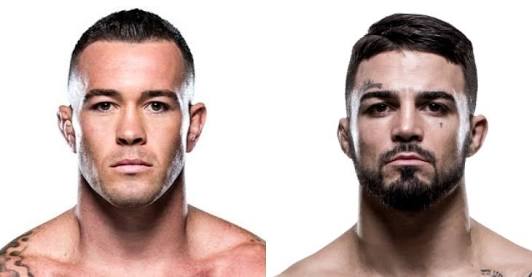 Griffin was the biggest underdog on the card but managed to defeat Orlando native Perry via unanimous decision.

Griffin had a massive 5 inch reach advantage.Needless to say Mike Perry is ly dangerous in the first round,Griffin weathered the storm by staying on the outside and hitting Perry with some solid jabs.

The second round was no different,however at the end of the round,Griffin landed a left hook on Perry dropping him.With a finish needed,Mike Perry came out with an urgency, as he obviously needed a finish,failing to get it.

Hey @PlatinumPerry, maybe having your ratchet horse faced girlfriend as your head trainer isn't the smartest idea on planet earth. But hey, when you're the product of cousins fucking in Ocala FL how strong can your decision making skills be? #UFCOrlando

With the Welterweight division packed with talent any match up is possible.However,Covington has been demanding a Title shot since October,2017 after his victory over Former Title Challenger Damian Maia.

Perry on the other hand has been called out by Darren Till in the past.

Covington,known for messing up with fighters online first gained recognition for his post fight interview after beating Maia where he called out Brazilian fans ‘A Dumb’.He further called the Brazilian fans ‘Filthy animals’ and said that they suck.

This lead to outrage all over in the MMA Community.Since Covington trains at American Top Team in Coconut Creek,Florida,Co-Founder of American and Brazilian Top Team Ricardo Liborio left ATT.This was followed by the departure of  veteran UFC Welterweight Ben Saunders for the same reason.

The outrage took a physical turn when Colby was confronted by Former UFC Heavyweight Champion Fabricio Werdum in Australia.Werdum attacked Colby with a boomerang and UFC authorities had to send Covington back home.

Previous article
UFC on Fox 28 Results: Jeremy Stephens defeated Josh Emmett via KO in Round 2
Next article
UFC: Middleweight Champion Robert Whittaker ready for a rematch against Yoel Romero at UFC 225 in Chicago