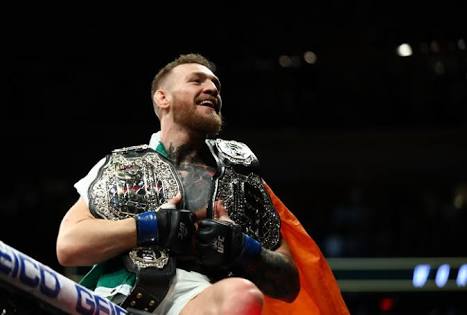 If you come at the Champ Champ Conor McGregor, you’d better not miss. In a TMZ video done recently, rapper 50 Cent referenced Conor McGregor in racially insinuatory terms, claiming that despite being a good athlete, that he is genetically inferior to the blacks.

Naturally, Conor McGregor did not take well to his comments and his comeback post on Instagram, carefully released on Women’s Day, was nothing short of savagery.

Posting a picture of 50 Cent, McGregor had this to say:

Happy international Women’s day everyone!
Get your tits out for the lads ladies. We love you ❤
Superior genes my big ballsack mate.
I am made of granite. You need a bra. You jabbed up fool.
Hahahaha you should have stayed quiet and promoted that fight for me on the free like you did. But you just kept going with them fucking memes.
Your 50, 50.
50 years old.
Fuck off.
It’s all love tho fifty serious, you are a mad bastard, but we still proper love a few of your tunes over on this side of the world.
I even blasted one of them on the free walking into madison square garden to take one of my belts.
It was called I run New York.

Conor McGregor and 50 Cent first got involved in a verbal altercation during the build up to the McGregor – Mayweather mega fight in 2017.

Ever since, the two icons have often taken shots at one another, but I think it’s safe to assume that none of banter has ever been so savage.

Conor McGregor is still the UFC Lightweight Champion but is on the verge of having his belt stripped after failing to defend it even once since he won it in December of 2016.

However, when undefeated contender Khabib Nurmagomedov and Interim Champion Tony Ferguson enter the cage at UFC 223, it is expected that they will fight for the Undisputed Title.

Do you think Conor McGregor crossed a line with his latest diss aimed at 50 Cent? Or is all fair in love and war?