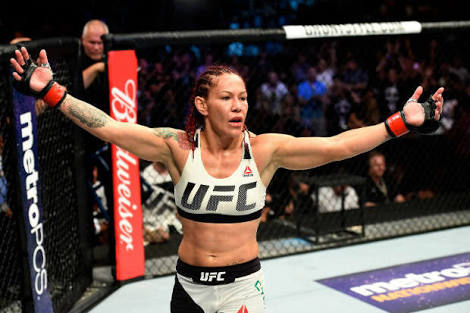 In March 2015, it was announced that Cyborg had signed with the UFC.Cyborg made her promotional debut at UFC 198 against Leslie Smith at a catchweigh bout of 140 pounds as there was no featherweight division in the UFC at that time.She won the fight by TKO in the first round.Cyborg faced promotional newcomer Lina Lansberg in a catchweight (140 lb) bout on September 24, 2016, at UFC Fight Night 95, referee stopped the fight midway through the second round after Lansberg could not effectively defend herself.UFC first introduced the featherweight division at UFC 208 where Germaine de Randamie took on Former Bantamweight Champion Holly Holm for the inaugural Women’s Featherweight Championship of the world.Randamie won the bout via Unanimous decision however Randamie was stripped of the title leading to a fight between Cyborg and Former Invicta FC Bantamweight Champion Tonya Evinger at UFC 216 on July 29 in California.Cyborg won the title via third round TKO.

On March 1,2018 as per the UFC tradition of ‘Open workouts’,the fighters have to assemble at the venue and perform a workout for their fans.

As Cyborg now trains at California, Cyborg was doing some padwork with her Coach Jason Parillo at the open workouts.After few minutes,a mysterious masked man came onto the stage and shot a ‘double leg’ on Cyborg,Cyborg defended further solidifying the man’s back into a rear naked choke position and removed the mask.(via YouTube):

The man was none other than Former Two weight (Lightweight and Welterweight) Champion,UFC Hall of Famer and Cyborg’s teammate BJ ‘The Prodigy’ Penn.Cyborg then did some  grappling work to call it a day at the open workouts.Other notable teammates of Cyborg include Former Middleweight Champion Michael Bisping and Former UFC Flyweight Ian McCall.Cyborg is also coached by Former UFC Light Heavyweights Champion Tito Ortiz.