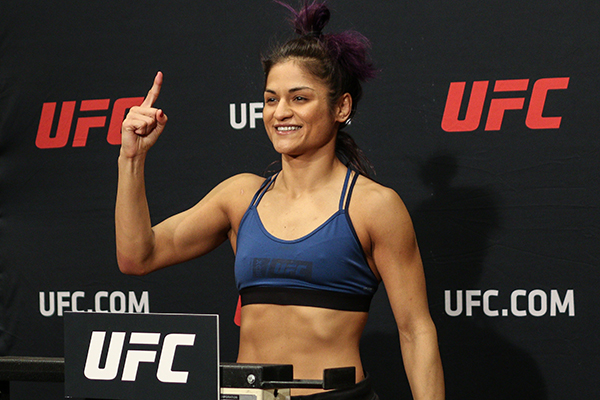 Cynthia Calvillo is understandably frustrated. The UFC star received a nine-month suspension from the Nevada Athletic Commission after she tested positive for Marijuana during the in-competition period of her fight against Carla Esparza back in December.

This was despite the fact that Marijuana is legal for both medicinal and recreational purposes in Las Vegas. Cannabis, however, is still on the prohibited list of the WADA code. Apart from the suspension, Calvillo was also fined 15 percent of her fight purse for the failed test.

The strawweight fighter appeared on the MMA Hour last day and during her appearance, she revealed that she is not happy with the whole situation.

“I really didn’t think I was doing anything wrong. I’m not trying to be a rebel, just, I don’t know. It just really, really sucks that I’m in this position right now.” She said.

She also slammed the commission for the nine-month-long suspension that she got.

“I’m the least person you need to worry about. The Nevada commission has fined people six months for (PEDs) but they’re suspending me nine months for cannabis, which is something I use for sleeping or inflammation which is not going to hurt me or my body and not hurt any opponent. … It’s legal there, there are a lot of people in the commission who are involved in dispensaries and in the business, so it just kinda sucks.” She added.

Even after all these setbacks, Calvillo is staying hopeful of keeping herself busy during the suspension period.

“I was really bummed out when I found out they gave me my nine-month suspension, but, it’s like, the show must go on, I’m going continue training and stay busy and hopefully these next six months will pass I’ll back come back stronger than before. Any other time I’ve ever had to be held down and held back I’ve always come back strongly. I just feel bad for whoever I have to fight next.” She concluded.

The 30-year-old is 6-1 in his career with her only loss coming against Carla Esparza.

Previous articleWWE: Daniel Bryan medically cleared to wrestle again
Next articleUFC: Paige VanZant is open to a potential WWE move in the future