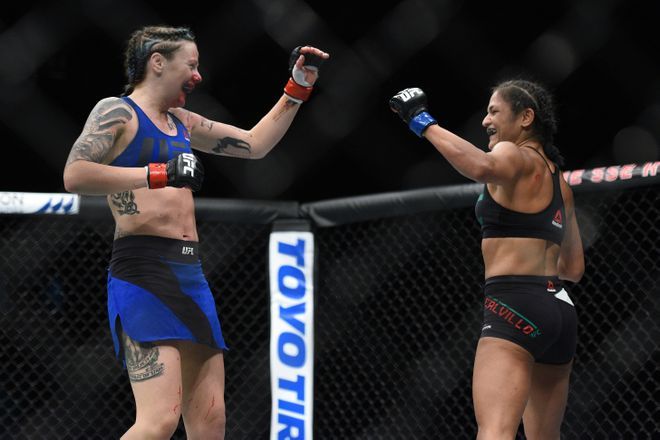 Gone are the days when fighters such could easily inject steroids in the their bodies and get an unfair advantage over their opponents. While in the pre-USADA era, usually both the fighters in a fight were on the ‘juice’. There are many legendary examples of steroid users in MMA, fighters such as ‘TRT’ Vitor, Alistair ‘Horse meat’ Overeem are the prime examples. However, things aren’t quite the same anymore. A few years ago USADA joined the fray and since then fighters have been constantly tested before and after the fights and are often handed out lengthy suspensions if found guilty of doping. Though, many times the USADA and the athletic commissions hand over rather unjust suspensions. For instance, Cynthia Calvillo never tested positive for steroids but instead was flagged for smoking marijuana. Calvillo is now back in the news, as she has now been suspended for nine months by the NSAC.

Calvillo is a high rated prospect who competes in the UFC’s strawweight division. She regularly trains at MMA legend Urijah Faber’s gym, Team Alpha Male, which is widely regarded as the best MMA gym for fighters of lighter weight classes. The American is one of the best strawweights currently in the UFC and has a MMA record of 6-1. Before pursuing MMA professionally, she competed as an amateur and has a amateur MMA record of 5-1.

Calvillo suffered the first loss of her professional MMA career at UFC 219 against Carla Esparza via a close unanimous decision. After the fight she was flagged by the USADA for failing a drug test due to marijuana metabolites.She was then suspended for 6 months by the USADA.

There had been some hearsay that NSAC might hand over an even more lengthy suspension to Calvillo. NSAC officials recently confirmed this news to MMA Fighting. The officials revealed that the fighter has been suspended for a whopping nine months.