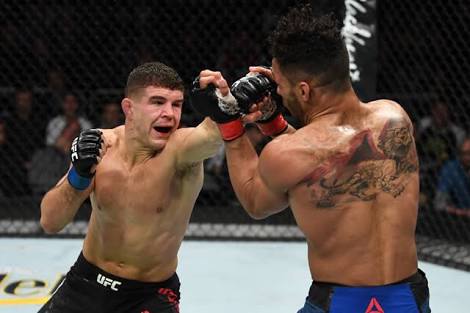 Iaquinta went in a fairly heavy underdog against Lee however managed to get the job done winning three rounds on two scorecards and four rounds on one. Iaquinta received a lot of praise from MMA community including former opponent and UFC lightweight champion Khabib Nurmagomedov. One of them was none other than UFC President Dana White. (via Twitter):

Looks like @danawhite is going to have some tough decisions ahead with the lightweight division! pic.twitter.com/scMypHgGNC

White and Iaquinta have had their differences before however a performance like that impressed the President as well who had nothing but good things to say about Iaquinta and also granted him a bonus. With the top tear of the lightweight division still in confusion after various lawsuits on champion Khabib Nurmagomedov due to post UFC 229 chaos, Iaquinta’s entrance in the top tear gives matchmakers some added options.

Iaquinta came out creative in the first round landing good shots including a spinning elbow. Contrary to his style, Iaquinta also attempted few takedowns on Lee. Lee established some rhythm in the second and third round having Iaquinta in a body triangle but unable to sink in a rear naked choke. In the fourth and fifth rounds however Iaquinta picked up immense pace and hurt Lee pretty badly with good shots like a left hook and a head kick.

Previous articleBen Askren: I volunteered to save UFC 233 against either Usman or Covington…and both said no!
Next articleUFC: Kevin Lee blames ‘tactical mistakes’ for tough loss in Iaquinta rematch