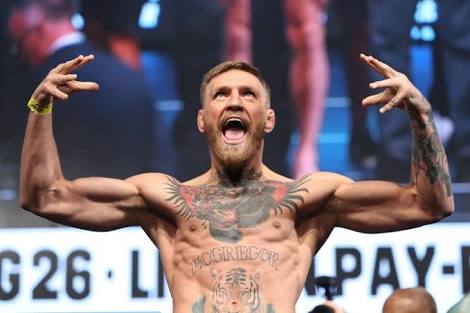 Drama at UFC 223 card continues. With the most anticipated match up between interim champion Tony Ferguson and Khabib Nurmagomedov off the cards, MMA fans were definitely in a state a disarray. However, featherweight champ Max Holloway stepped in to apparently save the card and things looked good to go. However that was not enough.

Twitter stormed with updates and videos of Lightweight champ Conor McGregor storming into the Arena and chasing chaos by damaging the arena premises after UFC 223 media day. UFC President Dana White who was at the scene,explains us what exactly happened in a live chat.

“Conor and approximately 20 guys apparently were let into the premises by the Mac Life (site that cover’s McGregor’s life in general) guys who were credentialed here.They opened the door for them, through an entrance, they stormed the building, got down to the loading docks were the fighters were getting into the buses and started to attack the buses with trash cans, dollies and stuff, broke one of the windows, cut Michael Chiesa really bad, he cut his head, cut his face”, White said.(via Twitter):

Conor McGregor is making his presence felt here in NYC. Felice Herrig just posted this clip of him on IG going a little wild. 😱 pic.twitter.com/arvUJF1pV2

Chiesa however was not the only victim as UFC Strawweight champion Rose Namajunas according to White, almost got hit, she had to get down the bus and walk to the hotel.A UFC employee also got hurt on his knuckles.(via Twitter):

White said that the fighters were cutting weight and this is the most horrible time and called it the most disgusting event in the history.

On legal aspects he said that the police have warrants of his arrest and they’re looking for him. McGregor’s flight can’t leave the state of New York and hence he is grounded and can be ‘sued big time’.

When asked about the update of fighters White said that Chiesa has been taken to the hospital for cuts, other fighters including women namely Namajunas and former title challenger Karolina Kowalkewicz were shaken up.

White on McGregor’s involvement said ,”McGregor was the one who threw the chair through the window,not only the people shooting inside the bus but people from outside the bus and security cams have the footage.” White said McGregor’s teammate Artem Lobov who was on the card has been taken off the card as well.The Mac Life people who allowed them in have also been arrested.

White on knowing McGregor personally said that,”I don’t know if he is on drugs”.White said with a recently born boy at home, McGregor shouldn’t have done this act.

White also said that if he had problems with Nurmagomedov, he should have taken the fight and fought him legally instead of sneaking in and doing this ‘criminal, disgusting, despicable’ act.

Our Footage of him entering and leaving Barclays Centre,Brooklyn-

Previous articleBreaking: Exclusive footage emerges of Conor McGregor arriving at Barclay’s center for UFC 223 and confronting Khabib’s team
Next articleBoxing: GGG vs Saunders in talks for the fall