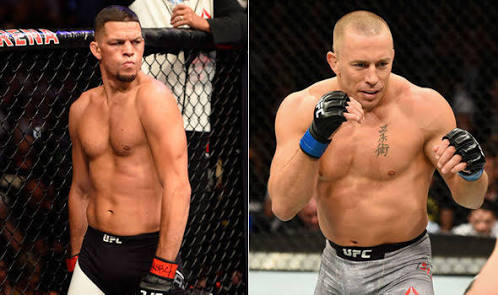 UFC 227 takes place on August 4, 2018 at the Staples centre in Los Angeles, California. The card already has one hell of a rematch as bantamweight champion TJ Dillashaw takes on former bantamweight champion Cody ‘No Love’ Garbrandt. However, the card has a chance to be one of the most notable cards in the history of the sport.

UFC President Dana White earlier confirmed on the ‘UFC Unfiltered Podcast’ that the UFC us working on a summer super-fight between former UFC middleweight and welterweight champion Georges St-Pierre (26-2 MMA, 20-2 UFC) and Nate Diaz (19-11 MMA, 14-9 UFC) at 155 pounds at UFC 227.

White was asked about the status if both the Diaz brothers by hosts former UFC welterweights champion and to be UFC Hall of Famer Matt Serra and Jim Norton.

White concluded saying, “It is true, and (St-Pierre and Diaz) would fight at 155 pounds”.

Georges St-Pierre last fought in his much anticipated return at UFC 217 in November 2017. He fought at a weight class above and still managed to beat the champion Michael Bisping to become the UFC middleweight champion. He then vacated the title and interim champion Robert Whittaker was named as the unified undisputed champion. Cutting to 155 would probably be the most biggest challenge for the Canadian legend.

Diaz last fought at the historic UFC 202 card in August 2016 in a rematch against former lightweight champion Conor McGregor. He lost the fight via majority decision.

White further explained his own layout for the card.

“There are rumors that we were doing Gustafsson versus Rockhold. That is true, but that is not for the interim title. That’s false. It might be L.A. I’m targeting L.A. In my perfect world, if everything goes perfect, which nothing goes (expletive) perfect in this world: (T.J.) Dillashaw versus (Cody) Garbrandt, GSP versus Diaz would be the co-main, Gustafsson versus Rockhold, and Derek Brunson versus Antonio Carlos Junior.”

In an appearance on the UFC Unfiltered podcast, top-ranked UFC Featherweight contender Brian Ortega opened up on a myriad of topics. Ortega weighed in...
Read more
Articles

Indian MMA star Ritu Phogat produced a dominant performance as she took on Cambodia's Nou Shrey Pov at ONE Championship: Inside the Matrix. Check out...
Read more
- Advertisement -