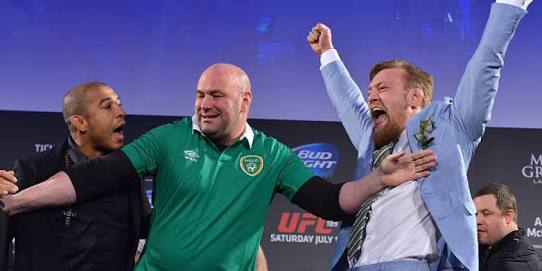 At the UFC’s 25th Anniversary Fall Press conference, President Dana White finally had the cat out of the bag as former UFC featherweight and lightweight champion ‘The Notorious’ Conor McGregor will make his much anticipated return to take on current UFC lightweight champion Khabib ‘The Eagle’ Nurmagomedov at UFC 229 on October 6.

The fight will probably go on the history books to be the biggest fight in the history of the sport. However, the best way to ensure that is to promote the fight with a world tour.

However Dana White confirmed there will be no world tour this time around.

“But I’ll do something fun and we’ll do some different stuff. I’m literally having a big meeting on Monday to get all this stuff in order and get it going.”

A world tour was scheduled when McGregor took on former champ José Aldo back at UFC 194 in 2015. The tour had stops in Aldo’s hometown of Rio De Janeiro and McGregor’s hometown of Dublin. McGregor also went on a tour during his boxing super fight against legend Floyd Mayweather where he visited major cities like London, Toronto,etc.