UFC: Dana White says he will meet Conor McGregor at UFC Liverpool to discuss about his future plans

The UFC will make it’s first trip to the land of scousers in Liverpool this weekend. The UFC has visited United Kingdom a lot of times, never before in the northwest city.

The Liverpool card has made a landmark of the first UFC card ever to be streamed live on BBC Sports. However it just got more interesting. UFC President Dana White will meet former UFC featherweight and lightweight champion ‘the Notorious’ Conor McGregor to discuss about his future plans. 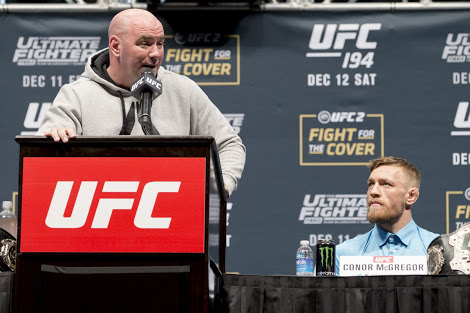 As a guest on ESPN’s SportsCenter today, White said that he will be meeting Conor McGregor to discuss about his future plans.

“We’re going to sit down and talk about his future and what’s next”, said White.

However he has been inactive since then which led to him being stripped of both of his featherweight and lightweight titles in December 2016 and April 2018 respectively. From the most successful superstar in the history of the sport, McGregor has turned into the most troubled star with respect to his future endeavors due to controversies.

Be it a heated moment with referee Marc Goddard at Bellator 187 in November 2017 to the infamous UFC 223 bus incident in April which has led him to face one felony and multiple misdemeanor charges. However White clearly stated that he won’t advice McGregor on his legal issues.

“Obviously, he has to deal with it in June. I’m flying to Liverpool this weekend for a fight there, and he and I are going to meet in Liverpool”, said White. “I have nothing to do with the legal issues, he’ll need to figure that out on his own.”

With White taking a special effort to attend an overseas show which is not a PPV, this could be a sign for bigger things to come for McGregor and his fans. The front runner to face McGregor is definitely the UFC lightweight champion and arch rival Khabib Nurmagomedov. McGregor has other options like a trilogy fight against Nate Diaz.

Previous article“Pipe-Bomb” – The REAL Story of CM Punk
Next articleWWE: Drew McIntyre reveals why the locker room has gone soft