UFC: Dana White shoots down the possibility of a Demetrious Johnson vs TJ Dillashaw super fight 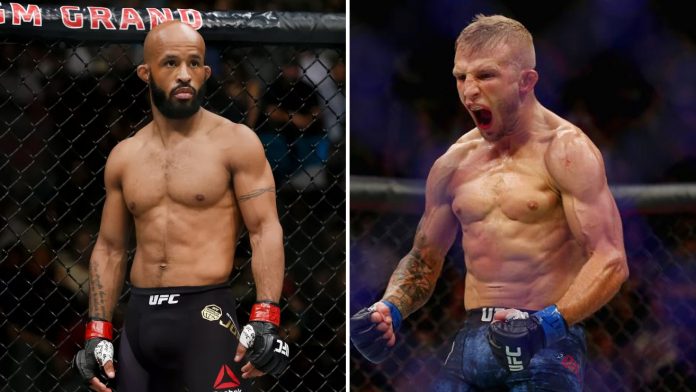 After much ado, the proposed Demetrious Johnson  versus TJ Dillashaw super fight has fizzled out into nothingness.

Initially one of the fights rumoured to co-inhabit the UFC 226 mega card during International Fight Week in July along with Stiple Miocic versus Daniel Cormier, it would seem that the Demetrious Johnson versus TJ Dillashaw fight will no longer be involved in the mix. 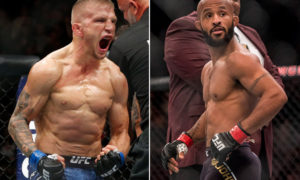 Texting LA Times, UFC President Dana White had this to say on the issue:

It [the fight] was never made. Plus, D.J. is hurt and out for a while.

It has been rumoured for months now that UFC Bantamweight Champion TJ Dillashaw will move down a weightclass and take on the first and only Flyweight Champion, Demetrious Johnson.

TJ Dillashaw won the Bantamweight Title back from former teammate and arch rival Cody Garbrandt at UFC 217 having lost it to former Champion Dominick Cruz early in 2016.

Demetrious Johnson, on the other hand, has been on a tear at Flyweight, racking up twelve Title defenses on the trot to break Anderson Silva’s all time record for successive Title defenses.

And having practically cleared out the division, it was expected that TJ Dillashaw would move down in weight and finally give Demetrious Johnson a tougher fight than all the other fighters in his weight division have done.

However, it has also been made public in a number of occasions that Demetrious Johnson’s dissatisfaction with the UFC’s failure to come up with a financially lucrative deal for the super fight could be a point of contention in the fight being made.

As such, it comes as little surprise that the sides weren’t able to agree on terms and had to give up on negotiations – at least according to Dana White.

Now, it is expected that Demetrious Johnson could fight Henry Cejudo a second time to defend his Flyweight Title while the Bantamweight division is in a state of flux, with a number of fighters one victory away from potentially fighting for the belt.

Who do you think should fight Demetrious Johnson and TJ Dillashaw next? Do leave your thoughts in the comments section below!