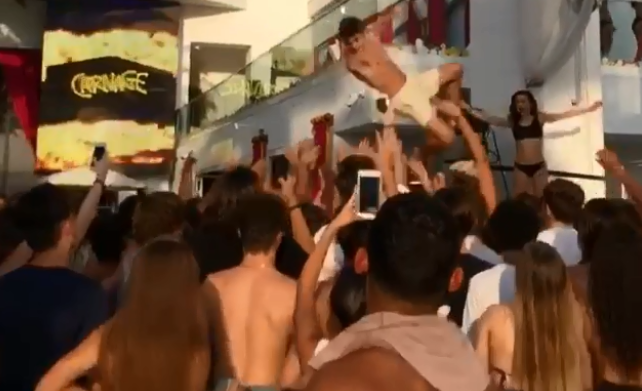 Dana White’s son, Aiden turned 16 years old and his father threw him a lavish party in Las Vegas. The event, “Aidan’s 16th Day-Night Party,” was hosted at the Drai’s rooftop pool on the Vegas strip and included musical acts Migos, Everlast, DJ Carnage, and A$AP Rocky, according to a report in the Las Vegas Review-Journal.

White told the Las Vegas Review-Journal: “We were wondering how we were going to top Dana’s party – but we did it. We’ve done nothing like this. Not even close.”

White said: “They brought out the big red button and we hit that. And a bunch of those high-pressure steam cannons went off, that brought the crowd from the pool inside. It was awesome.”

Aidan was later handed a UFC-style championship belt and at one stage even hinted he could have a go at the real thing himself – as he threw himself in the crowd. The six-hour party was at Drai’s nightclub, owned by White’s friend Victor Drai.

Dana White also rented out the Brooklyn Bowl and hired Kendrick Lamar to perform for his other son Dana’s 16th birthday party.