UFC: Daniel Cormier has a prediction for Stipe vs Cain – no prizes for guessing who wins 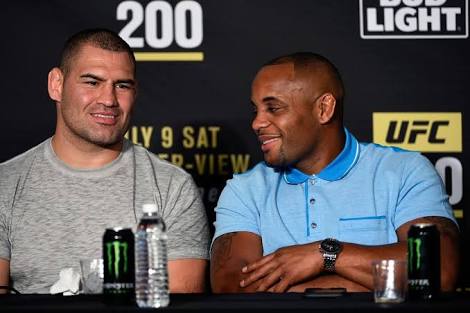 According to reports, former UFC heavyweight champion Cain Velasquez is ready to make his much-anticipated return after a two and a half year layoff.

Obviously, a suitable opponent is being discussed for the former champ and the frontrunner to face him is another former champ in Stipe Miocic. A fan suggested the above fight on Twitter however in the comment section came to a familiar face, in Velasquez’ training partner and double champ Daniel Cormier.

Light heavyweight champion Cormier took on then heavyweights champ Stipe Miocic for the heavyweight belt in a super fight at UFC 226 back in July. Miocic being the bigger man, stepped inside the octagon as a heavy favorite. However, Cormier pulled out a huge upset as he shut Miocic’s lights in the first round courtesy of a knockout. Cormier, however, took another dig at Miocic using some ‘MMA Math’. (via Twitter):

Don’t do that to Stipe! Look what I did to him and Cain is better ! https://t.co/5FDl4Ju7gb

Cormier, who believes Velasquez is a better fighter than him, claims Velasquez will defeat Miocic even more brutally than he did.

Cormier is slated to fight former UFC champ, Brock Lesnar, next. However considering Lesnar’s messed up a situation with the USADA, Cormier verbally ensured that Miocic would be the replacement if the fight does not materialize.

Previous articleTito Ortiz wants to really hurt Chuck Liddell: When he’s unconscious, I want to hit him again
Next articleTony Ferguson predicts that he would ‘easily break’ Conor McGregor