UFC: Daniel Cormier hits back at Jon Jones saying that he wants to beat him two more times

The current UFC light heavyweight and heavyweight champion Daniel ‘DC’ Cormier has had a long-standing rivalry with former UFC light heavyweight champion and former pound-for-pound kingpin, Jon ‘Bones’ Jones. The two have a great deal of animosity between them and they never fail to take a verbal shot at each other. Jones has controversially defeated Cormier twice before, however, one of those victories was canceled and was turned into a no contest as Jones later tested positive for using performance-enhancing drugs.

While Jones is still serving a ban, he still has not stopped taking verbal digs at his rival. In a recent interview, Jones claimed that he wants to defeat Cormier two more times. DC later finally took to Twitter to respond to Jones’ comments. 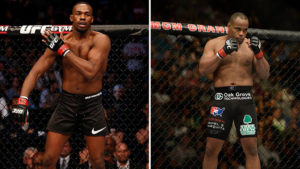 Cormier came into the UFC with an undefeated record with victories over many high-profile, top-level fighters such as Frank Mir, Josh Barnett, Roy Nelson, Dan Henderson, Antonio Silva, among many others. He had been extremely dominant and had a professional MMA record of 15-0, when he first fought Jones at UFC 182. Jones outclassed DC and even became the first man to ever take him down in MMA, winning the fight via unanious decision.

In their second fight at UFC 214, Cormier was the defending champion and the fight was much closer. Many media outlets even had Cormier winning the fight on their score-cards. However, Jones brutally knocked-out DC in the third round.

Their second fight was turned into a no contest and DC was reinstated as the champion, as Jones tested positive for turinabol. It should also be noted that their first fight at UFC 182 was contest in the pre-USADA era of the UFC.

Jones has recently done a interview with RT Sports. In the interview, Jones took a barb at Cormier and said that he would love to beat Cormier at least two more times. The “champ champ” was quick to respond and brought-up Jones’s failed drug test during their second fight, while also insinuating Jones was also probably on PED’s during their first contest.

Big goals for a guy that could only achieve them after he finishes getting disciplined for his 3rd drug failure! I mean jeez this guy #Cheater https://t.co/Kfuki7qRCM

Previous articleUFC: Dominick Cruz reveals the time when he and Michael Bisping almost got into a fist fight
Next articleUFC: Cub Swanson says he doesn’t mind people like Logan Paul fighting in the UFC