UFC: Darren Till believes Wonderboy not on his caliber 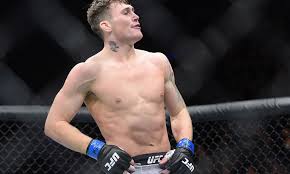 Darren Till who is headlining a fight card in his hometown of Liverpool against the 2 time title challenger Stephen ‘Wonderboy’ Thompson on May 27 believes that he is ready for everything that Thompson brings to the table and is ready to display that to the whole world.

Till insists that Wonderboy has made a grave mistake in accepting the fight and intends to shock the world by knocking Stephen Thompson out in the main event of UFC Fight Night 130.

Till on the state of the division

Darren Till is aware that some people think this match up is too soon for the rising star, but he believes that he has the capability to beat any difficult opponent in the division.

“All the tough fights against the Rafael dos Anjos, Colby Covington, Kamaru Usman, Santiago Ponzinibbio, Demian Maia and Jorge Masvidal – if I can’t fight them and beat them, then I’m not a real fighter,” Till said. “This is not a chance for me to beat someone easy. To be honest, I’m going to shock the world when I fight ‘Wonderboy.’ A lot of people are going to see. This is just another time I’m going to be doubted but I’m going to prove people wrong. I don’t want the guarantees, but I know what I’m going to do. I’m going to shock a lot of people.”

Till believes he got lucky with the fight

Wonderboy has said in an interview that he had limited knowledge of Darren Till and was reluctant to accept the fight against a lower ranked opponent. Many welterweight fights were booked in a short span and Wonderboy had no other option but to accept this fight. Till knows that he is very lucky to get this opportunity and intends to take full advantage of it.

“I don’t think ‘Wonderboy’ is scared,” Till said. “He’s beat everyone, and the only guy he’s lost too is the champion. I just think he had no option other than to fight me. I don’t think anyone wants to see a third fight with Tyron. Then I called him out and a lot of people wanted the fight. Then he said, ‘I’m going to give this up and coming guy a shot.’ So he’s giving me my shot and I’m going to take full advantage of it.”