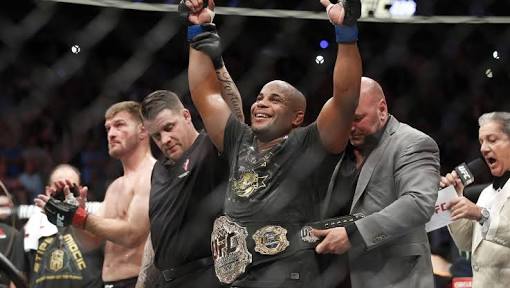 Former champ Stipe Miocic wants his belt back and he wants it ASAP.

Miocic took on light weight champ Daniel Cormier for the heavyweight belt in a super fight at UFC 226 back in July. Miocic being the bigger man, stepped inside the octagon as a heavy favorite. However Cormier pulled out a huge upset as he shut Miocic’s lights in the first round courtesy of a knockout.

In the attendance for the fight however was former UFC heavyweight champion Brock Lesnar. Lesnar then encountered Cormier inside the octagon leading to a rivalry of their own, thus destroying Miocic’s hope for a rematch.

An opportunity did present itself when UFC President Dana White selected Cormier as a suitable main event for UFC 230 in Madison Square Gardens. Miocic reportedly accepted the fight with zero training as he was taking care of his newborn baby. Since being a short notice fight, Cormier rather opted for #2 ranked contender Derrick Lewis. Meanwhile as Lesnar deals with his situation with USADA, Cormier has a simple message for Miocic. (via Twitter):

Keep those fingers crossed that Lesnar doesn’t fight, because if we do fight you definitely wont like what’s coming ur way!!!!! I definitely wouldn’t wanna be you in either fight! I’d rather fight me! https://t.co/fImC3ul7z4

Stipe ties the record for most number of title defenses in the history of UFC’s heavyweight division. Miocic certainly believes he deserves a rematch to reclaim his title. There are rumours circulating regarding Miocic welcoming back former UFC heavyweight champion Cain Velásquez.

UFC: Curtis Blaydes says Derrick Lewis had no business being in the cage with Cormier at UFC 230

Previous articleCurtis Blaydes understands why fans think he’s ‘boring’ – wants to prove a point in the Ngannou fight
Next articleWho’d you like to see Khabib Nurmagomedov defend his UFC lightweight title against next ..?