Henry Cejudo is recently coming off of the biggest win of his MMA career against Demetrius Johnson at UFC 227 in the staples center in Los Angeles.

With him winning a UFC Flyweight title, he is now under the radar of undefeated flyweight Deiveson Figueiredo who is on a four-fight fight winning streak. 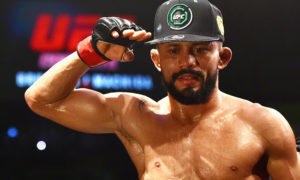 Figueiredo believes his résumé already should merit a shot at the new flyweight champion Henry Cejudo, a fight in which he says would be easy work:

“Hard training, easy fight. I go there for the kill,” Figueiredo told MMA Fighting. “That’s exactly how I envisioned myself knocking him out, man. I watched his fights, studied him, and saw that he always gasses after the first round, so I knew I would be able to finish the fight in the second.

“Knocking out the No. 6 flyweight gets me some power, I can ask for fights now. I knocked out someone that is hard to finish.”

A fight between Cejudo and Figueiredo is really compelling and it’s going to be a clash of style.