The UFC flyweight champion and the current greatest pound-for-pound MMA fighter, Demetrious Johnson is surely one of the coolest fighters around. Some of his hobbies that have made him really popular with the fans are that he is known to be an avid anime and Twitch gaming fan.

“Mighty Mouse” again proved how he is the epitome of coolness by recently posting a video on Twitter of him playing EA Sports’ UFC 3 game. In the video, DJ can be seen winning the match by submitting his opponent via an armbar. 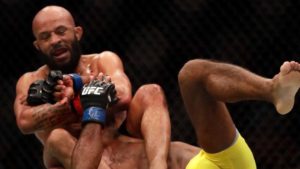 “Mighty Mouse” has a MMA record of 28-2-1 and is considered to be one of the greatest mixed martial artists of all time. He was previously a bantamweight contender and lost the only two fights of his career at 135-pounds against fellow legends such as Dominic Cruz and Brad Pickett. Since his majority draw against Ian McCall at UFC on FX 2, the flyweight champion has gone on to win twelve consecutive fights in a rather comfortable fashion. He also recently broke the UFC record for the most consecutive title defenses in history (11) against Ray Borg at UFC 216. He is currently on the verge of being booked in a super-fight against UFC bantamweight champion, T.J. Dillashaw. However, if rumours are to be believed then he might end up defending his title against top contender, Henry Cejudo.

Johnson is famous for doing live sessions of his gaming adventures for Twitch, which is a live streaming video platform and a subsidiary of Amazon. The website is pre-dominantly famous for broadcasting e-sports. He was recently doing a live streaming session of him playing UFC 3 as himself. He was competing against an opponent who was playing as Sergio Pettis. The opponent got caught in the guard of “Mighty Mouse”, and soon ended up tapping to a slick submission. As the champion was celebrating his victory, the opponent got disappointed and “salty” by his defeat and disconnected the bout.

Johnson’s UFC 3 skills are seemingly super slick. As for all MMA fans out there, since the champion plays the online mode so often, let’s cherish the fact that you might get to play against Johnson in the online player mode.