Ultimate Fighting Championship (UFC) officials have announced Diego “Nightmare” Sanchez will fight in Texas in over four years when he faces British finisher Craig White in a UFC 228 welterweight bout at American Airlines Center in Dallas on September 8. 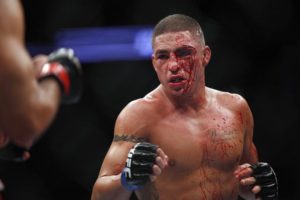 Diego Sanchez (27-11) last fought at UFC Norfolk in November, where he was brutally knocked out in the first round by Matt Brown with an elbow shot. Sanchez is a veteran of the UFC who has been competing for 13 years. He has shown signs of rough and tear as he has been finished in three of his last four fights.

White (14-8) made his UFC debut in May, stepping in on just 12 days’ notice to fight Neil Magny at UFC Liverpool.  “The Thundercat” came up short as he suffered a first-round knockout.