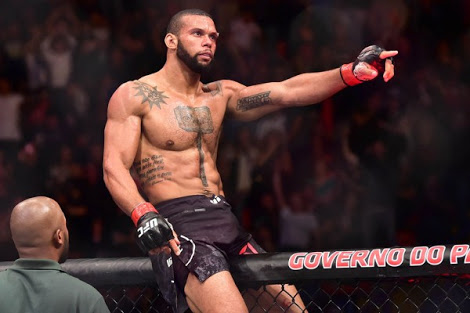 UFC Fight Night 137 in Sao Paulo, Brazil featured an absolute slugfest as middleweight Thiago ‘Marrheta’ Santos moved up to light heavyweight to take on another middleweight moving up in Eryk ‘Ya boy’ Anders.

Just like the build-up being dramatic, the ‘Fight of the Night’bout also ended with a bit of controversy. An exhausted Anders had Santos pinned to the cage. Referee Mark Goddard chipped in to separate and give Anders the similar position. Anders who looked for the takedowns via double leg didn’t have enough energy to complete it and was hammered with fists and elbows until the round was finished. Anders was unable to reach his corner and fell down twice while doing so ultimately leading to the stoppage.

To take understanding to a whole new level were experts Dominick Cruz and Paul Felder on the post-fight show. (via Twitter):

Cruz was impressed with both the fighters. Cruz applauded Anders for taking down Santos in the first round. However, Cruz pointed out the fact that Santos stuffed takedowns as the fight progressed. Felder, on the other hand, was impressed with Santos’ leg kicks and body kicks along with constant switching of stances.