UFC: Dustin Poirier reveals what changes he will make in his rematch with Eddie Alvarez to get the finish

Dustin Poirier and Eddie Alvarez were absolutely tearing the house down at UFC 211. However, their fight was soon stopped and turned into a no contest due to Alvarez striking Poirier with some illegal knees. Poirier had Alvarez seriously hurt in the first round of the fight but failed to finish him as Alvarez recovered and strongly fought back. 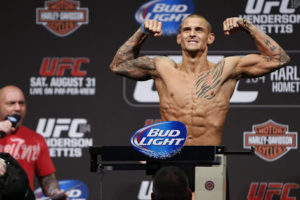 Poirier in a recent interview with MMA Fighting revealed what changes he will make in this fight to make sure he finishes Alvarez this time around. Here’s what he had to say:

I just need to sharpen up. My patience is better. I’m more experienced, I’m more mature now. Those kind of things got me in trouble in the last fight. When I hurt [Alvarez], I went crazy trying to get him out of there. I had a similar thing happen in the Gaethje fight — I hurt him, but that time I was a little bit more patient and I put him away.

This time when I hurt Eddie, I’m going to take my time. I know that I did it with skill, this stuff doesn’t happen by chance. So if I do hurt him, I can take my time and put him away. And if I don’t put him away there, then it’ll happen again, I’ll hurt him again. You’ve just got to stick to that and keep it clean, man.

UFC: Eddie Alvarez says that he will not fight until he gets a new contract

Previous articleUFC: T.J. Dillashaw claims he’s going to ‘ruin’ Cody Garbrandt’s career at UFC 227
Next articleUFC: Daniel Cormier names the other fighters that he thinks belong in the ‘Greatest of all time’ debate with him