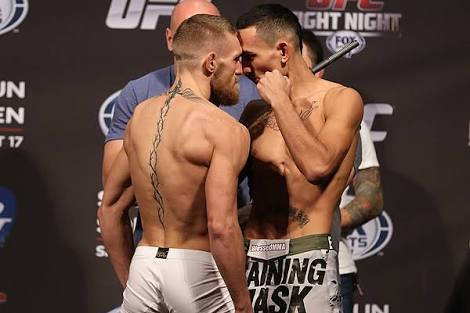 Recently former opponents UFC Featherweight champion Max Holloway and UFC Lightweight champion Conor McGregor have been going back and forth with each other on Twitter.

On March 5,McGregor posted a picture with him featuring in a Burger King Commercial.First he posted,”There are two kings in this picture and only one in the fight game. Forget the rest. Big news on the way”.(via Twitter):

There are two kings in this picture and only one in the fight game. Forget the rest. Big news on the way. @burgerking. #ad pic.twitter.com/aayNQuFDxP

After 3 hours,McGregor confirmed that he will be featuring in the Burger King advertisement.He posted,”The Undisputed Champ Champ and the Undisputed Spicy Champ.”(via Twitter):

However, it didn’t took much long for featherweight king Max ‘Blessed’ Holloway to mock McGregor as he replied,”You went from being king of Ireland to king on ‘chicken’?Looking forward to two strips meal coming April 7.PS Shout out to the real fighting Irish.The one’s who value what’s in heart before what’s on waist.Hawaii respects you and welcomes you with open heart.”(via Twitter):

You went from King of Ireland to King of "chicken"? Looking forward to the two strips meal coming April 7.
PS Shout out to the real fighting Irish. The ones who value whats in heart before whats on waist. Hawaii respects you and welcomes you with open arms https://t.co/kqyiAw3PDY

Holloway pun intendedly said ‘two strips meal’ referring to the fact that McGregor would be ‘stripped’ from the UFC Lightweight Championship on April 7 at UFC 223 where Khabib Nurmagomedov meets Interim Champion Tony Ferguson as confirmed by UFC President Dana White.

McGregor and Holloway also had a blistering twitter attack on each other after UFC 222 on March 3,2018.UFC 222 featured an exciting co-main event between former Lightweight Champion Frankie ‘The Answer’ Edgar and undefeated prospect Brian ‘T-City’ Ortega.UFC 222 was originally scheduled to be Holloway’s second title defense against Frankie Edgar.However Holloway pulled out from the card due to an injury and was replaced by Ortega.Edgar could have just waited for Holloway to recover but instead decided to fight Ortega. His decision backfired and Ortega became the first fighter ever to finish Edgar in his 13 year career.

Holloway reached out to Edgar with a classy tweet.(via Twitter):

McGregor replied referring to Holloway pulling out of the fight.(via Twitter):

Kid, you bounced. Leave it.

Oh we talking bout bouncing now?Don’t like my tweet? Your coach did. Go ask him why. Maybe you'll find what you lost. https://t.co/ekoxh7bUaw

UFC: Conor McGregor says it should have been him defeating Frankie Edgar at UFC 222