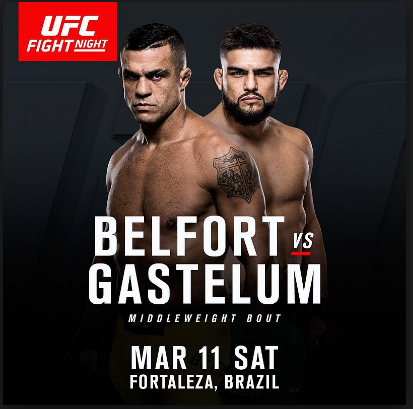 The UFC is back with another event, one week after a lackluster yet entertaining UFC 209. This time it’s a Fight Night, to be held on March 11, 2017 at the Centro de Formação Olímpica do Nordeste in Fortaleza, Brazil. Headlined by Middleweights Vitor Belfort and Kelvin Gastelum and also featuring exciting fighters such as Edson Barboza and Tim Means, this promises to be a fun event.

Let’s take an individual look at the fights.

Vitor Belfort looks old. And it looks like he aged very rapidly since getting off TRT (Testosterone Replacement Therapy). Known as TRT Vitor at the time, Vitor Belfort revitalized with TRT looked like one of the most dangerous fighters of all time and was knocking contenders left and right, even after having been fighting for almost a decade and a half. Ever since TRT use has been made illegal, it looks like Vitor’s body has not reacted to it very well. While he still has the wisdom of a fighter who has been doing this for two decades, his explosiveness is all but gone now. It is safe to say that Vitor’s best days are behind him. Having said that, ‘The Phenom’ is still, well, a Phenom. What Vitor Belfort brings to the table is dangerous and skilled striking, and possesses enough power in his old hands to put any one to sleep.

This is Kelvin Gastelum’s second straight fight at Middleweight and he is coming off a spectacular third round TKO of Tim Kennedy – a beating that sent Kennedy straight into retirement. Kelvin’s confidence must be at an all-time high, as he has beaten Johny Hendricks and Tim Kennedy in back to back fights after losing a closely contested fight to Neil Magny. Kelvin has a wrestling background, but no one would guess that if they look at his boxing. Kelvin is a neat striker who has great movement and looks faster than ever at Middleweight. His wrestling is world class too and he can dominate a fight on the ground with his 10th Planet Jiu-jitsu.

Vitor needs a win here to revitalize his career and the UFC has not made this task easy for him by putting an extremely dangerous opponent in front of him. Vitor would like to keep the fight standing and utilize his reach and size advantage. Kelvin, on the other hand, has the edge in both striking and wrestling.

Prediction: Vitor is probably not going to win this fight. Prime-time Vitor would have given Gastelum a very tough fight, but the former Light Heavyweight champion will probably find Kelvin making another big statement in the Middleweight division. Gastelum will probably look for a takedown and ground and pound his way to victory.

The Pick: Kelvin Gastelum by TKO

This event almost has a theme to it: former Light Heavyweight champions who are getting old. Second on that list is Mauricio ‘Shogun’ Rua, who is a former UFC Light Heavyweight champion and former Pride Middleweight Grand Prix winner. With victories over the likes of Quinton Jackson, Antônio Rogério Nogueira, Alistair Overeem,
Mark Coleman, Chuck Liddell, Lyoto Machida and Forrest Griffin, ‘Shogun’ is one of the greatest fighters of all time. But even his best days are behind him, as he has gone 5-6 after winning the Light Heavyweight championship. Mauricio has now won two in row and is looking to extend his win-streak to three, for the first time since 2007!

Gian Villante is a great athlete but has had mixed results inside the Octagon. The former NFL (National Football League) prospect is 5-4 in the UFC, with his most notable victory being against Corey Anderson (who ‘Shogun’ also beat). He has a wrestling background but generally likes to brawl. He is powerful and is certainly quicker than his older opponent.

These guys matchup pretty well and this has the potential to be a slobber-knocker. Rua has great Muay Thai and has a great chin; he won’t avoid a brawl if he gets sucked into one. Villante is younger, so that gives him the edge in quickness and athleticism.

Prediction: This match is definitely a toss-up. ‘Shogun’ still has a couple of fights left in him and still believes he can hang with the younger guys in the division. Villante is powerful, but I don’t see him knocking Rua out. I will put my money on Rua to win a unanimous decision.

The Pick: Mauricio Rua by decision

In a fight of a Lightweight contender and a prospect, Edson Barboza will take on Beneil Dariush. This could be another fight of the night contender. Both guys are looking to expand their win-streak to three and a win here could be huge for both fighters, but especially for Dariush, who will look to break into the top five with a good performance here.

Edson Barboza is still best known for his wheel kick knockout of Terry Etim, one of the best knockouts in UFC history. Since then, Edson has had some good wins, but always lost the big ones. This seems to be changing, as he is coming off back to back victories over Anthony Pettis and Gilbert Melendez. A loss here would be catastrophic as Dariush is ranked below him.

Barboza is one of the best strikers in MMA and definitely one of the most exciting. A Muay Thai practitioner, ‘Junior’ is known for his punishing leg kicks and knockout power. His takedown defense has also improved and it is much harder to take him down now.

Beneil Dariush’s biggest strength is his World Championship grappling, with which he can dominate any fight. He is accomplished at striking, training under famed striking coach Rafael Cordeiro.

Dariush can definitely hang on his feet against Barboza, but Barboza has a definite edge at standup. Similarly, Barboza has good takedown defense but Dariush has the edge at grappling and is very dangerous from top-position. Dariush is criminally underrated and this is a huge break-out opportunity for him.

Prediction: Barboza will look to maintain the range with his kicks and will try to keep the fight standing. Dariush will try to take the fight to the ground, which is his best area and also Barboza’s biggest weakness. Dariush can get that takedown and can definitely control the fight on the ground.

The Pick: Beneil Dariush by decision

In a Flyweight matchup, Brazilian Jussier Formiga will take on the young and exciting prospect Ray Borg. This is a very interesting matchup, as it pits number three ranked ‘Formiga’ against number eight ranked Borg. A win here could put ‘Formiga’ in contention for a title shot.

Jussier Formiga has done well since coming to the UFC and his losses have only been against the top contenders. He is an exciting fighter who is dangerous on the ground and also very good at taking the fights there with his Judo.

Ray Borg is a young prospect who is coming off a win over Louis Smolka. He has good wrestling and this makes this fight very interesting. Another interesting aspect of this fight is weight. Borg has missed weight twice in his last three fights and while his bigger size does give him the strength advantage, one has to wonder at what point do the returns start to diminish.

Prediction: This fight is probably going to be wrestling heavy with the more experienced Formiga getting the advantage. Jussier Formiga will probably pull out a submission on the ground en route to a title shot.

The Pick: Jussier Formiga by submission.

In this Bantamweight matchup, number nine Bethe Correia will take on number 13 ranked Marion Reneau. Both the fighters are coming off a win and would like to get on a win streak with a victory here.

Bethe Correia is former title challenger and is primarily a boxer. She likes to stay on her feet. She is pretty technical but seemingly lacks knockout power. She can pick her opponents apart but has mostly gone to a decision in her wins.

Marion Reneau is coming off a TKO of Milana Dudieva and would like to stop Correia as well. She has good standup but is very good on the ground. She has the size advantage in this fight and can control Correia on the ground, should she take her down.

The Pick: Marion Reneau by submission

In a rematch of their bizarre UFC 207 fight which ended in a confusing no-contest, Tim Means and Alex Oliveira will run this one back to have a definitive ending. In their original fight, Means connected on an illegal knee to a downed Oliveira, which he said he intended to throw because he thought it was legal. This should arguably have resulted in a disqualification loss for Means. The bout, however, was declared a no-contest.

With no confusion over the rules this time (hopefully), we will probably have a more definite ending to the fight. There is quite a lot of bad blood between these two men and both are properly motivated to have a good performance here.

Both men are strikers and there might be fireworks here. This makes this another fight of the night contender. Both men are good grapplers as well, so stylistically the match is very even. Both fighters were on a two fight win-streak before their last encounter and that’s another similarity between the two.

Means is the more experienced of the two and holds the size advantage. In a fight that looks close on paper, this could be a deciding factor.

Prediction: Both men like to strike so the fight will probably mostly be a standup battle. Some wrestling may come into play against the cage. I expect the more experienced Means to dig deep and pull out a stoppage of a tough Alex Oliveira.

The Pick: Tim Means by TKO

Overall, while the card is not heavy on name value, the matchups definitely seem fun and this is the sleeper card of the year so far. I expect an entertaining night of fights with some important matchups that will decide the fate of a few fighters going forward. This event is definitely one to tune into.