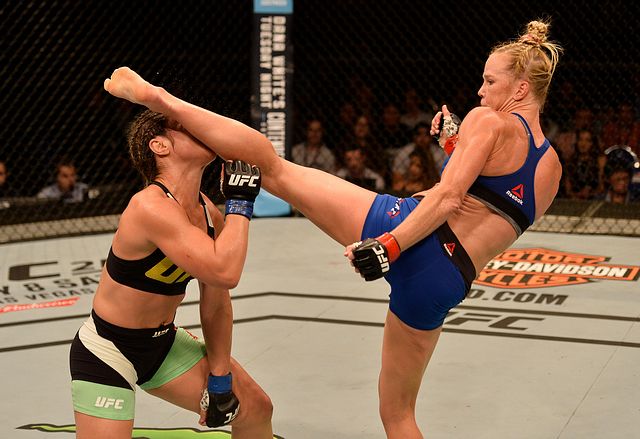 Just when you thought the main event was going to make your night longer, out of nowhere comes a Brazilian Kick and BOOM! Down goes Bethe Correia.

The main event headliner fight between the former women’s bantamweight champion Holly Holm and former challenger Bethe Correia started off on a slow note, as both the fighters hesitated to engage in the first round. Holly knew it was a do or die situation for her as she was on a three-fight losing streak and any miscalculation could lead her to another disappointment. Holly was more careful in picking her shots while Bethe was patiently waiting to counter any strike thrown at her. Mike Goddard the referee had to interfere and warn both the fighters to push the pace and engage. As the fight progressed, Bethe became more confident and continued to dis-regard the striking accuracy of Holm. Holly landed her trademark left high kicks and oblique kicks which Bethe responded with her own spinning back fists. In the third round, Holly found her range, landed that perfect head kick placing her shin to Bethe’s face and finished her with a left hook.

In the co-main event, Marcin Tybura got to face his long-time favourite fighter Andre ‘The Pit Bull’ Arlovski. With four losses in a row, Arlovksi had his back against the wall and had to register a win against the upcoming Polish heavyweight Marcin Tybura. Andre made the necessary adjustments but that was not enough to put off Tybura. It was a back and forth action all through the three rounds, with Tybura getting the unanimous decision.

Colby Covington and Dong Hyung Kim both had no love lost when they met inside the cage, but the fight didn’t live up to the expectations as both the fighters promised. But Covington got the win using his wrestling background and neutralized Kim’s striking & Judo.

Another former champion Rafael dos Anjos came back with a win in his welterweight fight against Tarec Saffiedine. This move to welterweight division comes after Dos Anjos lost his belt to Eddie Alvarez and kept him side lined for months. From the moment he entered the cage, Dos Anjos was eager to get his hands on his opponent and grab the much-needed win for this return. Saffiedine was a good test for Dos Anjos as he possessed both striking and ground game for a #11 ranked fighter. The left kick to the body from Dos Anjos changed the momentum of the fight as Saffiedine was unable to put away Dos Anjos on the feet and the ground. With this win, we’ll have to see where Dos Anjos will be in the welterweight ranking and how long does it take for him to make a title run in this division.

Jon Tuck made a quick work of the Japanese lightweight legend Takanori Gomi by submitting him in the first round. Gomi is now on a four-fight losing streak and hasn’t been himself since his KO win over Tyson Griffin back in 2010.

Another fight that lasted just one round was between the heavy weights Walt Harris and Cyril Asker. The 6.5” Walt Harris made it look easy and put on an impressive performance in his second stint with the UFC by dropping the French heavyweight with his heavy hands and getting a TKO victory.

Though the night didn’t go in the favour of Takanori Gomi; his two other country men – Naoki Inoue and Yuta Sasaki grabbed wins respectively. While Inoue continued his win streak and stayed undefeated by taking a decision win, Yuta made his opponent Justin Scoggins tap with a rear naked choke in second round to win the fight bonus.

The fight of the night award was well deserved one between Jingliang Li and Frank Camacho. Li grabbed a unanimous decision win over the debuting Camacho as both the fighters displayed their heart and grit all through the three rounds. Li landed heavy leg kicks which eventually slowed down Camacho who came in as a late replacement.