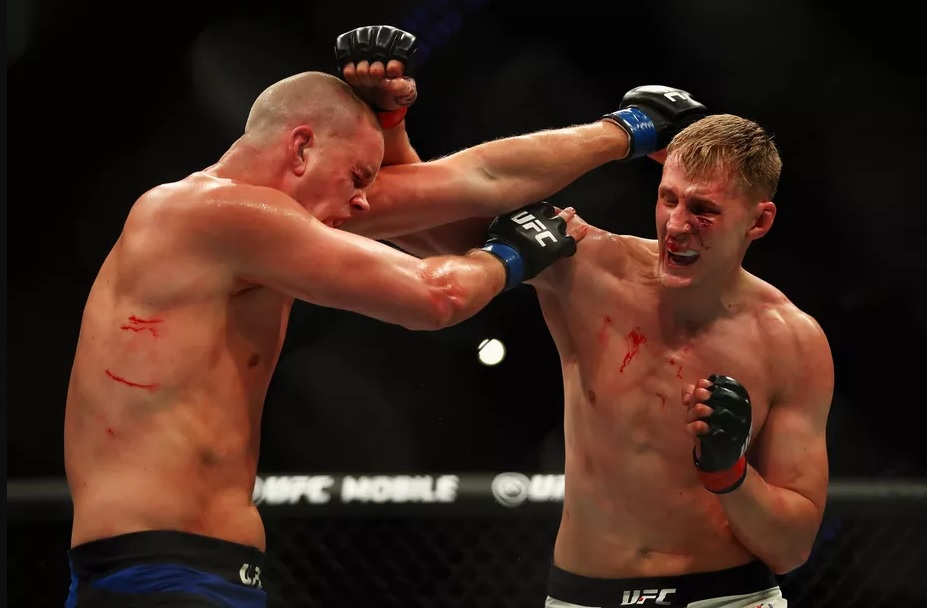 Last night’s event did not disappoint a bit as fighters put on a show and grabbed many bonusses. Heavyweights Alexander Volkov and Stefan Struve both received a $50,000 bonus for putting on the Fight of the Night while Mairbek Taisumov and Zabit Magomedsharipov received Performance of the Night bonuses. 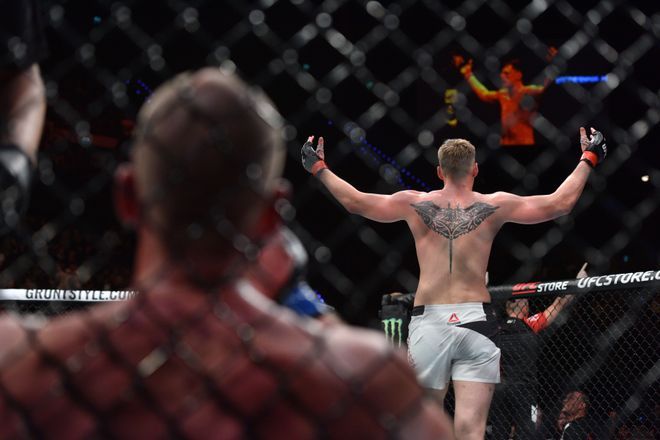 Volkov smiles as both the men meet in the centre of the octagon. Volkovstarts the round by being the first to attack but in the process, gets tagged by a straight right from Struve. Struve lands few leg kicks as he keeps finding his long range. They both clinch but Struve manages to break out and continues to land jabs. Struve is the one pushing forward as he measures the Russian. Volkov trips Struve to the ground, but could not keep him there as Struve comes back with a big upper cut. His long rangy hands are finding the target more frequently. Struve lands a heavy knee to Volkov’s mid-section pushes him back and comes back with jumping flying knee that lands on Volkov’s face. Volkov is cut under his left eye and bleeding but unfazed he manages to finish the round with some punches on the Dutchman. Round 1 goes to Struve.

The smile on Volkov’s face is nowhere as the second round begins. Struve continues to land with his long limbs but mistakenly grazes Volkov’s right eye and he is forced to take a pause. Referee resumes the fight and Struve lands a right but Volkov responds with a huge uppercut and a right hand. Struve is now rocked and learns of his opponent’s punching power. As they continue to exchange, Volkov gets another poke in his eye. Referee somehow doesn’t deduct a point from Struve. They resume and Volkov shows some urgency as he lands low kicks, body shots and punches to the head. Struve backpedals and is bleeding from his nose. Round 2 goes to Volkov.

As the third-round opens, both the heavyweights eye poke each other and get warned by the referee. They resume and Volkov pushes forward with heavy right hand. Struve responds with his own punches but gets caught with a low leg kick and stumbles to the ground. Volkov lands a right hand as he pressures the Dutchman. A quick combination os uppercut, left hook and uppercut from Volkov has Struve covering up and clearly hurt. He is back against the cage and gets dropped by heavy hands. Volkov smells blood and unleashes some more, but the referee doesn’t want him to take any more punishment and stops the fight. 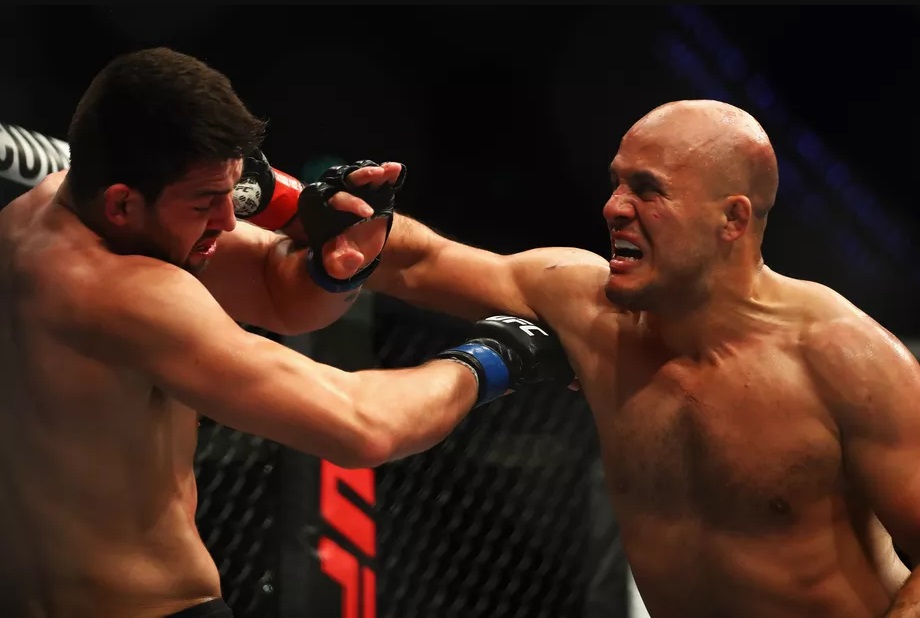 For a welterweight, Siyar looks pudgy and out of shape between the two. Wilkinson is cautious as the round begins and lands a head kick that is caught by the Afghan and pushed the floor. Wilkinson is now back to the feet and throwing in exchange of Siyar’s punches. Wilkinson gets the first takedown but Siyar gets back up ad they clinch again. Siyar manages to escape and lands a body kick taking Wilkinson to the ground with a D’arce choke but unable to capitalize. Wilkinson clinches Siyar against the fence as the round comes to and. Round 1 goes to Siyar.

As the second round begins, Siyar rushes forward but gets caught with a straight right from Wilkinson. Siyar lands a hard-over hand right and pushes him backwards but lands another punch. Wilkinson is hurt and Siyar is now unloading punches making Wilkinson stumble on his feet as he backs out. Wilkinson is now on the canvas unable to protect himself. Siyar keeps unloading and the referee steps in to stop the fight at 3:10 secs. 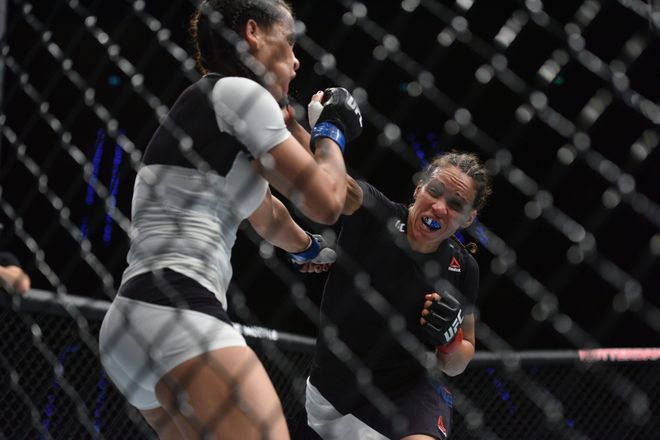 Both the bantamweights meet in the centre as the round begins. Marion pressures forward with her jabs. Talita goes for a double and takes Marion to the ground who responds with a triangle from her back. Marion locks her feet to the back of Talita’s knee and drops her to the ground. Marion again attempts for a triangle, switches to an armbar but unable to finish. Talita from the top puts her entire weight on Marion and switches to a north-south position. She then takes the back position and pulls Marion back. Talita gets the top position again as the round comes to an end. Round 1 goes to Talita

Marion charges forward in the second round wanting to land more punches. She pushes Talita back with her straight right hand. Talita goes for another takedown but Marion wants none of it. Marion keeps the pressure as she backs Talita to the fence using her punches to body and head. Again, Talita goes to the ground but Marion wants her back to the feet. Another takedown attempt, but this time gets Marion to the floor. Marion lands knee as she gets back up and pushes Talita to the cage with a right undertook and short elbows. Round 2 goes to Marion.

Third round begins and Marion comes out guns blazing and fails Talita’s takedown attempt. Talita is determined to take the fight to the ground and drives Marion to the canvas. Marion while being on her back attempts to an armbar and then triangle. Talita escapes and continues to put her weight on Marion. It’s a ground slug fest and Marion gets the top position and spins around to get the back of Talita. Marion lands heavy shots from the top as Talita turtles up and covers. Referee has seen enough and interferes to stop Marion from doing any more damage at 4:54 secs. 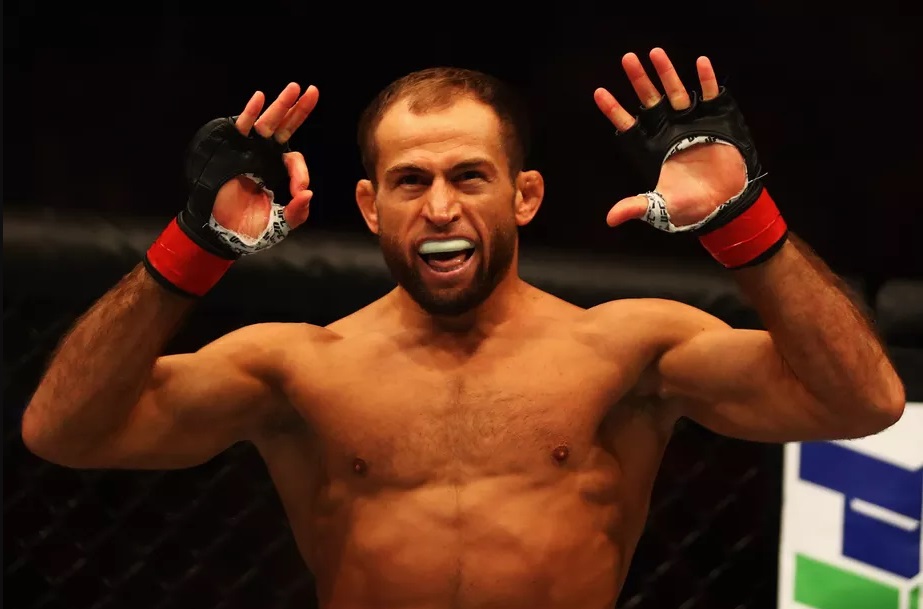 Taisumov is being cautious as he keeps circling and moving away from the Brazilian. Taisumov misses with a big right hand as he looks to finish the fight early. Silva continues to move forward but misses with a right hand of his own, but as he moves in gets countered with a huge right from Taisumov. Silva lands face first on the floor as referee stops the fight. Taisumov lands a big victory by stopping the fight in just 84 seconds. As he gets rewarded with $50K, Taisumov calls out the UFC management to give him a top 10 lightweights in his next UFC outing. 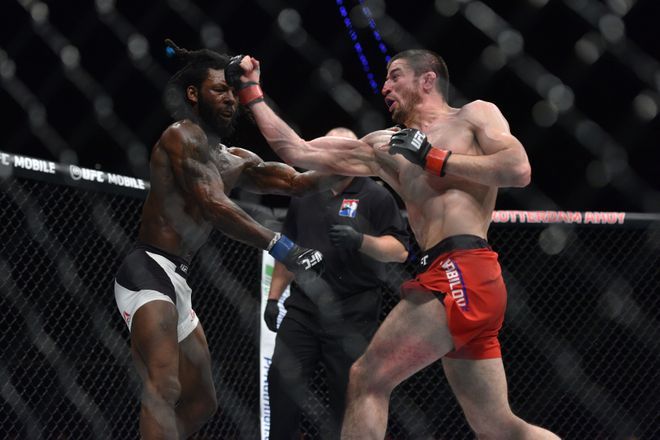 In the opening round, Rustam lands a beautiful belly-to-belly suplex. As they try to get back up Rustam goes in for a takedown, which Green tries to stuff it. Rustam gets his take down and up comes Green again. Rustam still has his hands wrapped around Greens waist not letting him go anywhere. As they separate, Rustam lands an uppercut and Green lands a straight left. Round 1 goes to Rustam.

Second round opens and there is not much action as both fighters start to feel each other. Rustam lands a kick and left hook as Green lands few leg kicks in return. Rustam goes back for a takedown but is denied. Green is now getting used to the takedowns and stuffs the easily. This round goes in favour of both.

In the third round, a groin shot from Rustam lands a low blow to Green making him take a pause to recover. Nothing much happening in this round except for few shots from Green. This time Green looks for a suplex of his own, but Rustam sees it coming and manages to escape. As the third round comes to an end, Green gets a take down and the back of Rustam. 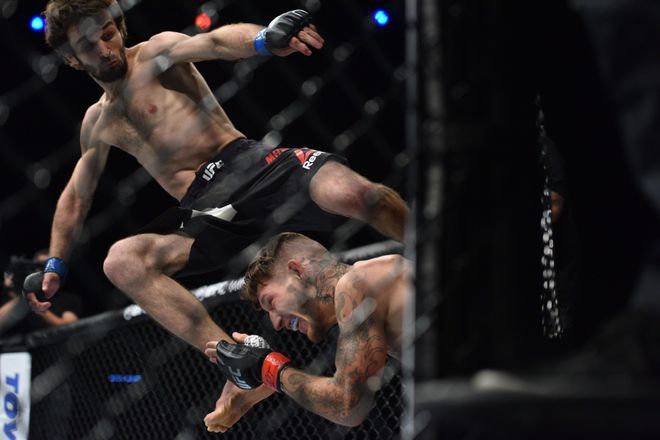 It’s a pressing action in the opening round as Zabit lands a spinning kick on Santiago’s midsection. They both clinch but Zabit turns around and tries to put Santiago to the canvas. They separate and Zabit lands a straight right to the body and an uppercut while moving back stunning Santiago, Zambit does the showtime kick but misses. Santiago goes in for a takedown but is stuffed and eats a knee from the clinch. He is still gunning for the takedown but Zabit manages to ward it off intelligently. As the round comes to a close they both exchange kicks and Zabit taking his back. Round 1 goes to Zabit.

In the second, Santiago shows some urgency and move forward but eats jabs and low kicks instead. Santiago goes for a single-leg takedown but gives his back to Zabit who is now looking for a rear-naked choke. Santiago defends with a kimura attempt but is not in an advantageous position to execute it. Zabit lands some strikes and finally gets the hooks under the chin with a rear-naked choke. At 4:22 secs Santiago taps out. 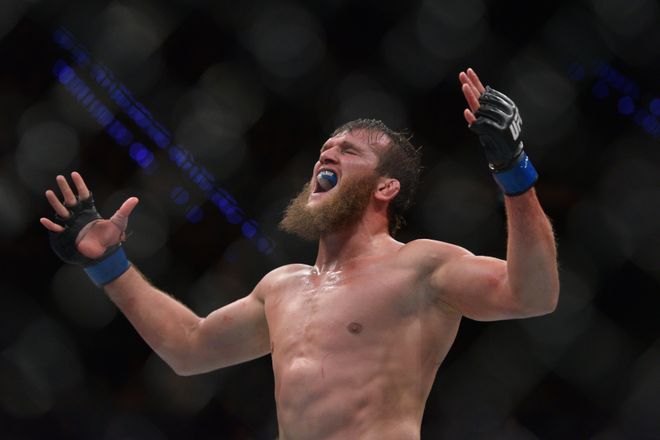 As the first-round opens, Edilov starts off with hard leg kicks, body shots as he makes Bojan back off to the fence. Edilov moves and clinchs Bojan, lands few punches as they break up and throws him to the ground. Edilov lands shots which make Bojan bleed and continues to land more strikes from the top as Bojan is trying to ward them off. As the round comes to a finish, Edilov continues with his barrage of punches while Bojan turtles up on his knees. Round 1 goes to Edilov.

In the second round, Edilov takes the center of the cage more confident. Bojan eats a knee from Edilov and gets taken down where he is being faced with an onslaught of strikes from the Chechen. Bojan is now bleeding profusely as the referee is looking for any signs to stop the fight. At 2:32 secs of the second round, the referee has seen enough and steps in to stop the fight. 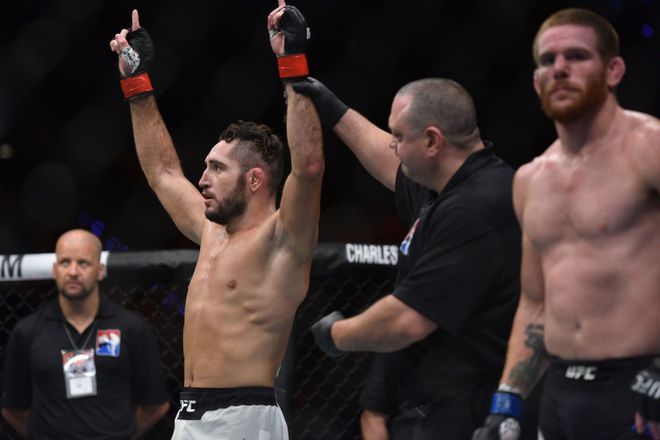 In the opening round, Andrew goes for a takedown but Gouti quickly jumps back up to avoid it. Gouti presses forward and Andrew goes in for another unsuccessful takedown. Looks like takedowns are in mind for Andrew as he tries his third one in just 60 secs of the first round. Andrew gets backed up from Gouti’s straight right. Andrew responds with a body kick, as Gouti lands his own right hands. A neatly landed right head kick drops Andrew to the ground. As he manages to get back up he eats more number of punches unable to defend them. Referee has seen enough and steps in to stop the onslaught at 4:28 secs of the first round.