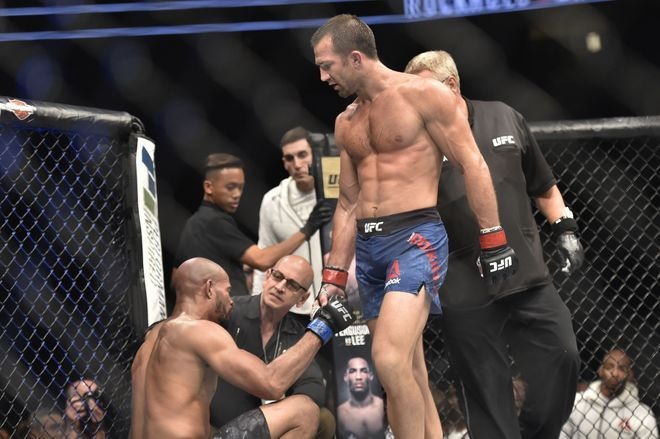 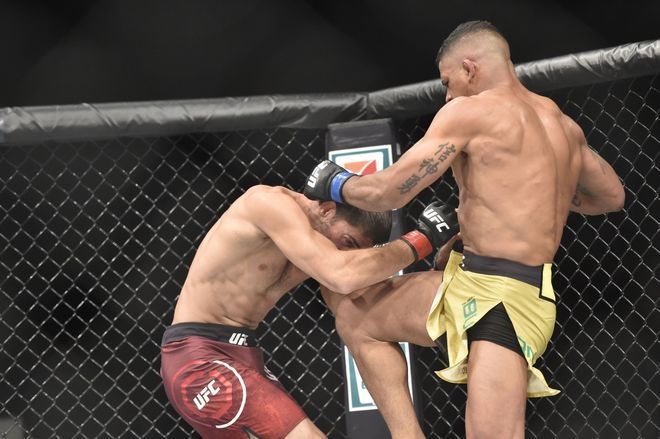 Round 1 begins and it’s Gilbert who initiates the fight with his kicks as they spend some time measuring up. Gilbert throws some heavy leather but misses. Jason comes back with a low kick but Gilbert is quick enough to check it. They both land perfectly timed hook without much damage. It’s mostly a striking game so far, but Gilbert tries for takedown and is refused as Jason defends it against the fence. Jason trips Gilbert as he moves back and lands on the floor. Jason could not capitalize the situation as Gilbert gets back on is feet only to shoot for a double leg and take Jason to the floor. Round 1 goes to Gilbert.

Round 2 begins and Jason is the one who pushes forward. Jason lands a body kick; which Gilbert responds with his own but gets taken down to the ground. Jason hesitates to go to the ground and Gilbert is back up on his feet. Gilbert lands a straight right, head kick and left hook combination that stuns Jason for a moment. Gilbert now goes for a takedown and slams Jason to the floor only to get kicked away. They both stand up and with only 5 secs left on the clock Gilbert lands a solid overhand right that lands perfectly on Jason’s jaw sending him to the floor out cold. It’s a clean KO. 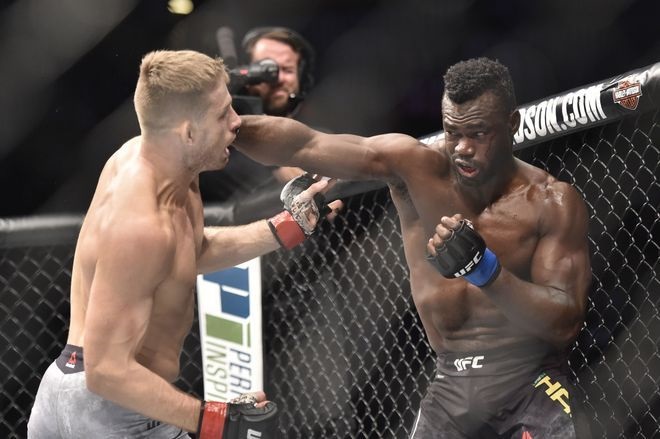 Round 1 begins and Jotko begins the round by putting pressure on Hall with his quick combinations.

Hall is being backed up and eats an uppercut in the process. They clinch only to be kicked away by Hall on Jotko’s leg. Another uppercut from Jotko, but this time has Hall hurt and covered up from the onslaught of punches. Hall is in trouble as he is taken down to the floor by Jotko who now gets in half guard position unleashing some heavy punches. Hall gives up his back as he stands up with Jotko on his back. A rear naked choke attempt from the Polish brings Hall to the ground. Hall rolls and escapes from the choke. They both are on the feet as the round ends with Hall landing a left hand. Round 1 goes to Jotko

Round 2 begins with Jotko’s uppercut finding its target. Hall comes back with his own punches and trademark spinning kicks. Hall is the one putting pressure now and moving forward. Hall lands a clean right hand and hits the canvas as Hall jumps in to land more punches looking to finish the fight. Referee steps in to stop the fight at 2:25 secs.

HEAVY KNOCKOUT FROM THE HEAVYWEIGHT 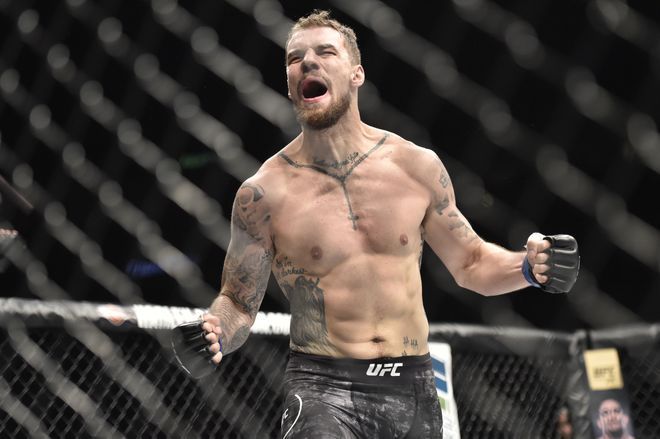 Round 1 begins with Hamilton looking to put pressure on Spitz who uses his long reach advantage to keep Hamilton away. Hamilton keeps moving forward and throws a lousy right hand to which Spitz slips and lands his own right hand on the button putting Hamilton on his knees. Hamilton is unable to cover and eats multiple right hands. Referee has seen enough and steps in to stop the fight at 24 secs.

THE NIGERIAN NIGHTMARE STRIKES IN FIRST ROUND 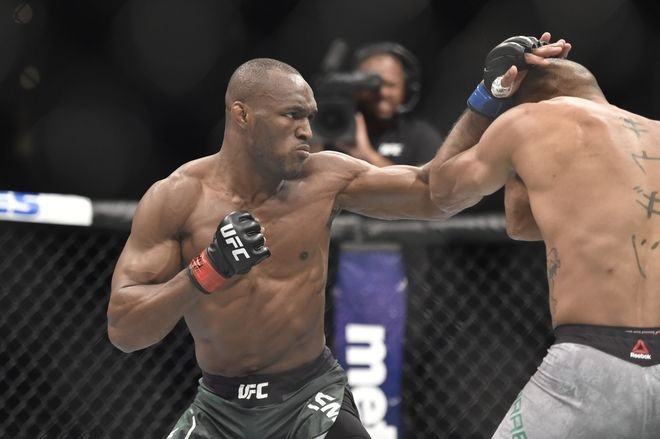 Round 1 begins with Usman landing a clean leg kick that has Moraes hurt and wobble for a moment. Moraes is on the back pedal as Usman charges ahead landing a left hook to the body and a right to the head sending Moraes to the ground. Usman wants to keep the fight on the feet. Moraes is back up but looks hesitant to engage and eats a leg kick. With his awkward stance and wide punches Moraes is unable to tag Usman and has zero effect on the Nigerian. Moraes is now being backed up to the fence as Usman lands a perfectly timed straight right to the jaw sending the Brazilian on his knees and rolling over as he is knocked out in 2:48 secs

UNDEFEATED GILLESPIE GETS SUBMISSION WIN IN A BARN BURNING FIGHT 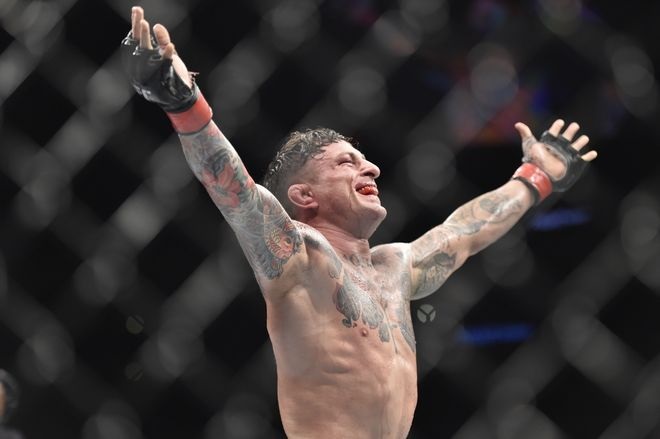 Round 1 begins and Jason instantly looks to put Gregor to his back footwork without giving him any time to react. Jason lands a head kick and a left punch, only to get a takedown attempt from Gregor. Jason denies the takedown but eats an elbow in return. Gregor is now throwing punches in bunches landing much of them on his target. Jason lands a left hook followed by a straight right. Gregor gets a takedown and gets a full mount position. It’s been a back and forth action so far between these two. Uppercut from Gregor put Jason on his knees and follows up with a double leg takedown. Gregor is now again in the full mount position and lands elbows to finish the round. Round 1 goes to Gregor.

As Round 2 opens, Jason rushes towards Gregor to land a left head kick, they both exchange hard punches and Gregor goes for a double leg takedown. This is the third time he’s on a full mount position and tries for an arm-triangle choke. The grip is slowing tightening as blood pours from Jason’s face and he has no option but to tap out at 2:11 secs. 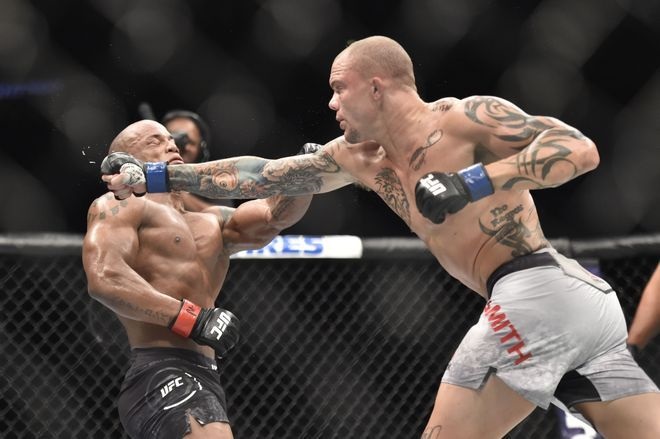 Round 1 begin and Smith throws a head kick to begin with. Being the much taller guy, his reach is making Lombard miss his shots. Lombard times an uppercut forcing Smith to land on knees. Smith is now on the ground as Lombard stand over him trying to land punches. A left body kick from Lombard and both men then begin swinging for the fences. Lombard lands kicks on Smith who backs up towards the fence. Round 1 goes to Lombard.

Round 2 and Lombard continues his way through kicks on Smith. Lombard is being more active among the two so far in the second round. He backs Smith to the fence with a near combination. Another left on the jaw from Lombard as Smith tries to move forward. More kicks from Lombard are making Smiths leg kind of give up. Decisive moments in the round and he gets a takedown. Round 2 goes to Lombard.

Final round begins as Smith comes up talking to Lombard as he kicks the shorter guy with inside leg kicks. There’s more talking from Smith than his punches or kicks. Lombard remains composed knowing he is ahead of the scorecard. Out of nowhere Smith lands a straight right on the button and Lombard hits the floor covering up. Smith unloads a barrage of punches as he knows Lombard is in trouble. Referee steps in at 2:33 secs to stop the fight. 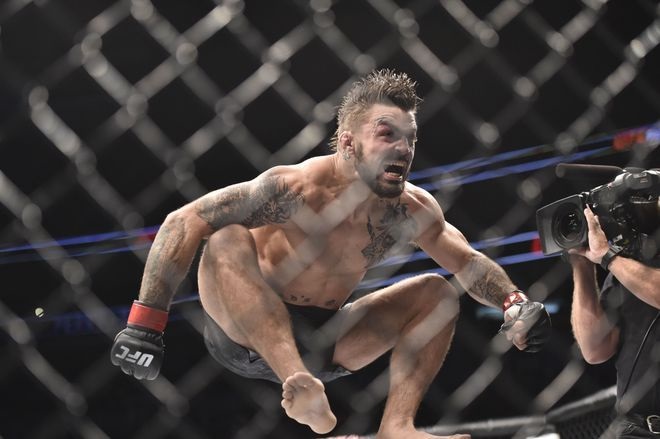 This fight is not going beyond the first round. Thanks to Perry’s KO record and history. Round 1 begins the usual Perry charging forward with overhand right punches. A right hand connects and then elbows as they clinch. Reyes stays focused and lands a knee from the clinch, but it’s the power of Perry that puts Reyes to sleep. Referee had to stop the fight at 1:19 secs. 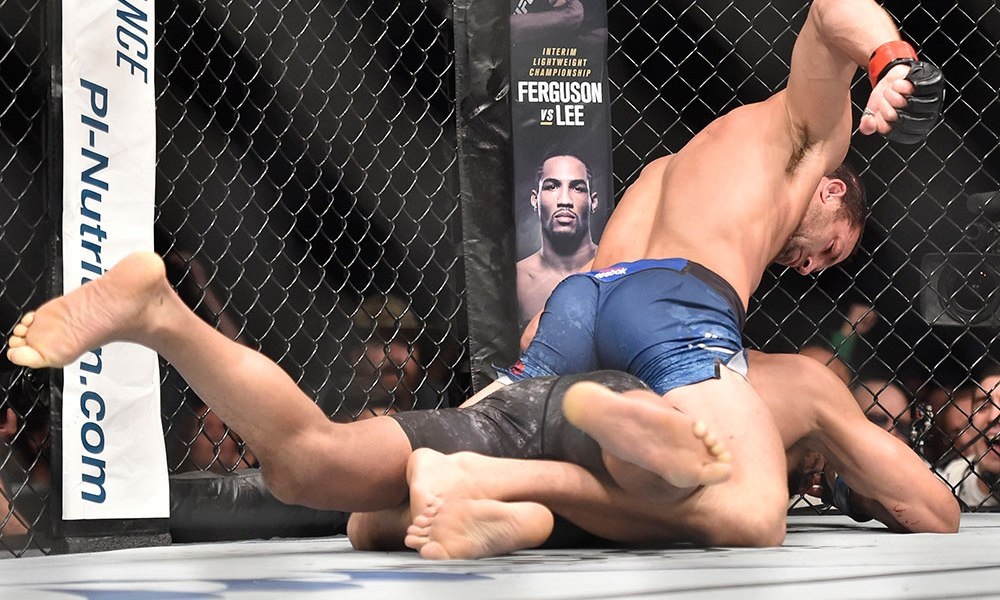 Round 1 begins with Branch initiating the momentum as he clinches Rockhold to the fence. Rockhold breakups the clinch and gets hit few hooks from Branch. Branch knows his game plan to avoid the striking and fight more from the clinch and take him to the ground. not much action in the first-round other than clinch work from both the middleweights. It appears that Branch got an eye poked from Luke. It’s the last sixty seconds of the fight and Luke goes for a take down. Round 1 goes to Branch.

Round 2 begins and Branch continues to put pressure. Kicks coming in from the AKA prodigy but Branch doesn’t want any of them and initiate the clinch. Luke looks to land that knee from the clinch. Luke wants a takedown but Branch holds him off. He is persistent and gets the takedown and is on the full mount position. Branch is in a bad position as Luke digs his body triangle and lands punches from the position. Branch is inactive and referee asks him to be active but looks like he is going to tap out any time from the strikes.

Performance of the Night Bonuses go to Mike Perry, Uriah Hall, Gregor Gillespie and Jason Gonzalez who earned $50K each.