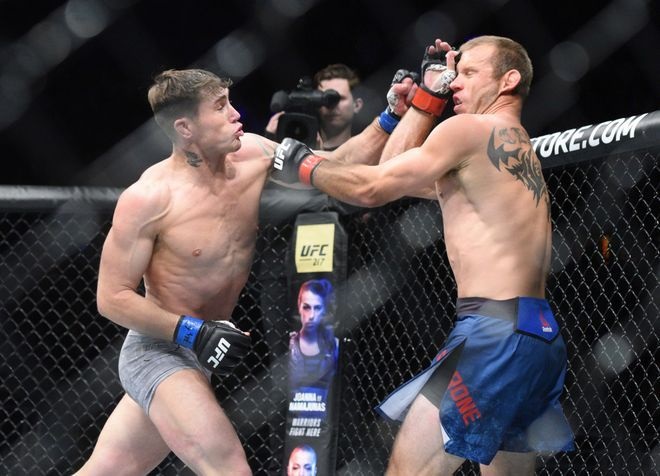 UFC Fight Night 118 in Poland drew an announced attendance of 11,138 fight fans producing a live gate of $677,000. Darren Till, Jan Blachowicz, Brian Kelleher, and Damian Stasiak each earned $50,000 bonuses for their performances tonight. Till and Blachowicz each won ‘Performance of the Night’ awards, while Kelleher vs. Stasiak was rightly awarded ‘Fight of the Night’ award.

Josh Emmett defeated Felipe Arantes via Unanimous Decision. The Brazilian Arantes was put on the mat for four times in the very first round taking away much of his confidence in the later rounds despite making quick adjustments. Josh wanted to keep the fight on the feet and avoided any ground confrontation from Arantes. It was a close fight till the end as both the featherweights looked to seal the last two rounds for themselves.

Your first knockdown of the day!

What’s Next: With this win Josh bounced back to the win bracket in his new-found featherweight division. Arantes now has two losses on his UFC record and would need a quick turn-around win to keep his job safe.

Aspen Ladd defeated Lina Lansberg via TKO in second round. Aspen Ladd initially struggled in the first round against Lina who showed her octagon experience as she pressed forward into the clinch. Listening to her corner’s advice, Aspen quickly adjusted and took Lina to the mat where most of the second round was played out. Aspen Ladd mounted her way to the top and unleashed a series of punches and elbows in a desperate attempt to finish off Ladd who was covering up without any response. Referee had to step in at 2:33 secs to stop the fight in favour of Aspen Ladd.

What’s Next: With a successful debut in the strawweight division and a perfect record of 6-0 there are numerous good fights lined up for Aspen Ladd who needs to stay active in the next year to make her name in this women’s division.

Warlley Alves defeated Salim Touahri via unanimous decision. Warlley came into the fight on a two-fight losing skid and needed a win to stay relevant in the UFC. In the first two rounds, Warlley landed more shots than Touhari and even sent him wobbling for a moment. Warlley was successful in his takedowns but could not find the submissions early on. The quick replacement Touahri could not dominate the Brazilian on the stand up and fell short in his attempt to score any big shots.

What’s Next: With a win Warlley can now be assured of his UFC run. His next fight should be re-booked with the veteran Jim Wallhead and with a win over Jim, could send him on the road to climb the welterweight division ladder.

Andre Fili defeated Artem Lobov via unanimous decision. Artem Lobov failed to live up to expectations despite having Conor McGregor to his side as he was overpowered in the stand up and on the ground by the Hawaiian Andre Fili. At a point the referee had to step in and put back Conor from being too close and involving in the fight. With his longer reach Fili kept on the pressure and landed strikes from the outside staying out of the reach. Midway during the fight, Fili proved to be overpowering as his strikes opened a cut over Artem’s eye and landed a solid head kick that had him wobbling. Fili then began his takedowns which Artem could not defend and only made him more frustrated as the fight drew to the end. The judges scored a clean 30-27 in favour of Andre Fili.

What’s Next: Hinting at a possibility of retirement, Artem Lobov could very well take this route. With a record of 2-4 inside the UFC, getting another big name would be next to impossible for him. If he manages to get wins over few lower calibre fighters, he can keep his name in the UFC’s roster.

Ramazan Emeev defeated Sam Alvey via unanimous decision. It was not a good night for smiling Sam Alvey as he first missed weight and later during the fight did not perform his usual self. The weight cut did leave him with deficient performance and judgement during the three rounds as he could not keep up with Ramazan Emeev’s pressure. There was not much action from Sam in the second round as he was too cautious to take any risk. It was late in the third round that Sam came back with his own set of strikes, but it was too late on his part.

What’s Next: Ramazan is far behind in this middleweight division and needs good tune up fights to get accustomed to the octagon pressure. With such a lacklustre performance against a slower version of Sam Alvey, the UFC new comer needs to get more experience against fighters outside the #15 line up and improve his skill set.

Brian Kelleher defeated Damian Stasiak via TKO in third round. Damian Stasiak put on a tough performance that had Brian in trouble with his punches and a spinning back kick to the body in the early round. It took another round for Brian to get back into the fight as he landed hard knees in the clinch and did some damage in the ground. Once Damian’s nose was bleeding, it was Brian all over him but could not finish off the Polish fighter. Finishing touches came in the third round with Brian’s right, left hook combination put Damian down. With just a minute left, referee had to step in to stop the constant hammering from Brian.

What’s Next: With just three fights under his belt, Brian has a long way to go in the featherweight division. After rebounding from a loss, couple of more fights will give him a solid octagon experience to face worthy opponent to break in the #15 rankings.

Marcin Held defeated Nasrat Haqparast via unanimous decision. Marcin Held’s run in the UFC did not live up to his hype and this was a do-or-die fight for him after three consecutive losses. Newcomer Nasrat gave a tough standing to the Bellator veteran and even knocked him down in the second round with his better timing and distance control. Nasrat gave a close fight in the first two rounds, but in the third Marcin shined with his take downs and submission attempts. It was a clean victory in the judge’s eyes as Held took him his first octagon win.

What’s Next: With a win over a relatively unknown and new comer Marcin Held might get his confidence back but it’ll do any good to him in terms of the rankings. He still must prove himself in the lightweight division and defeat some higher ranked fighters to keep his spot in the UFC.

Oskar Piechota defeated Jonathan Wilson via Unanimous Decision. In all the three rounds, Oskar came close to finishing Wilson but was denied every time as the bell rang. In the first round, with Oskar got the standing body triangle for a good portion of time and took Wilson down to submit via a rear naked choke. In the second a heavy overhand right saw Wilson drop to the canvas in closing seconds. Wilson managed to get back up and entered the third with a sense of urgency but could not implement his game plan as Oskar looked for an armbar to triangle choke as the final round came to close.

What’s Next: With a successful UFC debut and improving his record to a perfect 10-0 Oskar needs couple of more tune up fights where he can show his improved cardio and striking. Wilson who has now lost three straight fights, is in a bad spot and may or may not get another chance to get back to the win column.

Wow!! @JanBlachowicz using that Polish Power to submit Devin Clark on his feet at #UFCGdansk!! pic.twitter.com/wtLYc94qLQ

What’s Next: Jan’s performance in the UFC has not been noteworthy with a record of 3-4. But with this win he snapped his two-fight losing skid and proved he still can be a good draw in the European market. He is yet to prove himself against the top talent of the light weight division and a with a win against a big name in his next fight can slowly climb up the ladder.

Karolina Kowalkiewicz defeated Jodie Esquibel via unanimous decision. Being a much taller fighter, Karolina used her height and reach advantage all through the fight keeping Jodie at bay with her counter strikes. Jodie kept coming forward with her leg kicks but fell short and got caught by Karolina, who kept finding her range in the first round. In the second round, Karolina was again the busier fighter with her knees and punches being the more accurate strikes. A battered Jodie entered the third with the same intensity, but Karolina’s good defence kept her from taking any advantage.

What’s Next: A title contention fight with Jessica Andrade could be next for Karolina. With both the strawweight’s having fallen short in their previous title contentions this fight could be the deciding factor for this divisions next title contender.

Darren Till defeated Donald Cerrone via TKO in the first round. Darren Till’s name will now be remembered as the unknown welterweight who stopped the veteran Cerrone with his slick punches in just 4:20 secs. Right from the start Cerrone was on the back foot and landing just a few low leg kicks. Cowboy somehow looked totally unprepared for the fight or that he took Till too lightly. The left straights did the damage as Till landed them at will and Cerrone was stunned with a solid elbow followed by a barrage of punches that put him to the canvas covered up.

What’s Next: Shortly after the win Darren Till called out Mike Perry who was at the cage side. Both these fighters with their fighting styles would make a solid and entertaining fight for the fans.

Previous article3rd AIMMAA National Amateur Championship 2017 results – A peek behind the curtains of the country’s future
Next articleWill Arjan Bhullar be allowed to don the turban by the UFC ?