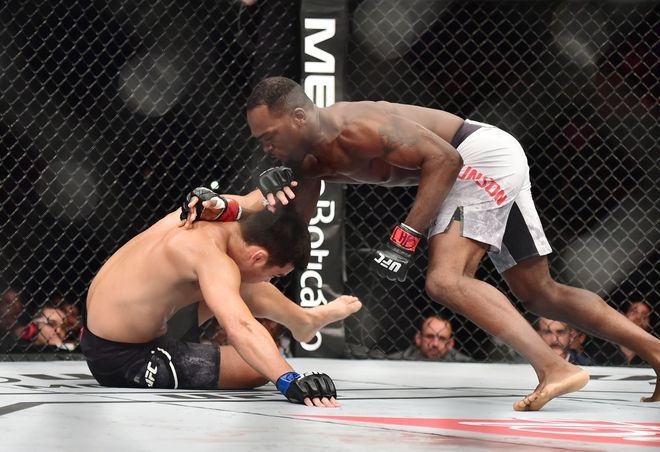 Marcelo Golm defeated Christian Colombo via rear naked choke submission in the first round. Heavyweight Golm was too much for Colombo who could not keep up with the early pressure. Golm overwhelmed Colombo with an early combination of a straight right and a left hook backing him up to the fence. Golm then tripped Colombo to the ground gaining a full mount position and proceeding to take the back where he went in for the rear naked choke at 2:08 secs of the first round. Colo

First round finish in your UFC debut? ✅@MarceloGolm gets the first round sub on home soil 🇧🇷 #UFCSP pic.twitter.com/u8r33P0MLy

What’s Next: Golm made an impressive debut and improves to a 5-0 record. He has a long way to go in the heavyweight division and should be looking to fight fighters outside the top 15 to get more experience inside the octagon. The 39-year-old Colombo retired tonight as he did not get a win in his three UFC appearances.

Deiveson Figueiredo defeated Jarred Brooks via split decision. Despite having a tough time making weight, lightweight Deiveson managed to grab win against the relentless Jarred Brooks after a three-round slow placed action. Brooks relied completely on his wrestling as he went for one takedown after another and slammed Deiveson putting him on his back in the opening round. From the second round, Deiveson was quick enough to defend them with guillotine choke attempts and responded back with his heavy punches. A big suplex from Brooks was the highlight of the third round as he attempted for a kimura.

What’s Next: Deiveson gets second win in the UFC and stays undefeated with a perfect 13-0 record. But in this lightweight division there are better fighters ranked above Deiveson who can break his clean record. A few more wins and Deiveson could be ready for breaking in the top 15 spot.

Elizeu Zaleski dos Santos defeated Max Griffin via unanimous decision. In the first round, Santos was seconds way from putting away Max as he stunned him a big knee and an overhand right. Max came back strong and had his own moment in the second as he put Santos in danger zone. All through the three rounds, both the welterweights went back and forth proving their toughness in front of the electrifying crowd. Santos landed a series of punches in the third round as he controlled the momentum of the fight in the final round winning in the judges’ scorecards.

OHHH @ElizeuCapoeira ROCKS Griffin, but he survives to the end of the round! How did Griffin survive that?! #UFCSP pic.twitter.com/MJ8vakTEXK

What’s Next: With a solid performance tonight, Santos gains some respect in the welterweight division. With a 18-5 record he should be looking to fight some big-name fighters next year. For Max things looks dicey as he goes 1-2 in the UFC and his next fight could be the final one based on his performance.

Jared Gordon defeated Hacran Dias via unanimous decision. Jared put on an excellent performance despite getting out struck and cut in the fast paced first round. In the second round, Jared changed the approach and went for a takedown. He then pushed the pace for the entire round as Dias could not keep up with the pace. Dias started to gas out in the second which was clearly visible in the third round as he came out tired and bruised.

Antonio Carlos Jr. defeated Jack Marshman via rear naked choke submission in first round. Antonio was in complete control of the fight right from the start till the end as he excelled both in striking, and ground game. Antonio tripped Jack after landing some shots and gained a full mount position from where he landed a barrage of punches. Jack gave up his back unable to defend the punches and fell victim to the choke with 30 secs left in the round.

What’s Next: With four straight wins and fighting for three years in the UFC, Antonio now needs some big names to climb up the middleweight ladder.

Vicente Luque defeated Niko Price via submission in the second round. Fighting on a short notice, Vincente made the most of this fight as he landed leg kicks and punches early in the first round to heat things up. It was in the second round, that Vincente landed a beautiful combination that dropped Niko on the ground. Seeing an opportunity to submit Niko rather than finish him with strikes, Vincente pulled out a D’Arce choke to tap out Niko at 4:08 seconds.

What’s Next: Vincente bounces back after his last loss and improves to a 5-2 record in the UFC. It’s time for him to get more serious fights to build up the credibility and continue his run in the UFC.

John Lineker defeated Marlon Vera via unanimous decision. The bantamweight with hands of stone, controlled most of the fight with his forward movement. Vera had a height and reach advantage but that didn’t get him to keep away the shorter Lineker as he moved in to close the distance and land his trademark power shots. Vera was more successful only with his kicks but could not do severe damage or slow down the pace of Lineker.

Big GnP from @JohnLineker to end round 2!

What’s Next: With this win, Lineker improves to a 11-3 record in the UFC after his recent loss to Dillashaw. With another couple of more wins, Lineker should be in line for the next title contention.

Thiago Santos defeated Jack Hermansson via TKO in the first round. Both the fighters begin the round pacing, measuring each other up and waiting to unload. Santos initiated the first onslaught that made Jack cover up for every strike that Santos threw. A series of punches found their mark as Jack moved back covering up. A solid uppercut left him dazed and floor to the ground covering upa s as Santos continued to unload until the referee had to step in at 4:59 secs.

What’s Next: Santos is now on a three-fight win streak winning all three via TKO’s. He has somehow unable to perform when it comes to higher ranked fighters.

Francisco Trinaldo defeated Jim Miller via unanimous decision. The veteran Jim Miller was outworked completely by the 39-year-old Trinaldo. In the opening round, Miller looked his usual self but Trinaldo’s pace and aggression wore him out as the rounds progressed. In the second round, Trinaldo’s strikes landed frequently and as the fight went to the ground there was little that Miller could do to put away the Brazilian. By the end of the third round, Trinaldo was way ahead in the scorecard. Though he could not finish the experienced Miller, he did enough to earn the win in his favour.

What’s Next: With this win Trinaldo has proved that he can hang in there with the experienced and top ranked fighters, but time is running out for this 39-year-old if he still wants to fight for that title belt. Miller now has three straight losses and it doesn’t send good signals

Pedro Munhoz defeated Rob Font via submission in the first round. It just took Pedro 4:03 secs to hand Rob his first submission loss as he put his game plan to action. Both Pedro and Rob traded heavy punches and leg kicks in the opening moments of the round. The fight got wilder as Pedro began swinging for the fences with wide hooks landing on the side of Rob’s head. A left hook caught Rob on this chin and he attempted for a takedown and gave up his neck. Pedro wrapped his hands around Rob’s neck to set up a guillotine choke making him tap instantly.

WHAT A MOVE! Pedro Munhoz gets the submission win with a guillotine from the top position! #UFCSP https://t.co/TdV3BV7Xz6

What’s Next: Pedro needs to stay more active next year if he wants to get more attention in the bantamweight division. He has the right combination of skills and with a bit more octagon experience can bring in top 10 fighter to compete with.

Colby Covington defeated Demian Maia via unanimous decision. This welterweight fight between a BJJ expert and an ace wrestler turned out to be a striking match as Demian Maia surprised everyone with his improved striking. Maia began landing punches at will and cut open Colby on his left eye leaving him bleeding throughout the fight. But Maia’s game plan of striking turned against him as he began to slow down from the second round. Maia’s takedowns were stuffed and well defended by Colby who overwhelmed him in the last two rounds. By the end of the third round, Maia was completely drained off and battered from the constant pressure and striking of Colby who appeared to have been enjoying the whole fight.

What’s Next: Maia now has two straight losses, which could see him slip down the top 5 rankings. Colby wins his fifth straight fight, but his spectacular performance tonight might still not earn him the title. If he manages to win his next against a top 3 fighter, he might end up fighting for the title by the end of next year.

Derek Brunson defeated Lyoto Machida via KO in the first round. Machida looked his usual elusive as the round began while Brunson was more cautious with his attacks. Brunson kept on closing the distance as Machida evaded his strikes. But half way through the fight Brunson’s pressure was too much for Machida who was coming with a counter strike but instead got clipped by Brunson’s own counter left. Machida hits the ground and Brunson unloads some heavy punches until the referee had to step in at 2:30 secs.