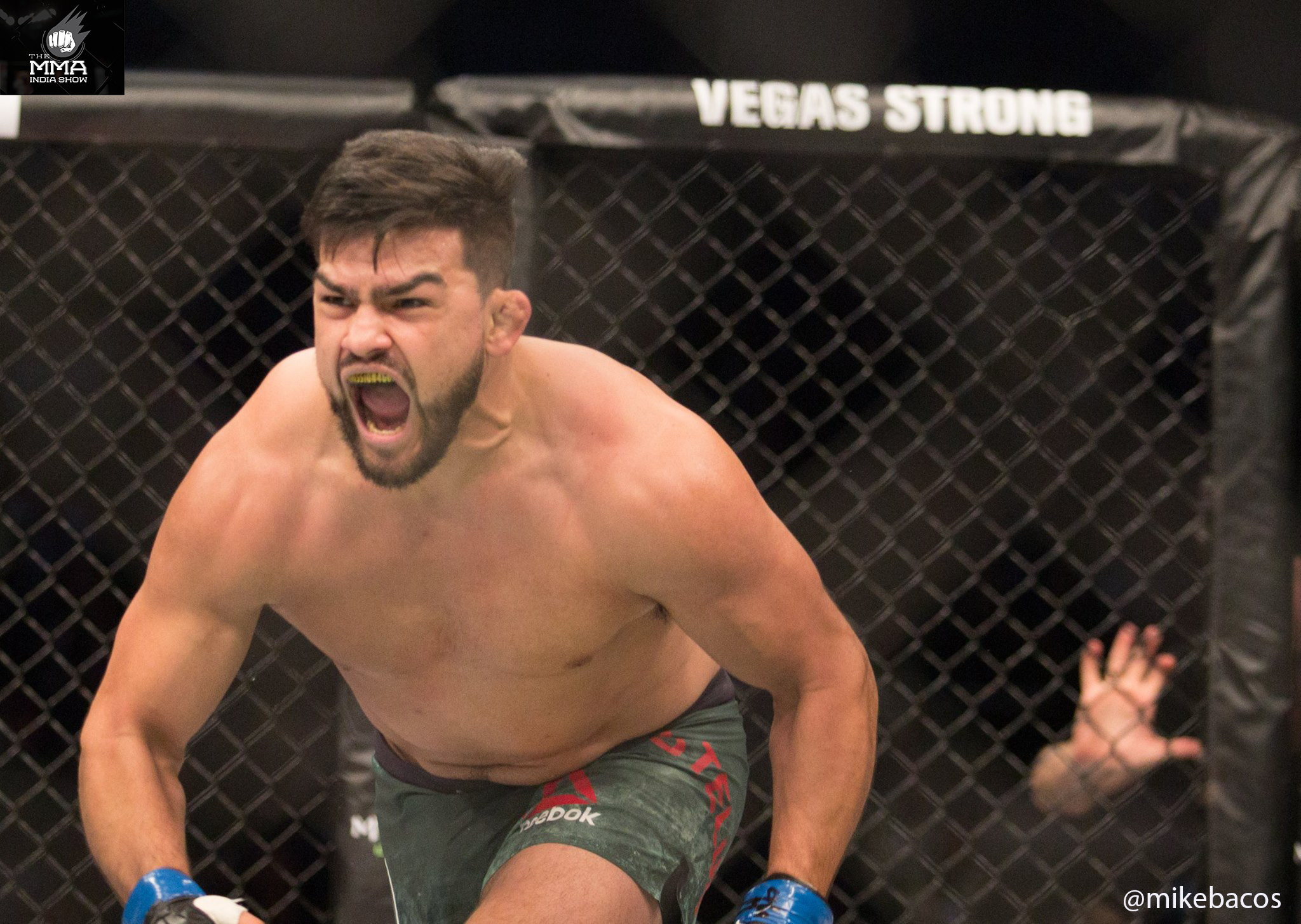 UFC returned to Asia after their highly successful Fight Night earlier this year in Singapore, as they finally made in – roads into the much coveted Chinese market. The card was stacked with local talent, but the one fight on the prelims card that intrigued the South Asian fans pitted two Jackson – Wink alumni, as the Indian standout, Bharat Khandare made his UFC debut against Yadong.

The main event pitted two of the top middleweights against each other, as the former UFC Middleweight Champion, Michael Bisping returned to action just three weeks after losing the title to Georges St – Pierre. Kelvin Gastelum was originally scheduled to face Anderson Silva, but with Silva getting popped for nandrolone, Bisping stepped in to main event his second fight in a three week span.

Kelvin Gastelum defeated Michael Bisping by KO in 2:30 of round 1 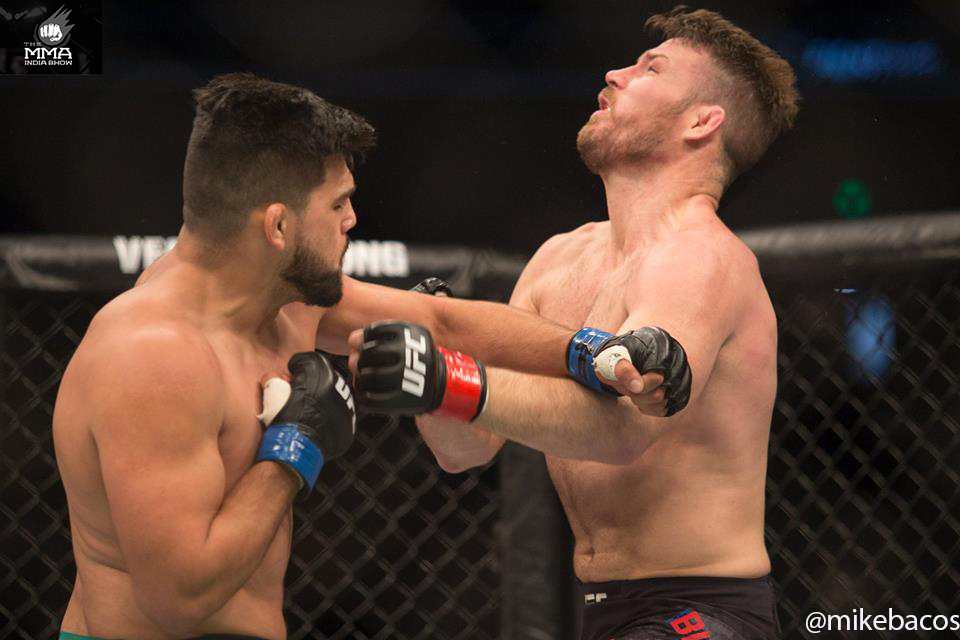 The main event of the night saw Kelvin Gastelum continue his quest for the elusive championship gold, while the former champion, Michael Bisping showed signs of regression. After losing to GSP less than a month ago, the Manchester native stepped in to fill the void left by Anderson Silva’s suspension.

Gastelum is known for his aggressive pace, and wearing down opponents in the clinches, as witnessed during his fight with Tim Kennedy. Gastelum connected with a body kick within the first minute, which was followed by Bisping answering with an overhand right. As initially thought, Gastelum initiated a clinch, but Michael quickly created the separation he needed.

However, the fight didn’t last long, with Kelvin closing the distance and landing a swift left, sending Bisping crashing onto the canvas. Kelvin rained down with a barrage of punches, but Bisping was knocked out cold by that point, as Marc Goddard stepped in to stop the fight!

In his post fight interview, Kelvin called out Robert Whittaker, and proposed a showdown between the two in Perth next year. Bisping is just one fight away from retirement, and would want to fight on the London card in March.

Li Jingliang defeated Zak Ottow by TKO in 2:57 of round 1 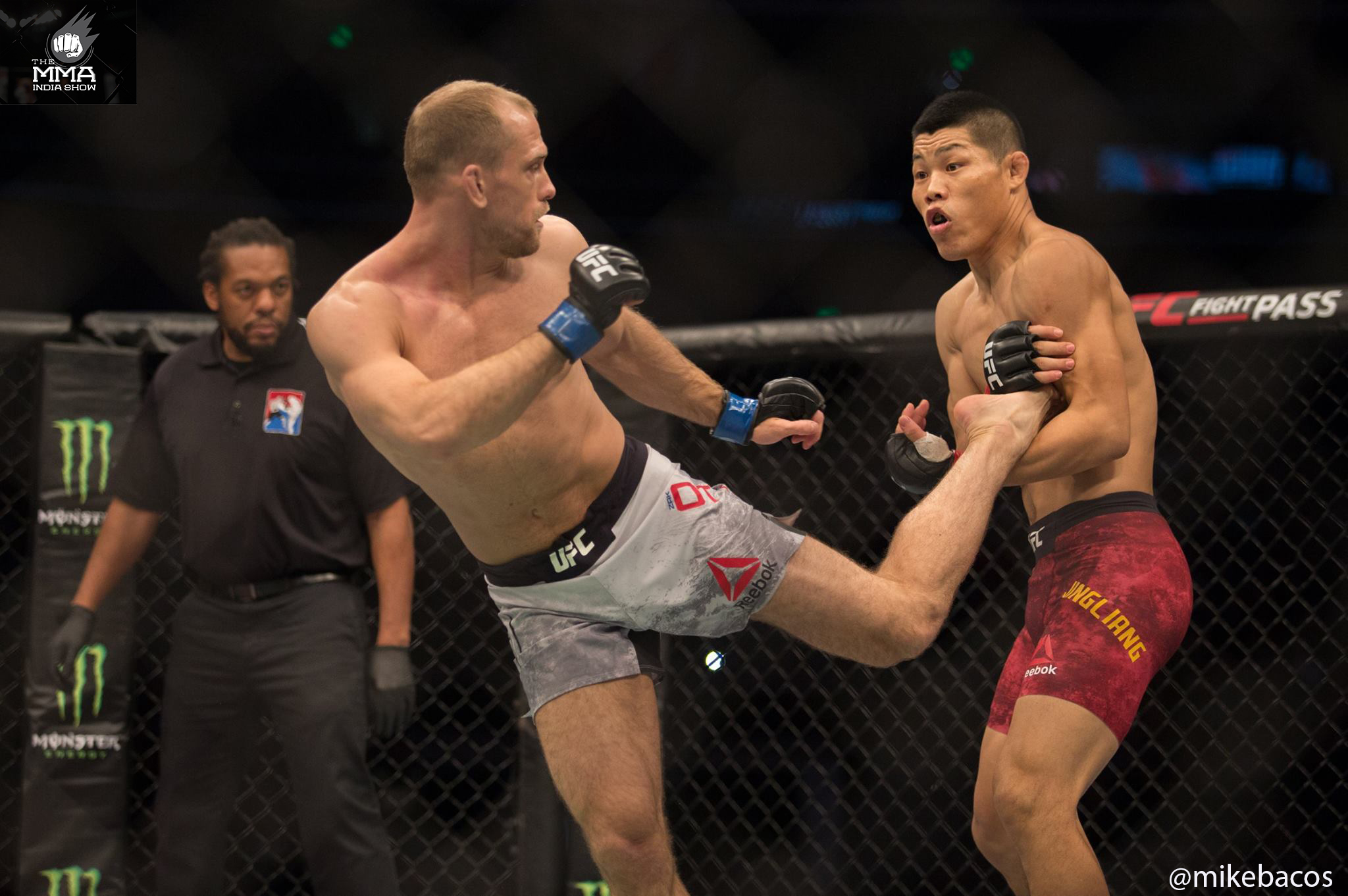 The Chinese standout, who transitioned to mixed martial arts from Sanda showed great improvement in his striking game, as he connected with a straight right in the first round to send Ottow to the floor.

The co – main event of the night lived up to its billing, as Jingliang proved that he is a name to be reckoned with in the welterweight division. While Ottow tried to maintain his distance, Jingliang was efficient in his output, and succeeded in maintaining constant pressure on his opponent. It did not take long for Jingliang to exert his dominance, and he rained down with punches and hammerfists, as the referee stepped in to stop the fight. 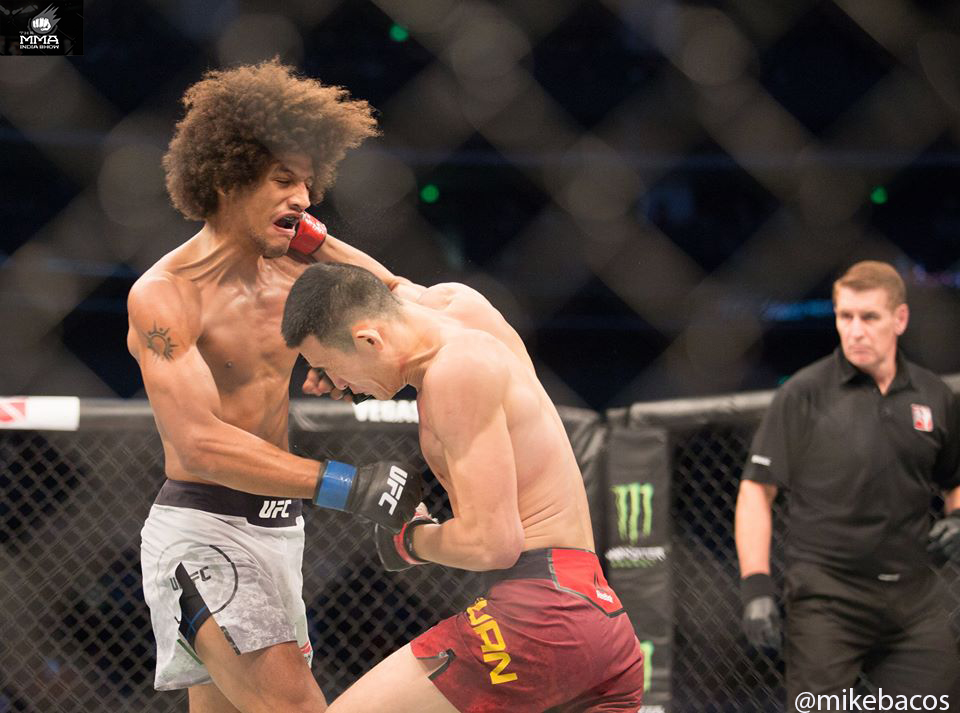 Wang Guan was originally slated to face Alex Caceres in Singapore few months ago, but Guan was forced off the card, leading to Rolando Dy stepping in. However, the fight was rebooked, and both the explosive strikers met in Mainland China earlier in the evening.

Caceres is known for his quick movement, and his unorthodox striking, while Wang Guan is known for his explosive power and the pace he maintains throughout the fight. Both the fighters had similar ideas early in the first round, landing knees below the belt. However, the second round proved to be pivotal, with Guan finding his range, and landing some excellent combinations. Guan nearly finished the fight in the second round, dropping Caceres with a short left hand, and tried to finish his opponent with ground – and – pound.

However, the buzzer went off, giving Caceres one more round to get back into the fight. While Caceres upped the anti in the third round, it was too little, too late for “Bruce Lee Roy”, as Wang Guan ran away with the split decision victory.

Alex Garcia defeated Muslim Salikhov by submission (RNC) in 3:22 of round 2 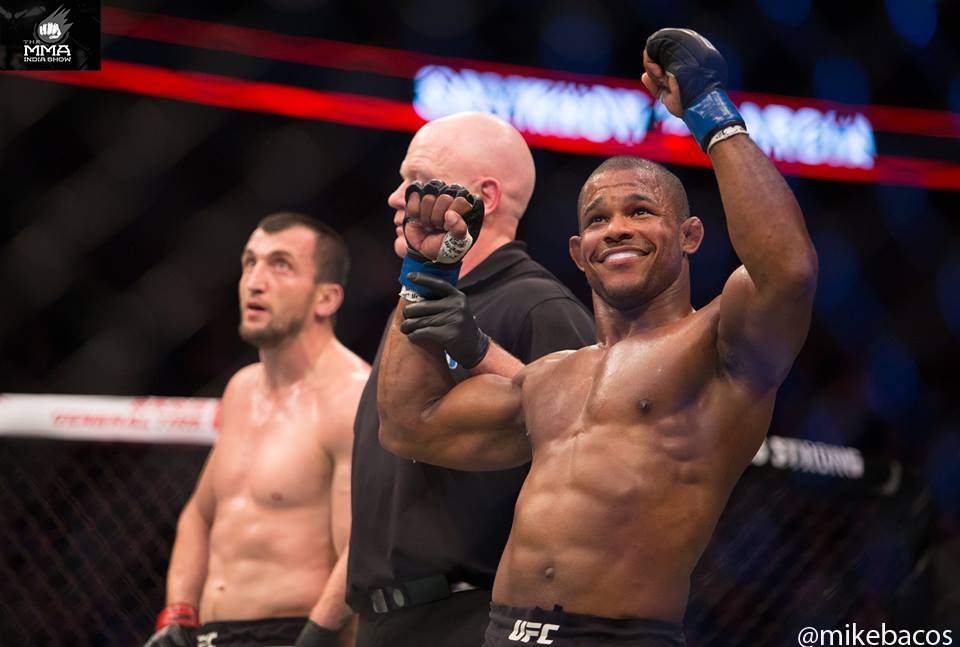 The first fight on the main card was a welterweight bout between Garcia and Salikhov. It was Salikhov’s striking against Garcia’s jujitsu, with Salikhov dominating the fight in the early going, connecting with good body kicks, and exploding with excellent combinations.

However, Garcia weathered the storm, and showcased his grappling prowess. The end came in the second round, as Garcia succeeded in mounting the pressure from the top position, forcing Salikhov to give up his back. Garcia then sunk in the hooks, and finished his opponent with the rear naked choke.

Zabit Magomedsharipov defeated Sheymon Moraes by submission (Anaconda choke) in 4:30 of round 3

The featured fight on the prelims card inside the Mercedes – Benz Arena had two featherweights plying their trade, as Zabit Magomedsharipov faced former WSOF title challenger, Sheymon Moraes. Moraes was making his UFC debut, and came in with a good reputation, and a 9 – 1 record.

However, it was Zabit that impressed the fans and the head honchos, as he registered his 10th consecutive win — a record that dates back to April 2013! Magomedsharipov maintained constant pressure, as Moraes found himself trapped on his back for majority of the fight. Zabit managed to finish the fight with just 30 seconds remaining on the clock, defeating Sheymon with the Anaconda choke.

Song Kenan defeated Bobby Nash by TKO in 0:15 of round 1

Song was making his UFC debut, while Nash was coming off back – to – back losses in the UFC. The debutant did not take long to finish the fight, sending Nash crumbling to the mat with a devastating right hand, followed by punches as the referee stepped in.

This earned Song one of the fastest finishes in UFC history, while Nash finds himself 0 – 3 in the promotion. While Nash could be given his marching orders, it was the perfect start for Kenan, who couldn’t contain his happiness after the fight. 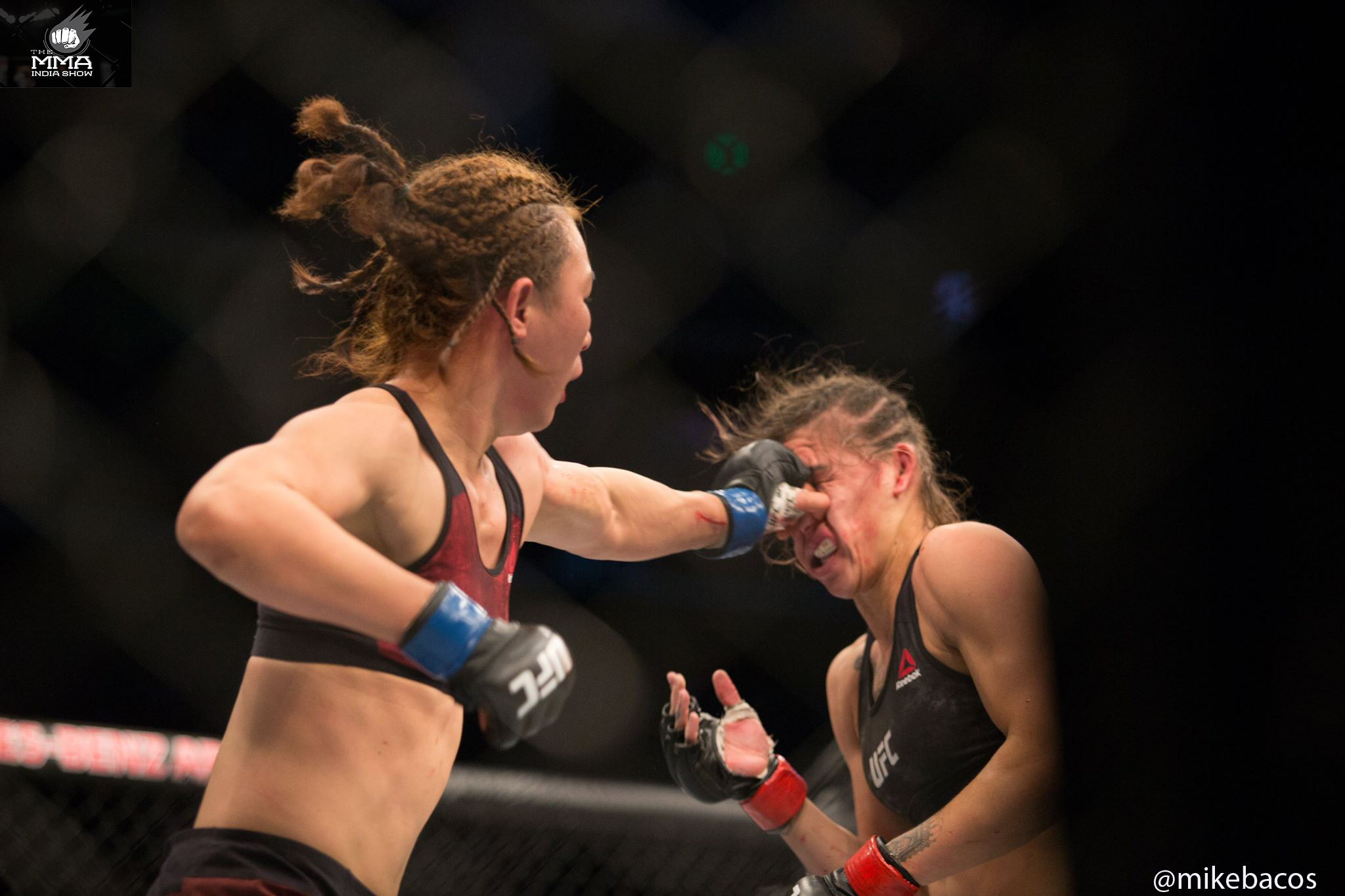 Kailin Curran needed to secure a victory going into the fight, with her UFC record being an unflattering 1 – 5 so far. However, she was up against a solid striker in Xiaonan, as the straw weights put on an excellent showing.

Xianon used her striking pedigree to chop Kailin down, while Curran was unsuccessful in her takedown attempts. Curran couldn’t subdue her opponent with her clinch work either, as Yan ran away with a unanimous decision victory.

Song Yadong defeated Bharat Kandare by submission (Gogo choke) in 4:16 of round 1 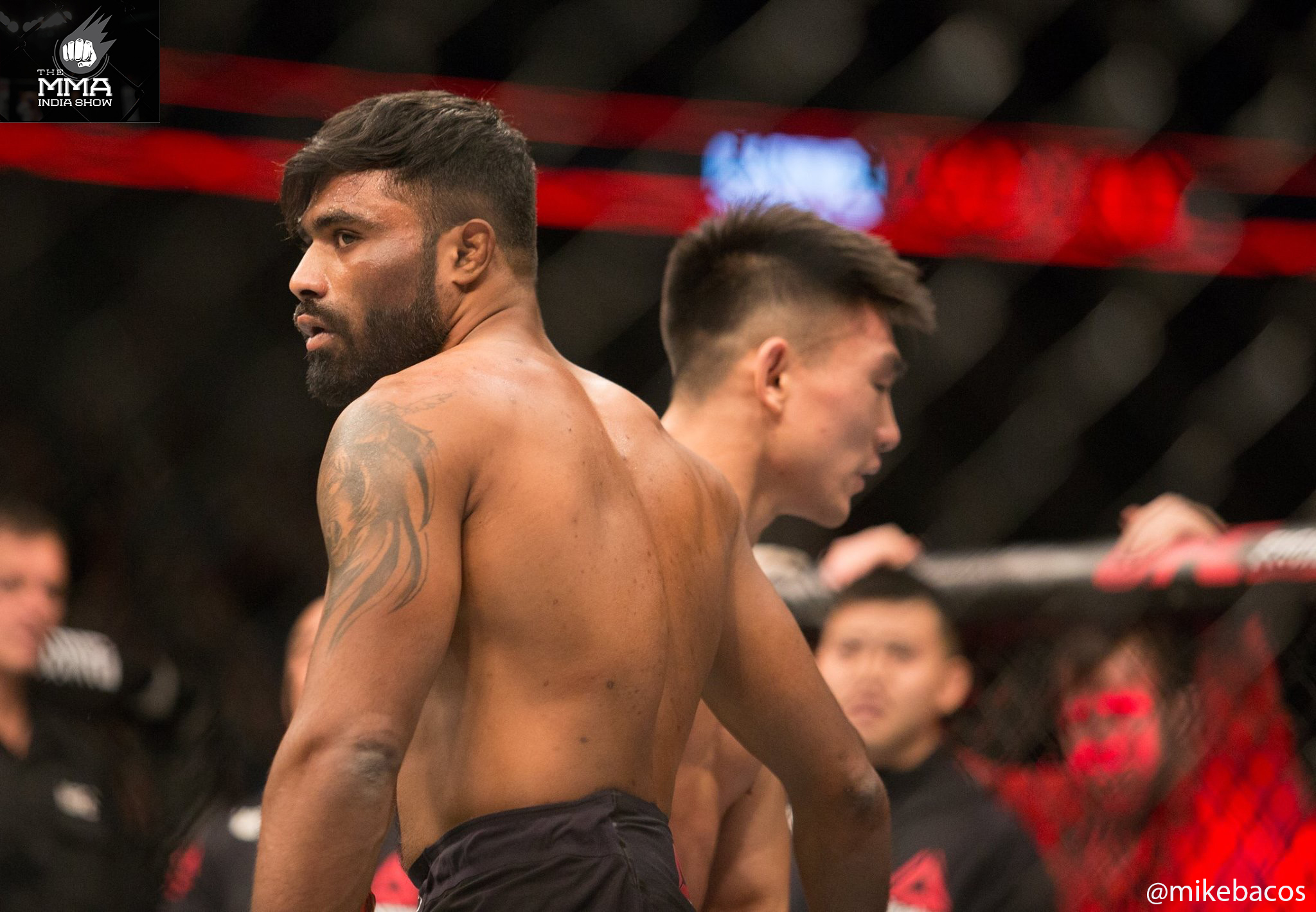 One of the highly anticipated bouts on the preliminary card was between Song Yadong and Bharat Kandare. Bharat became the first Indian born fighter to sign up with the UFC, and as such, carried the hopes of over a billion people.

With the fight booked in just under two weeks, the natural bantamweights fought at 145 lbs. Song immediately showcased excellent head movement, as Bharat tried to rely heavily on his overhand rights. Yadong had his opponent well scouted, changing levels and tagging him with crisp counters. Song moved forward and hurt Bharat with his explosive right hand.

Song swarmed in and locked in a 10 finger choke, as Kandare tried to propel himself forward using the cage. However, he was unsuccessful in his attempt to scramble, and had to tap out in the first round.

Shamil Abdurakhimov defeated Chase Sherman by KO in 1:24 of round 1 The heavyweights took centre stage, as “Vanilla Gorilla” faced off against Shamil. Known for his explosive power, Abdurakhimov immediately ran Chase down, and started landing some clean shots.

Chase was staggered by Shamil’s left hook, as Shamil connected with an overhand right, and yet another left hook, as Chase fell to his knees. The referee stepped in to call the fight off in just under 90 seconds of the first round! 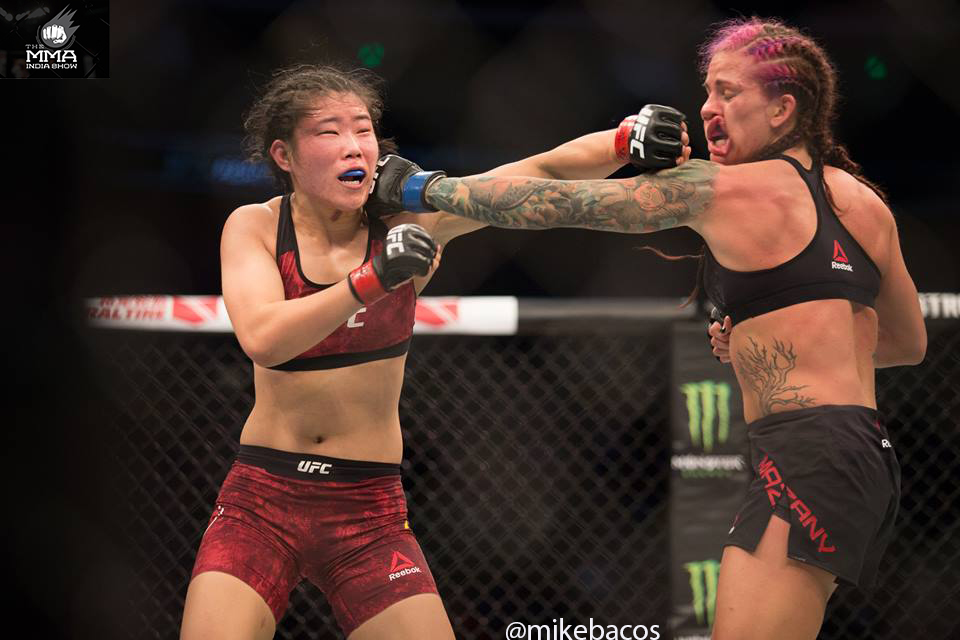 Mazany got her first win in the UFC (1 – 1) with a unanimous decision victory over Wu Yanan. The local fighter was overwhelmed in all areas, as Gina showed excellent top control on the ground, and was dominant in the striking exchanges. However, she was unsuccessful in putting her opponent away, as Yanan managed to hang on for all the three rounds.

Wu tried to rally in the final round, and tried to secure a submission victory. However, Gina thwarted her advances, and kept chipping away with excellent combinations. By the end of the third round, there was little doubt as to who won the fight, with Mazany picking up a unanimous decision victory. 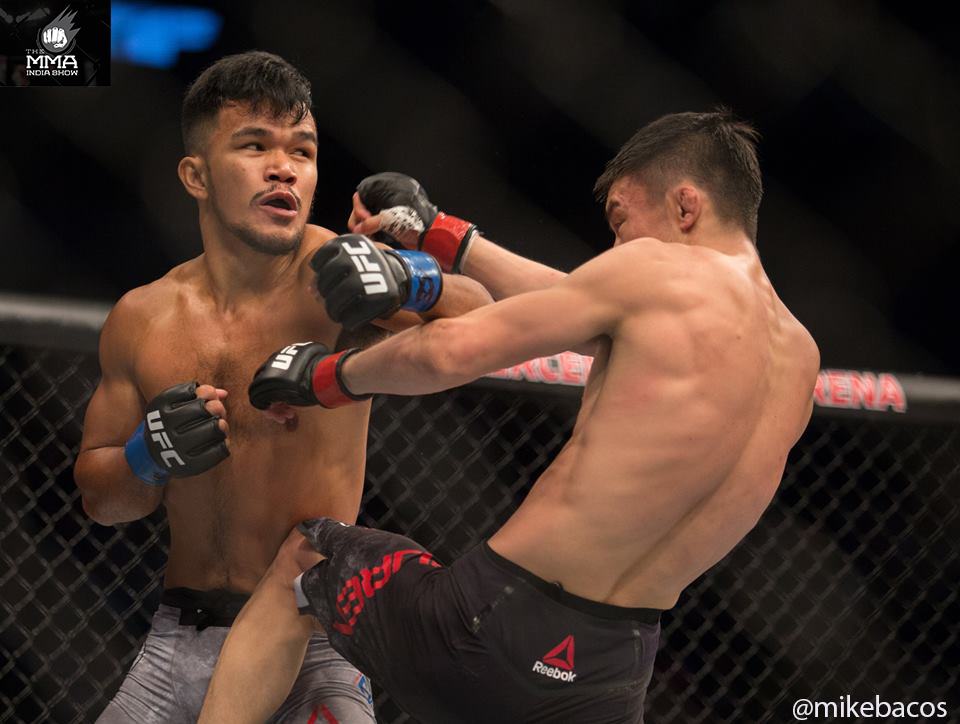 Rolando was unlucky in his first two fights, fighting top opponents. Dy was a last minute replacement in Singapore against Caceres, while he could not get the job done in Japan. With a 0 – 2 record in the UFC, Rolando had to get the job done inside the Mercedes Benz Arena to keep his hopes alive in the UFC.

Dy faced Wuliji Buren, and relied heavily on his striking game, while Buren showed impressive grappling skills. Buren’s top control was on point, but Dy had good moments on either ends of the fight, resulting in the judges being swayed to give him the unanimous decision victory.

Rolando had earlier missed weight for the featherweight bout, and will relinquish 20% of the fight purse to his opponent.

Cyril Asker defeated Hu Yaozong by submission (RNC) in 2:33 of round 2 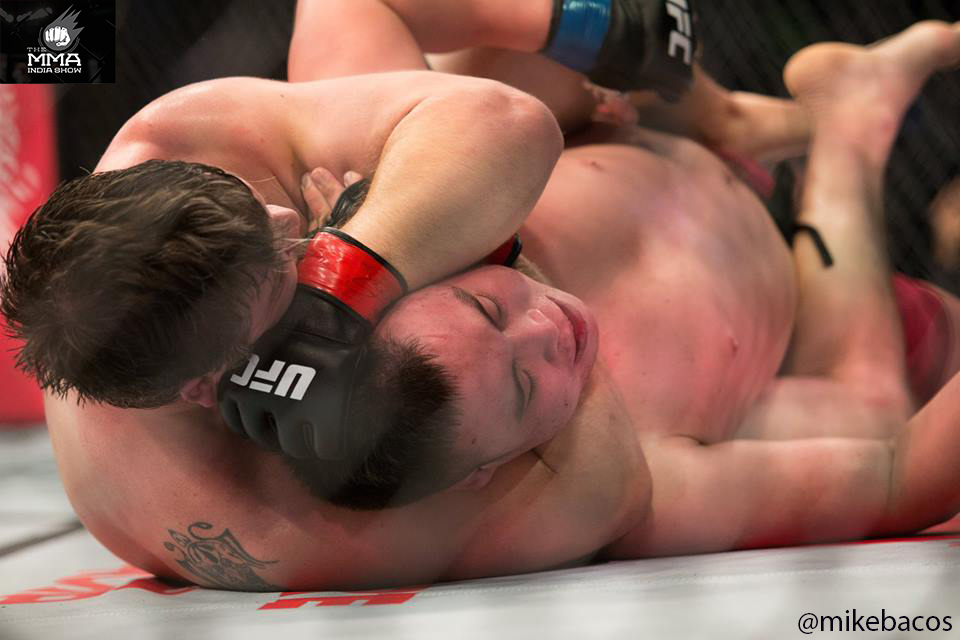 The first fight of the evening witnessed the heavyweights in action, as Cyril Asker faced Hu Yaozong. Cyril had no problems in exerting his game plan on the fight, as he using his grappling chops to subdue the Chinese fighter. Asker nearly synched in the guillotine choke in the first round, but finished his handiwork in the second round.

Asker managed to get Yaozong’s back, and bludgeoned him until he could sink in his hooks for the rear naked choke. Cyril finished the his opponent at the 2:33 mark of the second round, taking his UFC record to 2 wins and 2 losses.