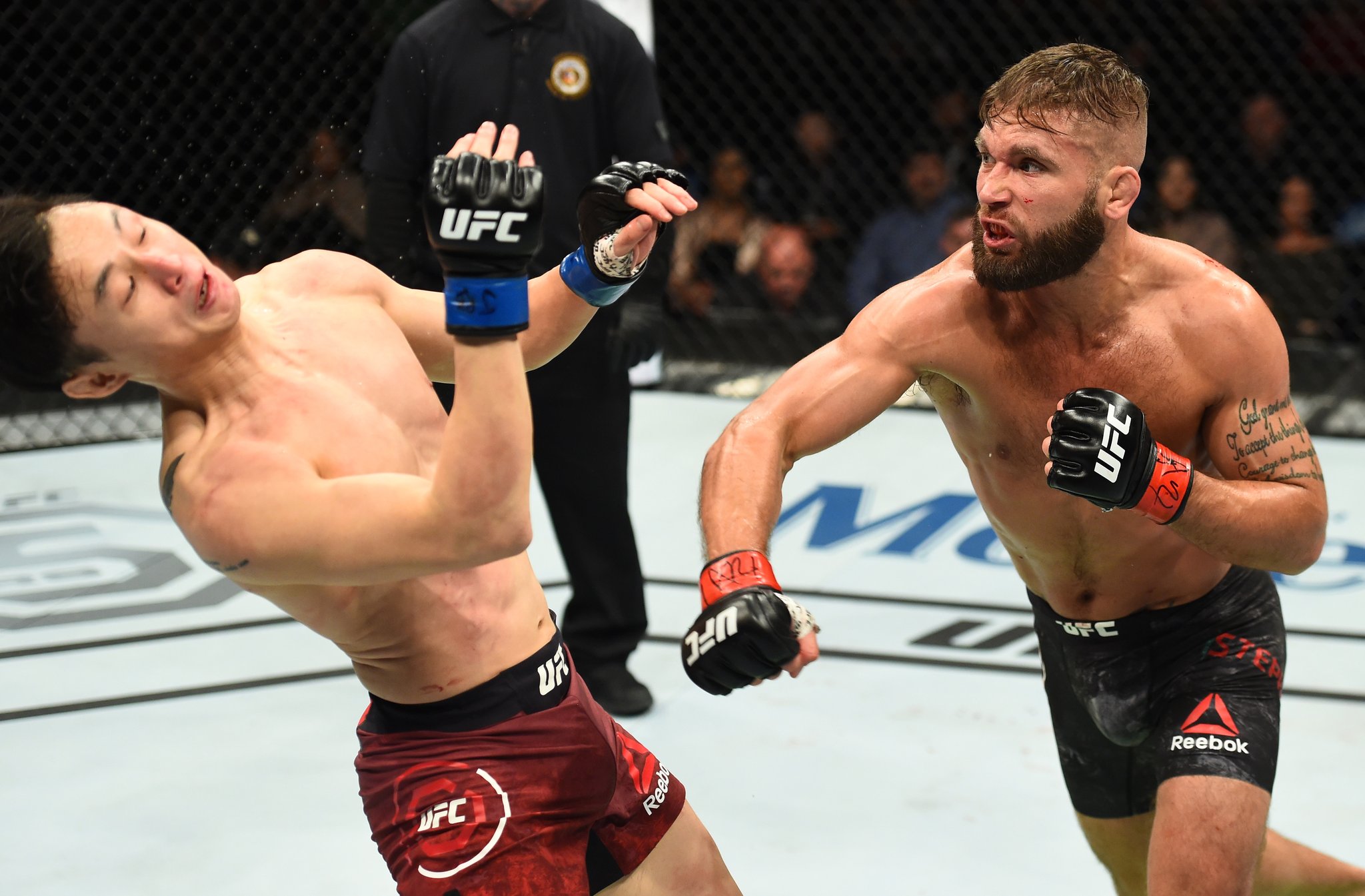 UFC has put on a stacked card, as Doo Ho Choi faces Jeremy Stephens in the main event of UFC Fight Night 124 in St. Louis. In the co – main event, Paige VanZant makes her flyweight debut, against Jessica Rose-Clark. Top welterweight contenders cross paths as well, with Kamaru Usman facing Emil Meek, with a fight against a top 5 welterweight in the offing. 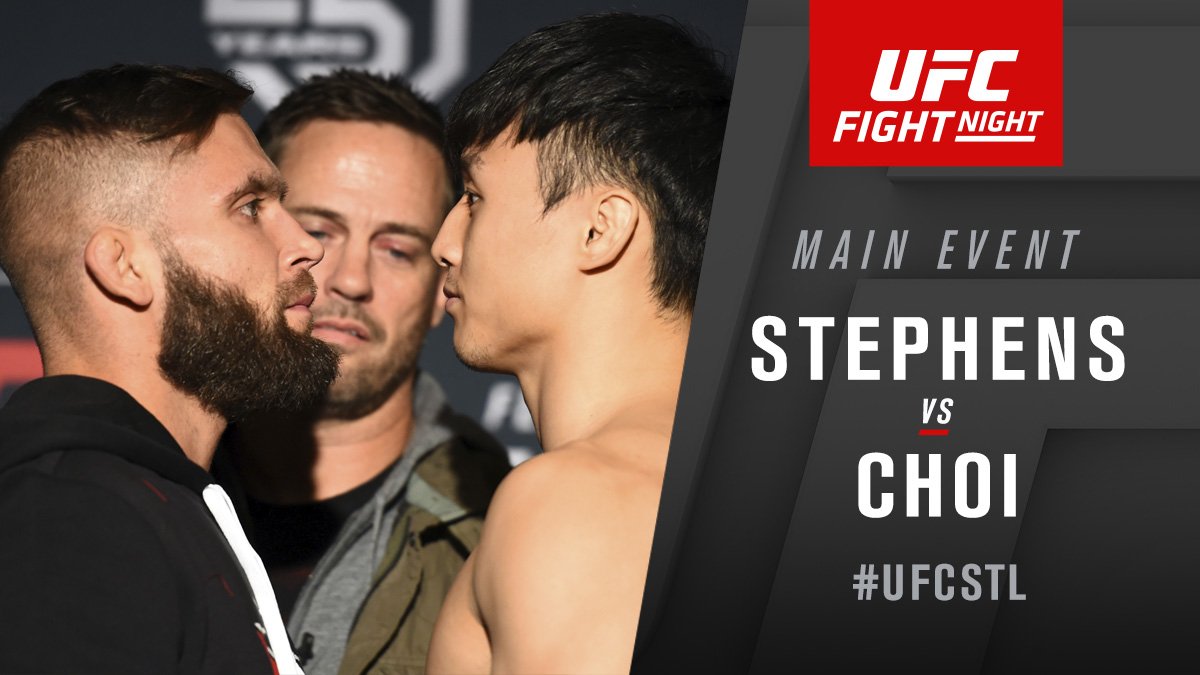 Round 1: Both men started cautiously, with Stephens showing respect to Choi, and not starting callously as he had done in the past. Stephens worked with leg kicks and 1 – 2s, while Choi slipped Stephens’s attempts, and landed his own shots. Both men then clinched, as Stephens went to the body with some crisp shots. Neither fighter gave anything away, as round one ended with Stephens throwing more, and staying active.

They're exchanging in round 2!! Here we go again!! #UFCSTL pic.twitter.com/j9qYMSc7Ja

Round 2: Choi started the second round with a head kick, but Jeremy retaliated with a solid right of his own. Both fighters slipped, but Jeremy got into this own, tagging Doo Ho Choi with some excellent jabs. Jeremy then connected with a big over hand right, sending Choi to the mat. Jeremy swarmed in, and landed some hard G n’ P, as the referee stepped in to stop the fight!

Stephens ROCKS Choi, then finishes him off!!! @LilHeathenMMA gets the 2nd round finish!! #UFCSTL pic.twitter.com/Ds0Dm34aI6

Winner by TKO (punches) in round 2: Jeremy Stephens 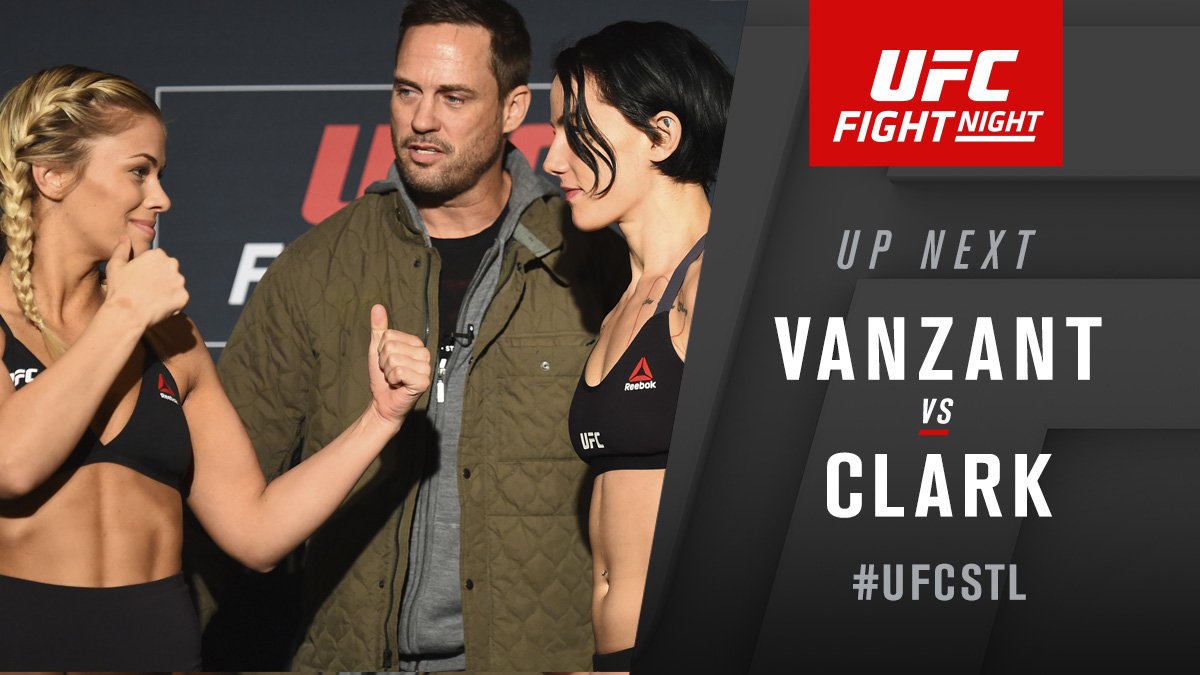 Round 1: Paige tried to use her switch kick that she used to beat Bec Rawlins, as Jessica and Paige were more than happy to engage, with Jessica connected with a good right. Jessica took Paige to the ground, and tried to get Paige’s back. JRC controlled the fight from the top position, and tried to go for an arm triangle, but Paige managed to get her arms out of position. Jessica then got into PVZ’s half guard and threw bodyshots to end the first round.

Spinning back fist from @PaigeVanzantUFC lands, then she gets JRC to the ground! #UFCSTL pic.twitter.com/xh50dh4W4t

Round 2: Paige looked to keep the fight standing, and connected with a spinning back fist which rocked JRC! Jessica and PVZ clinched, with Jessica securing a takedown once again, getting the top control. There was a brief stagnation in the activity, as Yamasaki told both the fighters to be active. Jessica then trapped PVZ in a triangle choke, but couldn’t get her arm across to lock it in completely. JRC threw some elbows to PVZ’s face to end the second round, with PVZ hanging on.

Round 3: Paige told her corner that she broke her right arm, and relied heavily on her kicks in the beginning of the third. PVZ went for a high knee and switch kicks, while Jessica maintained her distance to stay away from the kicking range. Both the fighters kept the fight on the feet, with PVZ throwing body kicks, while JRC connected with a combination. Paige still threw with her right, as JRC relied on her counter strikes, waiting patiently for PVZ to over – commit before landing with her rights. JRC threw a body kick and a left hand to end the third round. 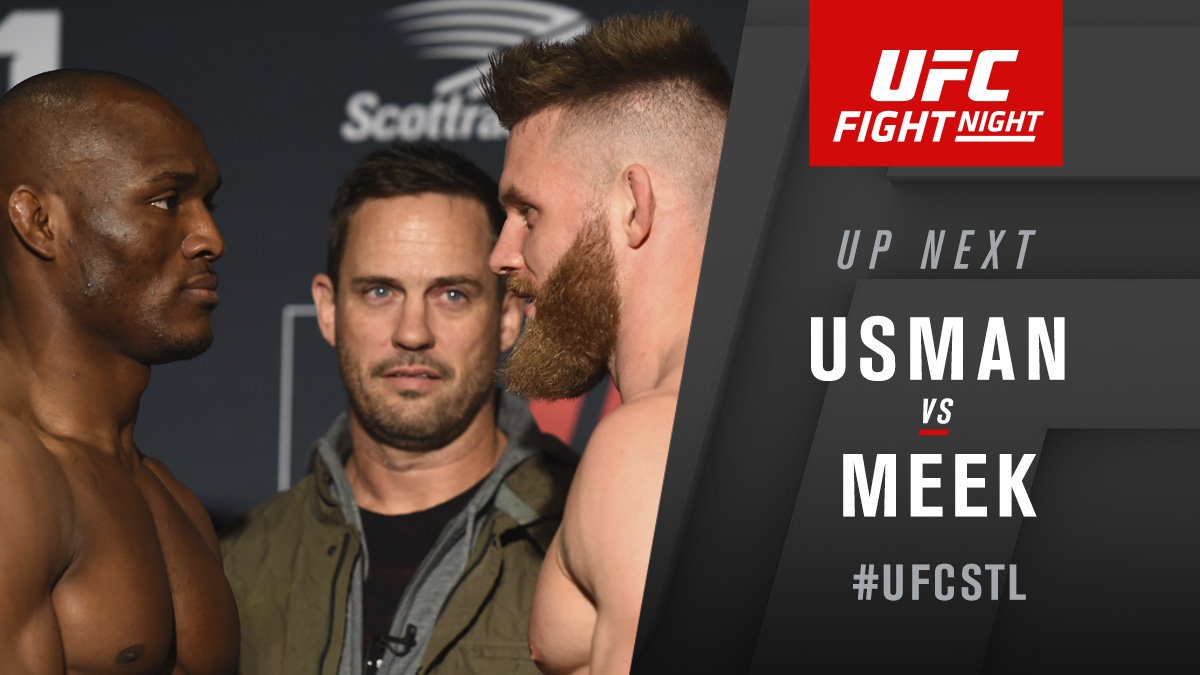 Round 1: Emil, for some inexplicable reason initiated a takedown, and played right into Kamaru’s hands. Usman then dominated Meek on the ground, piling pressure on him, using his grappling to obtain top control. While Meek tried to fight off his back, throwing short forearms and elbows, it was all Usman, as he ended the round in a dominant position.

Round 2: Usman once again took Weber down with a double leg, and worked on Meek. The second round went much like the first, with Kamaru having the positional control, working on Emil from the top. While Weber tried to turn things around, Usman worked in Weber’s guard, and threw large volume of strikes, effectively taking both the rounds.

Round 3: Usman, after landing some serious elbows in the previous two rounds, opened Weber up easily in the third. Kamaru showed off his strength, as Meek tried to connect with elbows. Usman, however, managed to ground Meek again, and showed his dominance on the ground. By the end of the fight, it was clear that Usman, being the more dominant grappler, had the fight in his pocket. 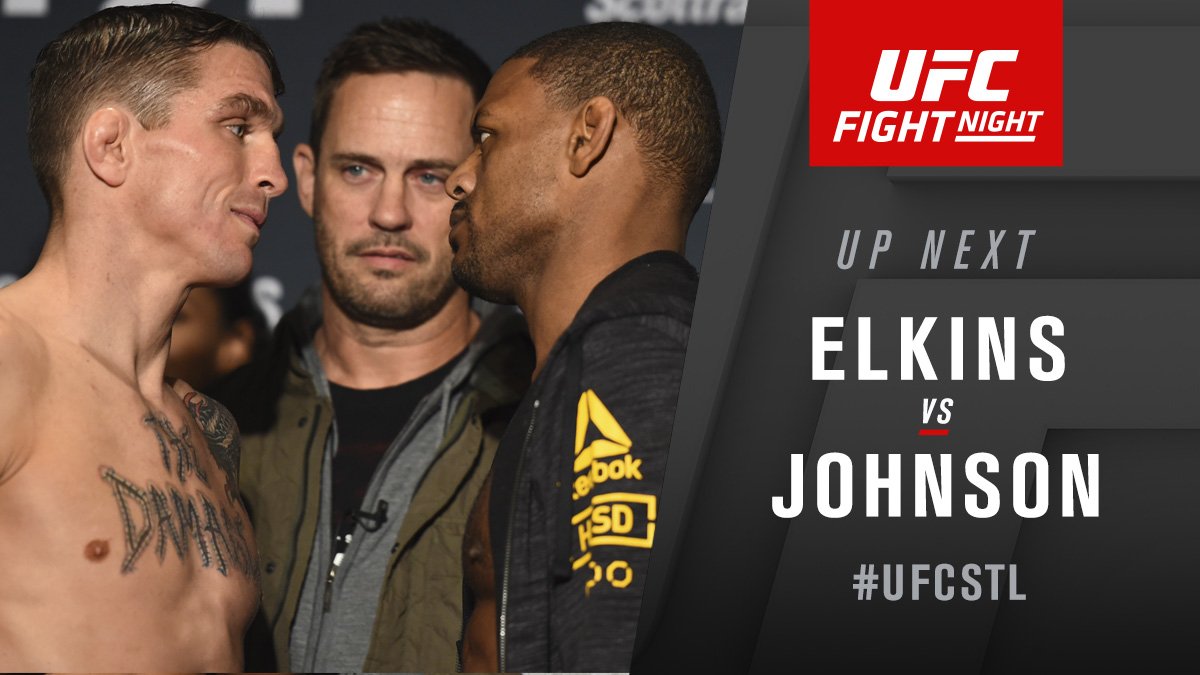 Round 1: Michael Johnson made his featherweight debut against the man that made the comeback of the year in 2017! Johnson immediately proved his boxing prowess, with his heavy output putting Elkins under pressure. The gritty veteran stayed in the fight, while Johnson poured on the punches, and ended the round one in dominant fashion.

Round 2: Elkins managed to get Johnson to the ground, after eating more punches from Johnson. However, in true Elkins fashion, he once again managed to stop Michael by choking him out!

Winner by rear – naked choke in 2:22 minutes of round 2: Darren Elkins

Polo Reyes defeated Matt Frevola by KO (punch) in 1:00 minute of round 1