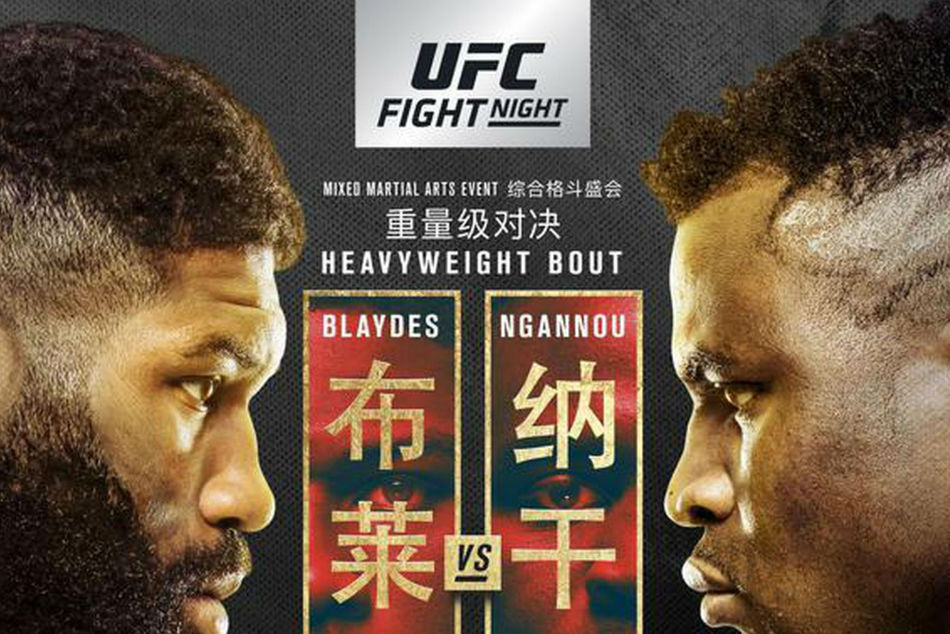 The Cadillac Arena has become an important part of Beijing’s Olympic Games along with allowing citizens to enjoy sports, leisure, recreational and commercial activities. The Cadillac Arena is the biggest entertainment venue in Beijing, with many international events taking the centre stage. This historic arena is now the venue for UFC’s first trip to Beijing coming this Saturday. UFC Fight Night 141 will feature a rematch between the current top five ranked heavyweight fighters, Curtis Blayde and Francis Ngannou. This fight will have title implications in the heavyweight division since the winner stands a good chance to face Daniel Cormier and challenge for the Heavyweight Title.

These two monsters and heavyweight contenders duke it out for the second time at UFC Fight Night 141. It was in early 2016 when Francis Ngannou handed Curtis Blaydes a loss on his UFC debut. On that night, Ngannou was the better fighter while showcasing his powerful striking attack to earn a TKO victory, but two years down the line things look different. According to Daniel Cormier, the current heavyweight champion, “Curtis Blaydes has only got better and better and is on the cusp of fighting for Heavyweight Title”

As NJCAA wrestling champion, Curtis carries a potent heavyweight wrestling style that translates well to MMA. Since the loss on his debut at UFC Fight Night 86, Blaydes hasn’t tasted defeat in six straight fights, including a vicious TKO over his last opponent Alistair Overeem at UFC 225. During the fight, The American demonstrated the discipline of when to engage and when to fight at range, the qualities he lacked during his debut match at UFC Fight Night 86.  The upcoming UFC Fight Night 141 will provide Blaydes an audience to make his case for a shot at the belt if he can avenge the only loss of his UFC career.

The Cameroon will get inside The Octagon high on confidence knowing that he got the better of his opponent the first time around through a TKO victory. Famously known as The Predator, Ngannou has lived up to his nick name and finished four victims until he ran into former champion Stipe Miocic at UFC 220. He then lost his second straight fight in a forgettable performance against Derrick Lewis but now Ngannou will attempt to turn things around while facing the streaking Blaydes, who is going to attempt to make his case for a shot at the belt.

The former DREAM Champion and title challenger will attempt to get back on track following two straight losses. While “The Reem” has endured a tough stretch, his two losses have come against the heavyweights fighting in the main event and he’s now training full-time alongside Blaydes in Colorado. Overeem remains one of the best heavyweights to ever compete in mixed martial arts and he’ll look to prove that on Saturday in China.

Pavlovich is a young beast who relinquished his Fight Night Global heavyweight belt after signing with UFC. He will be making his UFC debut with in The Cadillac Arena and will be eyeing to start off his UFC career with a win against the well-traveled legend. With the frame to match his counterpart and possesses the same knockout power, it’s the experience within The Octagon that’s missing for the young beast.