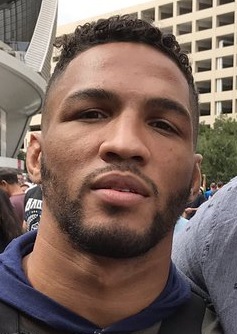 Kevin Lee moving up to Welterweight to take on Dos Anjos

UFC fans have been spoilt of late with big fights not just coming thick and fast, but delivering on all fronts. The schedule is not letting up either as the new ESPN era of the promotion starts to gain traction. May 18th sees another intriguing match up at Rochester NY’s Blue Cross Arena.

Since moving up to Welterweight, Dos Anjos immediately looked like he was going to make waves. Wins against Tarec Saffiedine, Neil Magny and most notably a unanimous decision against Robbie Lawler in a main event meant he was very much in the conversation of the best in the division. Back to back losses against Colby Covington and the new belt holder Kamaru Usman derailed his ambitions slightly. Those two look set to go head to head for the title in the coming months, and Dos Anjos will be looking for a convincing performance and result against Lee to put his hat in the ring as the winner’s next opponent. It is easy to look at the number of recent losses on the Brazilian’s CV (4 of his last 7 fights), but as well as the two names already mentioned the other two came against Eddie Alvarez and Tony Fergusson. The last person to beat him before that was a certain Khabib Nurmagomedov. The former lightweight champion has looked very impressive at his new weight until he has stepped up to the elite level, when he has not quite had enough to get his hand raised. The question is whether Kevin Lee represents that step up in class or not.

The Motown Phenom is looking to emulate his opponent’s smooth transition up to 155lb with this headliner being his first at welterweight and coming off the back of a unanimous decision loss to Al Laquinta last December. Like Dos Anjos, Lee put together a string of results that shot him up the rankings only to fall just short. Making the weight was an issue, so at 155 he will be hoping that an easier cut will mean he steps into the octagon the best fighter he can possibly be. He is likely to come in as slight underdog, but this is a fight that is incredibly hard to pick, and you can make a case for either fighter. Oddchecker has a preview and parlay picks on its site, and often – as in the case of the recent Crawford Khan fight – gets it spot on.

The Best of the Rest

The co main event sees number 13 ranked Neil Magny take on number 15 Vicente Luque with both men looking to break into the top 10. At lightweight, Charles Oliveira and Nik Lentz battle it out while the evening also sees the UFC debut for the Canadian Feenom and Invicta FC Featherweight champion Felicia Spencer as she takes on Megan Anderson, who is coming off her victory over Cat Zingano last December.