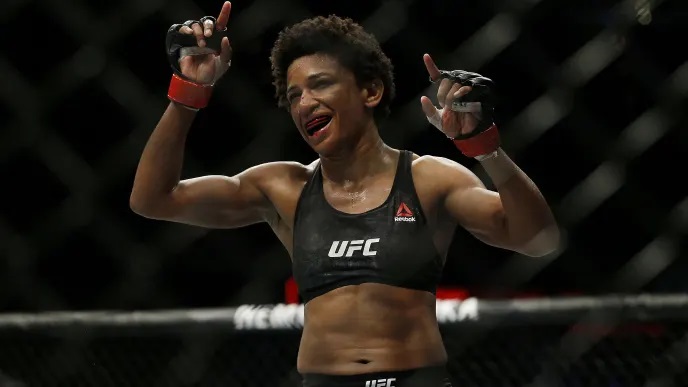 Angela Hill competed four times in 2019 and was more than willing to step up when Hannah’s opponent pulled out in the days leading up to the fight. Looking to make a quick turn around and confident of picking up a win over Hannah, Hill fully capitalized this opportunity to kick start her 2020. In the first round, both straw weights exchange a series of punches but Hill with her reach advantage gets the most of it. Hannah is struggling to get inside and land any of her strikes on Hill. Her attempts to clinch get sidelined as Hill’s Muay Thai background is making her difficult to even get close to her. Hill ends the round with a right hand and a spinning back fist that lands clean. In the second round, Hannah senses urgency and begins to throw leg kicks and punches in bunches. Hill relies on her Muay Thai to clinch Hannah and then proceeds to sweep her onto the mat, landing in side control. Hill gets the full mount and is in a dominant position. Big elbows and punches land on Hannah who struggles to defend. Hill is known for her ground and pound and as she lands few more brutal elbows ref watches closely. As Hannah starts to bleed, the ref stops the fight at 4.26 mins of the second round.