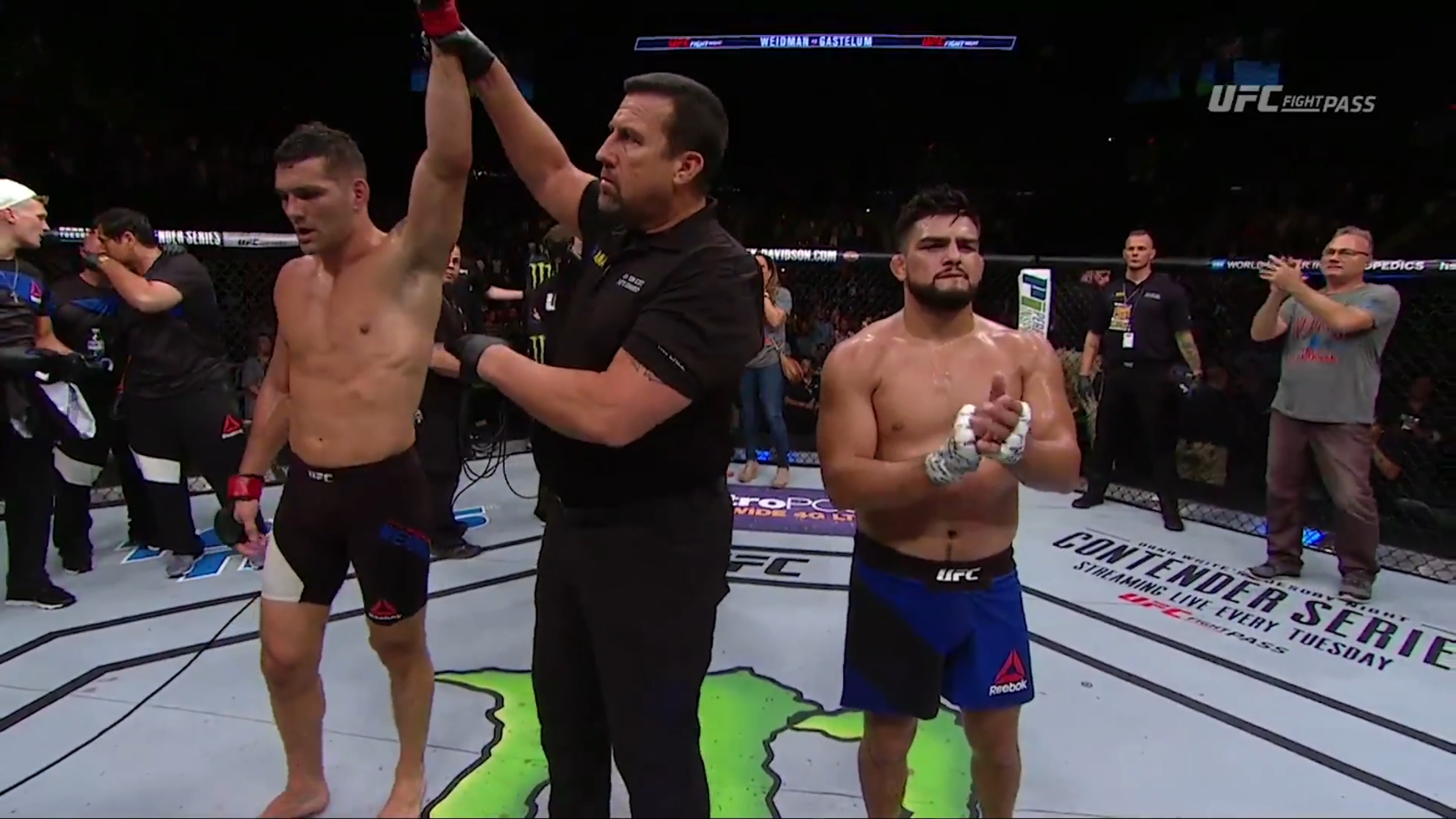 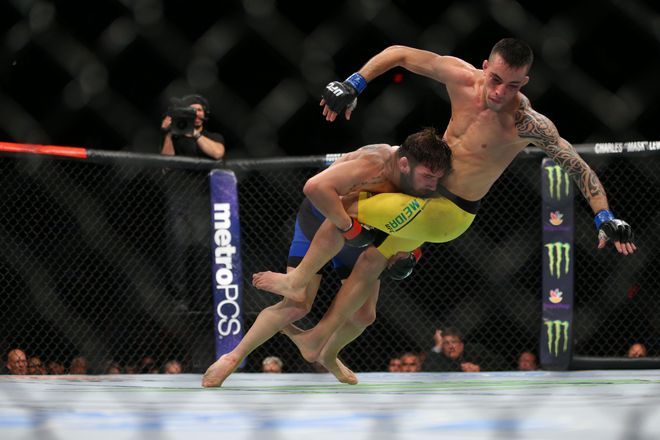 Jimmie continues with his winning streak as he decisions his way to victory improving his UFC record to 5-0. In the opening round, Jimmie took the lead by landing some heavy right hands and hooks on Almeida resulting in two knockdowns trying to survive the onslaught brought on by El Terror. In the second round, Almeida came back to land his own right hand and then a roundhouse kick to the head to score a knockdown as he drops Jimmie to the mat. In the third, it was a very close fight as both the bantamweights tried to apply their game plans to get ahead of the score card. Jimmie was successful in his takedowns and counter strikes as he lands knees, right hand to end the round. The judges scoffed the fight 29-28, 30-26, and 30-27 in favour of Jimmie.

The resilient Patrick proved once again his toughness as he gets a split decision win in a gruelling 3 round fight. As the first round begins, Patrick goes for a single leg takedown but Gian is quick to make an escape. Patrick foes for another failed takedown but Gian lands some heavy combos that shake Patrick. There’s a cut on Patricks left side of the head as both the light heavyweights clash going forward. In the second, Patrick continues with his game plan of trying to take Gian to the mat, but failing to do so and in the process Gian starts to have issues with this cardio and slows down. In the final round, Gian lands a quick jab and wobbles Patrick for a moment. Patrick lands his own left hook and jab sending Gian backwards. It is bloodied Patrick who maintains the forward momentum as the final round comes to an end. Judges score a very close 29-28, 29-28, 28-29 in favour of Patrick Cummins 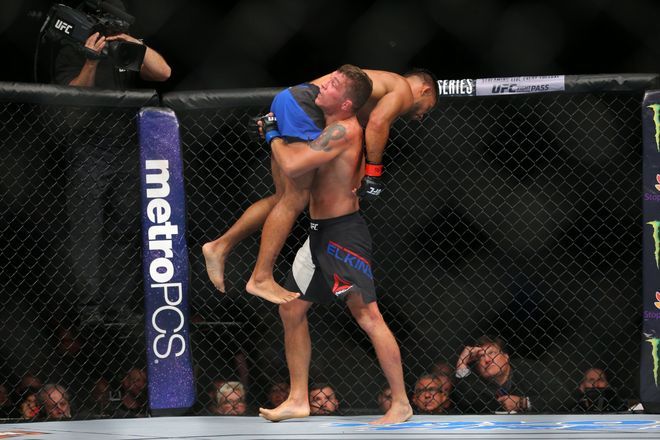 Darren Elkins wrestles his way to a tough and close decision win as he improves his record to a 5-fight win streak inside the UFC. In the first round, Elkins got the better of Bermudez who was aggressive on his feet pressing forward trying to land heavy shots. Elkins was smart enough to avoid them and instead go for the takedowns. Once he got hold of Bermudez he just kept on pulling him down every time he tried to get back up with his body lock. In the second round, Bermudez had to adjust his game plan by defending the take downs and landing his own powerful take down. As the round nears to the end, Elkins gets Bermudez’s back and pulls him down to the ground. The third round was a very close one as Bermudez kept the pressure using his strikes and clinch control. Elkins kept on defending the clinch and getting out of danger by ending the round with an attempted takedown. Judges scored the fight 29-28, 28-29, and 29-28 in favour of Darren ‘the damage’ Elkins. 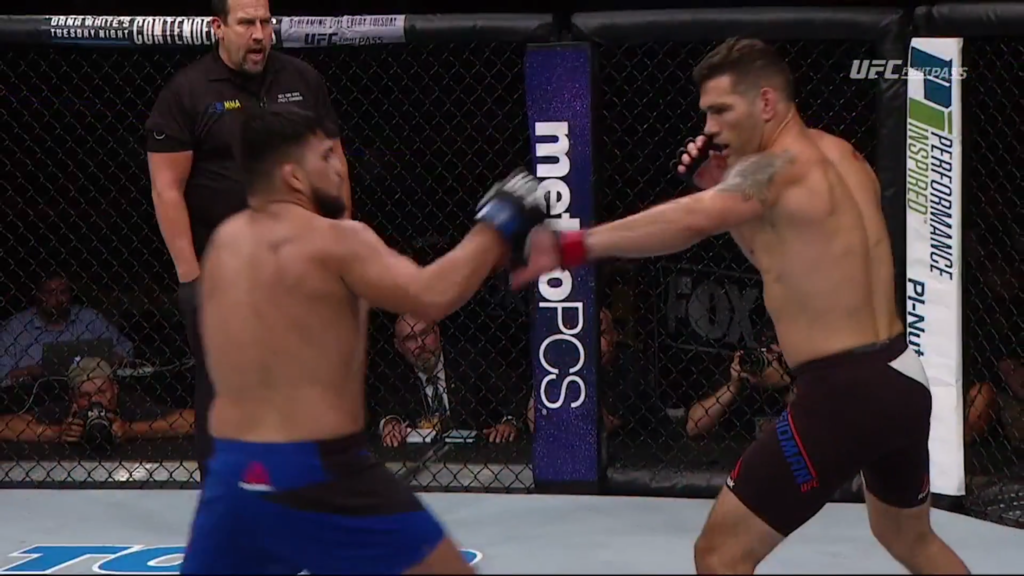 Chris Weidman is finally back to the winning side as he submitted Kelvin Gastelum in the third round. But it was not an easy win as Chris had to overcome adversity in the first round as Kelvin landed a straight dropping Chris to the mat. Chris clung to Kelvin’s leg as he struggled to get back up and ith just seconds left in the round there was nothing Kelvin could do more. In the second round Chris displayed his top-notch wrestling and takes Kelvin’s back as he proceeds for a rear naked choke. Kelvin tries to get back up, but Chris pulls him down again and again to get that takedown he was going after. In the final minute of the round, Chris gets the top position and then the back but time runs out for him. In the third round, Kelvin came out aggressive and swinging for the fences as he was confident his striking would put Chris to sleep. Chris pursues his wrestling game plan and gets a takedown. Kelvin gets back up but Chris gets a waist-lock and lands a knee that gets Kelvin to the floor. Seeing an opportunity Chris sets up an arm-triangle then transitions to a choke. It’s only a matter of time that Kelvin would eventually tap and he did at 3:45 secs of the third round.

Other highlights of the nights were Alex Oliveira, Junior Albini Eryk Anders winning via KO/TKO. Alex Oliveira knocked out Ryan LaFlare with a well-timed short right that puts Ryan to sleep in the second round. While Albini landed a brutal knee to the midsection followed by a left hook dropping Timothy Johnson to the ground unable to defend.