For the first time in UFC® history, the promotion is in Busan, South Korea with a highly anticipated featherweight main event as No. 4-ranked contender Frankie Edgar faces hometown hero and No. 6-ranked contender “The Korean Zombie” Chan Sung Jung.

UFC® FIGHT NIGHT: EDGAR vs. THE KOREAN ZOMBIE takes place this Saturday, December 21, at the Sajik Arena. The prelims will start at 4:00pm Korea time, and the main card will be live at 7:00pm. Ahead of the event, athletes spoke about their opponents and matches. 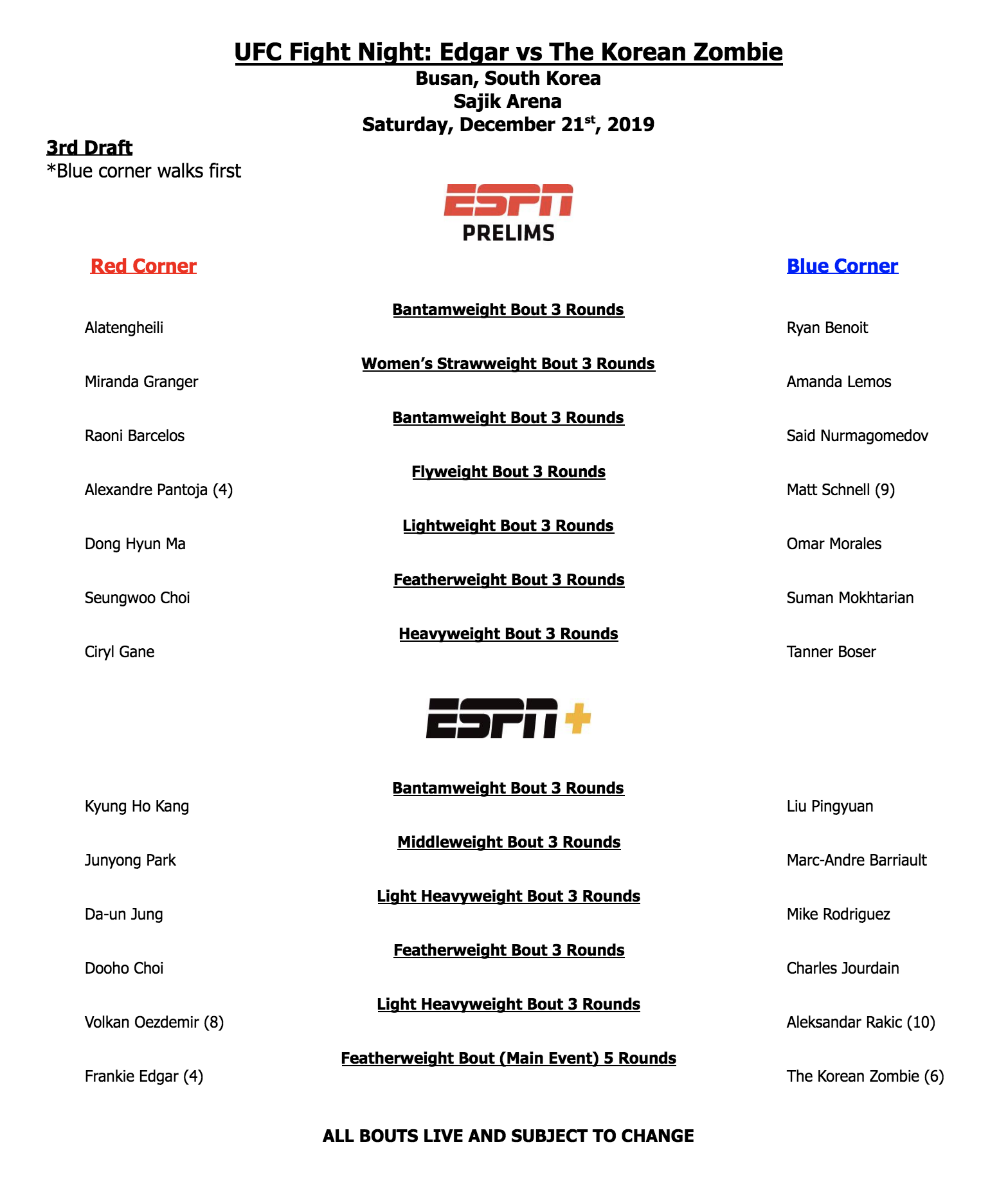 On fighting in his home country:

“It’s been way too long since I’ve fought in Korea, so I’m considering it my first fight in Korea. Being able to headline as the main event is a great pleasure. At the workouts, apart from a numbered event, that was the greatest crowd I’ve ever seen. That’s when I realized that South Korea is great. I wanted to respond more to the crowd, but I heard Frankie was next in line so I quickly made my way out.”

On training for Frankie Edgar:

“I used to tape all of my training sessions, and when I watched them all I saw all the holes I have. This year is going to be completely different. All the holes have been mended. Our coaches brought in wrestlers who were of similar build and style as Frankie, so I was practicing with a lot of collegiate wrestlers. After we trained and sparred, my coaches and partners told me I’d have no problem facing Frankie. Frankie says that he can take me down, but he won’t be able to do it. I’m pretty confident I’ll come out with the win.”

“It’s better for me to test myself and go to a decision, rather than for going for a submission or a knock out. There may be a knock out before going into the last round, but I think it’s the best opportunity to test out myself within the 25 minute frame. What I’m excited for is to see how much I’ve improved from my last fight. I’d like you guys to focus on that, and it will make the fight more entertaining.”

On taking the fight:

“I’ve really wanted to face Zombie, he’s a tremendous opponent. His fighting style is one that I’ve wanted to match up against. I’ve fought once in 2019 and I wanted to get one more in.”

“Chan’s a tremendous fighter. He hits very hard, he has a great chin. That’s why they call him Zombie, because you can’t put the guy away. He’s got some really good submission skills as well. When I fight anybody, I’m going to try and take them down. So I’m going to take Chan down. I think I’m going to win the fight.”

“I’ve fought three times in Asia so I was excited to come back here and fight. Korea’s a very nice country, you’ve welcomed me with open arms. I’m going to put on a show for you. Zombie, let’s give them a show.”

“He went on a winning streak, but he hasn’t faced anybody in the top ten. I started (in UFC) fighting the top ten, it’s different. His best win was against Manuwa who was on a losing streak with some bad knockouts. Now he’s facing the top ten. I’m here to show that I’ve cemented my place in the top ten and I deserve to be here.”

On the key to the fight:

“I don’t have any holes in my game. I’m comfortable everywhere. The key to this fight will be the timing, to counter off his speed. I am the more powerful puncher in this fight but he will try to keep the fight moving to be in and out quickly. So timing will be key.”

On fighting in Asia:

“I grew up watching Pride, and watching people fighting in Japan. I always wanted to be fighting there, so fighting in Asia, it’s a dream.”

“Against Volkan, we studied him a lot. One of my coaches was training with him for a while so we know him pretty well, what are his weaknesses and strengths. But I’m on a different level. I’m young, explosive, strong and smart and those are going to be my keys for success.”

On support as an Austrian:

“I get support from all of Europe. My country where I live, Austria, and my motherland Serbia. And Croatia and Bosnia, I get a lot of support from them too. I’m so happy about this. It gives me a lot of strength and motivation to put on a show for them and all of you guys.”

On his comeback fight:

“I’m very excited about the fight and a little bit nervous because I didn’t fight for a long time. I’ve only been allowed to fight in Korea (military service). It was a difficult fight camp, but I’m now prepared for everything.”

On the future of Koreans in UFC:

“When I started in UFC, there weren’t many Korean fighters here. I think for Korean fighters to get here, they need to work hard on their wrestling and everything else, and they themselves have to really enjoy fighting.”

On his plans for the bout:

“My opponent thinks I don’t have kicks because I haven’t shown them in my fight. But I train kicking with everything else at the gym so I can do it in the cage too. I think he’ll find some surprises this time.”

“His punches are good, but he has no kicks. It’s important to end your combination with kicks because that’s where there are more openings. We’ve seen fighters like GSP on his comeback after three years and be perfect, and others who are absolutely worse. I don’t want to tell myself he’s going to be worse or better, so I’m prepared for whatever version he’s able to bring.”

On his plans for the bout:

“I’m a spectacular fighter. I have a 100% finish rate. You have two fighters who are very explosive so you guys are in for a treat. He said he’s going to end it in the second round, but I want a war with him because nobody knows me yet. If I get an early finish, I’m not going to be satisfied.”