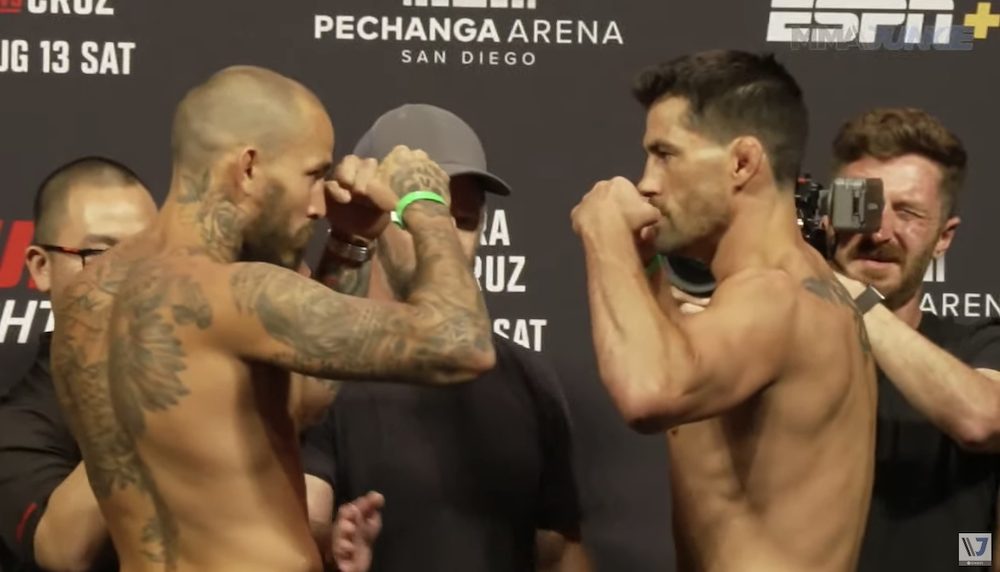 UFC Bantamweight contender Marlon Vera is set to square off against the former division champion Dominick Cruz in the main event, while Nate Landwehr will go up against David Onama in a Featherweight clash at the UFC San Diego event, scheduled for Saturday night August 13. The show will emanate from the Pechanga Arena in San Diego, California.

In the headlining clash, Marlon Vera is eyeing to secure his first UFC bantamweight title fight after moving up the rankings. He is heading into the bout with a hot three-match win streak. “Chito” has been on a great run as of late.

Four years back, he stopped Wuliji Buren at UFC 227. That victory kicked off a five-fight run of success, which was followed by a debated defeat at the hands of Song Yadong, his win over Sean O’Malley, and a close loss to Jose Aldo.

Meanwhile, The inaugural UFC bantamweight champion Dominick Cruz gets to fight in front of his hometown on Saturday night for the first time since 2009. Following his return in 2020 to challenge Henry Cejudo for the title, he contended in the loaded division. A pair of wins over Casey Kenney and Pedro Munhoz has Cruz brimming with confidence.

In the co-main event, Nate Landwehr and David Onama will finally share the cage. It has been a bumpy ride for Landwehr through his first four UFC starts. He tallied alternating losses and wins while always bringing his personal brand of entertainment into the cage with him.

In his last outing, the former M-1 titleholder displayed his submission skills, and finished Ludovit Klein in the third round with an anaconda choke, collecting a Performance of the Night bonus in the process.

After a violent 8-0 run on the regional circuit, winning five of them in the first round, Onama dropped a unanimous decision to fellow featherweight Mason Jones in “The Silent Assassin’s” Octagon debut. Onama bounced back with consecutive wins over Gabriel Benitez and Garrett Armfield, putting his finishing power on display.