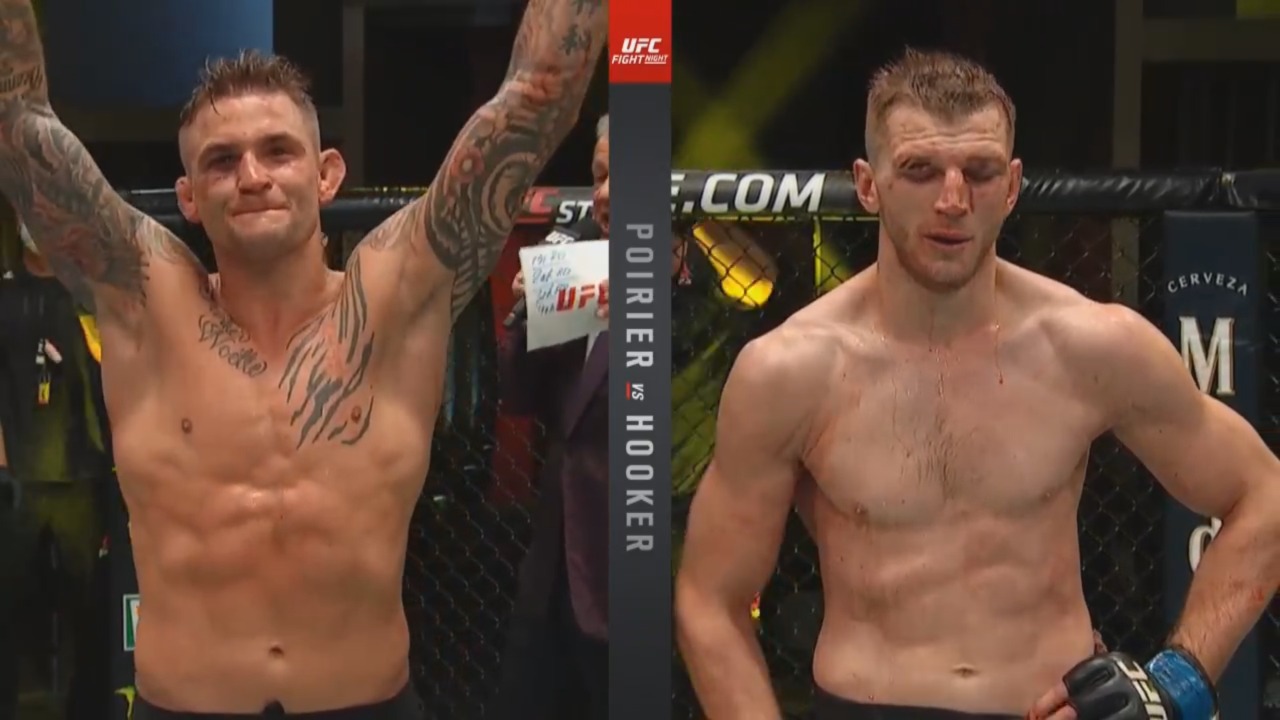 The final UFC Fight Night: Hooker vs Poirier at the Las Vegas UFC APEX takes place this weekend before heading out to Fight Island in the United Arab Emirates for the month of July.

Here are the full results:

ROUND 1: Mike Perry pressing forward and comes in swinging. Gall is circling the Octagon and he doesn’t look comfortable fighting backwards. Perry is getting the better when both fighters are trading punches. Good kick to the body 90-seconds into the first round and then Gall hits Perry with a low kick.

Back to back right-hand lands for Gall followed by a leg kick. Perry lands a huge PowerShot on Gall. Perry’s face is getting red from all the strikes Gall is landing. Huge body slam by Perry and now he is trying to get a triangle, but nothing comes to fruition. However, Perry maintaining his top position and now he lands a couple of punches at the end of the round.

ROUND 2: High kick lands for Perry and then follows up with a body kick, but Gall manages to counter him. Gall goes for the single-leg takedown, but Perry showing impressive takedown defense.

Perry trying to escape the guillotine and land ground and pound, but impressive display of grappling by Mickey Gall so far. Gall tried to go for the Kimura, but Perry managed to escape and now he has Perry pushed up against the cage.

Mike Perry drops Mickey Gall with just 20-seconds left on the clock and then hammers his elbow on Gall’s face in the final five seconds of the second round.

ROUND 3: Superman punch to start the round and then couple of leg kicks. Overhand right followed by an uppercut lands for Mike Perry. Gall lands a jab while backing up. Mickey Gall is getting outpunched with just 3 minutes remaining on the clock. Perry is letting his combinations rolls and is looking the fresher of the two fighters. High kick followed by overhand right land for Perry. The fight now goes to the ground, but Perry is maintaining the top position and is landing his elbows and now is in a crucifix position. Perry is landing massive elbows in the final 30-seconds and causing heavy damage.

ROUND 1: Hooker is moving to the weak side of Poirier. Hooker has already landed two calf kicks and nothing of significance from Poirier. Two back to back low kicks to the groin from Hooker. The kicks are causing Poirier some trouble. Body lock for Poirier as he pushes Hooker towards the cage.

Two back to back body kick from Poirier which backs up Hooker and now he follows it up with a two overhand rights. Hooker lands a knee, but Poirier with a stick and move.

Poirier is landing hard bombs on Hooker and is looking for a takedown. So far, Hooker has taken the shots well but is bleeding profusely. Both fighters are trading huge punches and Hooker lands some hard punches on Poirier in the final seconds of the second round.

ROUND 3: Poirier with a kick to the body followed by a counter hook to the top. Overhand right lands for Poirier. Poirier landing the cleaner shots in the third round and timing his shots well. Hooker goes for the takedown, but Poirier has Hooker under a tight guillotine, but the Kiwi manages to escape. Poirier landing short elbows and punches on Hooker from his back and trying to attempt a lot of submission attempts.

ROUND 4: Dustin landing some clean jabs as Hooker moves backwards, but Hooker manages to takedown Poirier, but the ground position doesn’t last long as Poirier gets up on his feet quick.

Dustin scored a takedown and landing body shots from the top as he secures the hand control. He is landing heavy elbows on Hooker and there’s not much resistance from the Kiwi. Dustin now secures an arm triangle but fails to execute it.

Both fighters get up again, but Dustin manages to sink in a guillotine with few seconds left on the clock.

ROUND 5: Poirier is dictating the pace of the fight so far. He is outboxing Hooker and landing some clean punches. Not enough action going on as both fighters look burnt out. Hooker shoots for a takedown, but Dustin showing terrific takedown defense. He then fires a two-punch combination that snaps Hookers’ head back off.

Hooker manages to score a takedown but fails to execute anything of importance as both fighters get back on their feet. Dustin lands two back to back hard right hands.