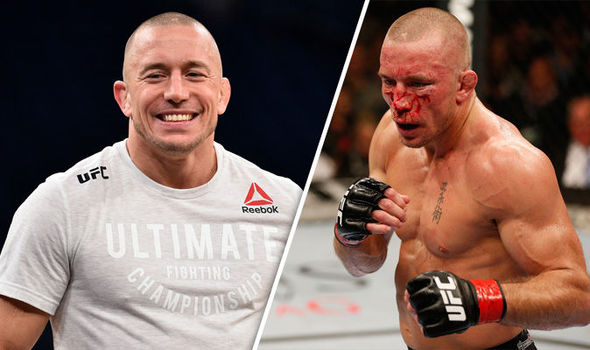 Former welterweight and middleweight champion Georges ‘Rush’ St-Pierre has achieved pretty much everything that a sport has to offer. However, he has always been humble about his achievements and has said numerous times that he doesn’t consider himself as the GOAT.

However, he has a lot to say about PED users and has said that they should be removed from the GOAT discussion. Georges has always pushed for drug testing in the UFC, even when USADA even partnered with the promotion.\

He recently spoke to MMAFighting and he said:

”With people, they think it’s only affecting strength and conditioning and stuff like that,” St-Pierre said. “No, it doesn’t. It’s not only recuperation — it changes the person entirely. It makes him a better athlete. And yes, I think they should be removed from the [GOAT discussion].”

“It’s very hard to say that because a lot of people, they work hard. We know if they got caught once or twice, but we don’t know if they’re all taking it for all of their life or not, so it’s a hard topic to say. It’s not black or white. It’s grey.”

He said he has trained with athletes who have been on PEDs and knows about the advantages they give to a fighter.

”I’ve trained with them, and you could see a huge difference,” he said. “Like, when you grapple with them, it’s not even the same guy. It’s like if you’re taking two different human beings. It’s completely insane.”

“Just look at the difference with some of the — I’m not saying any names, because I don’t want to attack an individual, I want to change the system — just look at the difference with some people. Look, I remember there was a fight between two opponents, and one guy said, ‘Oh, it’s not the performance-enhancing [drugs] that threw the kick. It’s me.’ Actually, it’s not true. That’s the performance-enhancing drugs that threw the kick, because you wouldn’t have thrown the kick [like that] if you would have not taken them. You know what I mean? So to give you an example, it makes you more creative, it makes you more hungry. It changes the physique. Also, not only the physique, it changes the mind of the person.”

Previous articleDana White slams Scott Coker in a lawsuit deposition
Next articleTullamore Dew vs. Proper 12 vs. Jameson: Which Irish whiskey tastes the best?