UFC: Georges St-Pierre mocks the Nick Diaz with faux confession about foul play prior to their fight, feels that Diaz is paranoid

Georges St-Pierre recently made an appearance on UFC colour commentator Joe Rogan’s podcast, The Joe Rogan Experience. On the podcast the former two-weight UFC champion discussed the allegations made by the Diaz brothers and went on to deliver a hilarious faux confession in which he confirmed all of Nate and Nick’s allegations. GSP further claimed that the Diaz brothers are paranoid and thus always feel that everyone is conspiring against them. Here’s what he had to say:

They said that I took steroids when I fought [Nick], I messed up my wraps, I didn’t make weight, and I put something in his IV. . . I gotta confess, Joe. I gotta confess. I was so scared of fighting Nick Diaz so we poisoned his IV. But he survived so I was even more terrified, so all the athletic commission was on my payroll so they tricked the weigh-in and I made it. But he went through [with the fight] so I was even more terrified, so the alien abducted me and put the gamma rays to increase my strength like the Hulk, like a performance enhancing drug. But the fight was still happening so right before I put some glass and cement in my gloves to make sure, and I still had a crazy hard fight. [Laughs].

​It’s completely insane. . . I think he has a problem of conspiration (sic), He thinks everybody is against him. . . I think that’s what it is. I don’t know if it’s the weed but maybe weed with the social environment and genetics can create some kind of disorder in the brain and make you have conspiracy problems. You think everybody is against you. I’ve seen a lot of my friends who smoke a lot have this problem. Sometimes they’re paranoid. 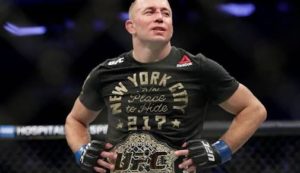 He then went to state that Nick Diaz is a really good fighter who is still in his prime and should be competing.

There’s reaction time and reset time when you fight, Nick Diaz, he makes people tired, that’s why he wins fights. He’s kind of a slow guy but people get more tired than him quickly, especially in their nervous system. . . Nick Diaz, that’s why he’s so good and it’s sad for him that he doesn’t fight. His best years are now! He should be fighting now! He should do it now.

WWE: Samoa Joe says his rivalry with AJ Styles will continue in WWE

Previous articleWWE: Big Show talks about Vince McMahon being upset with him before WrestleMania 21
Next articleUFC: Carlos Condit not retiring; wants to return later this year