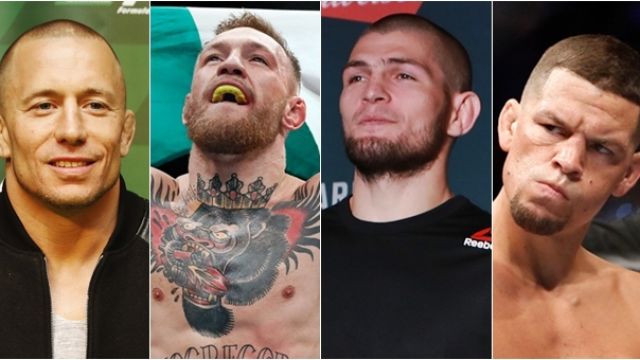 Khabib Nurmagomedov, Conor Mcgregor, Nate Diaz and Georges St. Pierre are arguably the 4 biggest stars the UFC currently employ and are some of the biggest needle movers. 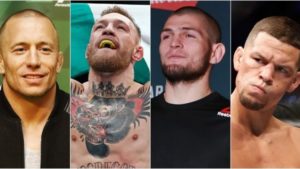 After UFC 223, the plan was to somehow match up these fighters in a mini tournament, to find out who really is the best, according to Ariel Helwani.

After UFC 223, a plan was put in place for a mini tournament involving four of the biggest stars in MMA: Khabib vs. McGregor and GSP vs. Diaz. Winners face off. That stalled. And now Khabib wants GSP — https://t.co/Jlb9FsblbL pic.twitter.com/IOzEg2pGSH

The initial plan was to pit Conor Mcgregor in his return to the UFC with the new LW Champion Khabib Nurmagomedov for the undisclosed UFC 228 in September and make Nate Diaz and GSP fight each other at UFC 227 in Los Angeles on August 4th.

The winners of their respective bouts were tentatively planned to fight at UFC’s blockbuster year end card at UFC 232 at the T-Mobile arena in Las Vegas.

But sadly for fans, the plan has been stalled owing to difficulty in contract negotiations, court hearings and other unforeseen circumstances.

On one side, GSP is struggling with his recovery from ‘ulcerative colitis‘ and has pushed backed his date of return further.

“I’m not ready to fight yet,” he told MMAFighting.com.

“I need to wait until all the symptoms of my ulcer stop. It’s much better than it was but it’s not 100 percent yet.”

“If I try to return for a training camp for a fight it will amplify and go back to what it was in the beginning. I need to get over this first for my own health and safety.”

Conor on the other side is due his court hearing later this month. The UFC will decide on when to unleash their biggest start after the proceedings.

Nate while wanting to return before the summer ends, is likely to return during fall, owing to GSP’s delay.

Khabib though has thrown a spanner in the works by pushing for a fight with GSP instead of Conor.

Ali Abdelaziz, the manager of the Champion Nurmagomedov, clarified their stance on the issue

“We believe the fight to make is the Georges St-Pierre fight at 155 pounds,” Ali Abdelaziz said.

“Khabib wants to fight for legacy and not for a soap opera drama show, and we think Conor doesn’t deserve this opportunity.”

“The guy hasn’t fought in almost two years. Why does he deserve to fight for the title? He should get his ass back in the line and work his way up.”

Khabib has already mentioned before, that he will ‘humble’ Conor Mcgregor once he is champion, but there is one reason, he would be willing to fight him.

“There’s only one reason Khabib wants to fight him: to make him pay for what he did [in Brooklyn]. For Khbaib, it’s not only about money. It’s about disciplining him.

“That being said, UFC should be talking to Georges, not Conor.”

The story is developing and the fans can only hope for a blockbuster second half of the year.