UFC: A guy thanks Nina Ansaroff for protecting him from bullies when he grew up 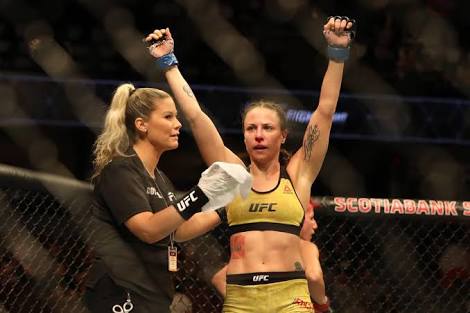 Nina Ansaroff (9-5 MMA, 3-2 UFC) is currently #11 in the UFC’s women’s strawweight rankings and is currently on a three-fight winning streak.

Ansaroff without a doubt reaps the benefits of top class MMA training as she trains at not only one the best gyms in the world in American Top Team, but also trains with her partner current women’s bantamweight champion Amanda Nunes and former strawweight champion Joanna Jedrzejczyk. The results have shown as well as Ansaroff had victories over highly ranked Angela Hill and Randa Markos in her last two fights.

However in a special moment, Ansaroff shared a picture of her average day at the American Top Team where in the comment section, she encountered a familiar face and was sent back into nostalgia.

Ansaroff’s childhood neighbour claimed Ansaroff saved him from bullies and thanked Ansaroff for always being a ‘superhero’. (via Twitter):

We grew up in the same neighborhood – in Bonaventure. You protected me from bullies more than once at the bus stop and on the bus – thank you for always being a super hero!

Ansaroff recalled the incident as well, claiming she hates ‘bullies’. (via Twitter):

I remember you! Wow, you just gave me goosebumps. I hate bullies! Hope all is well! https://t.co/fZaCO13voc

As proven many times, fighters and especially women fighters, were (and are) fighters even before they thought of pursuing MMA. After all its that fighting spirit that has motivated them to move forward.