UFC: Holly Holm successfully undergoes knee surgery, to be out until 2019 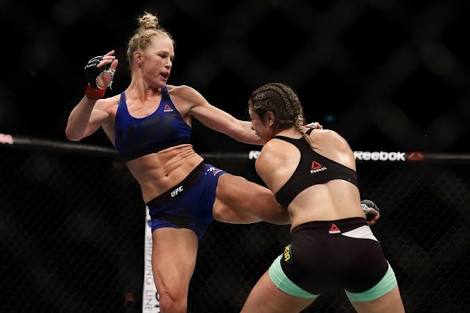 Former women’s bantamweight and former featherweight title challenger Holly ‘The Preacher’s Daughter’ Holm finally got things back on track after being 1-4 in his last five fights with big win against former Invicta FC featherweight champ Megan Anderson at UFC 225 in June.

However Holm suffered a torn meniscus which required surgery. According to ESPN’s Ariel Helwani, Holm did went under the knife last week and the outcome was successful.

The news was delivered to Helwani by Holm’s manager Lenny Fresquez. Fresquez claims Holm to make a comeback around early 2019. Fresquez also claimed that Holm would make a run towards the bantamweight title currently held by champion Amanda Nunes.

Holm, who was a boxing world champion before switching to MMA, had never undergone a surgery throughout the course of 16 years of her combat career.

Holm is 1-2 in her last three fights at bantamweight after losing her title to Miesha Tate and then losing to Valentina Shevchenko. Holly then knocked out dangerous Brazilian Bethe Correia via her trademark head kick KO.