UFC: Israel Adesanya doesn’t want the UFC to protect him 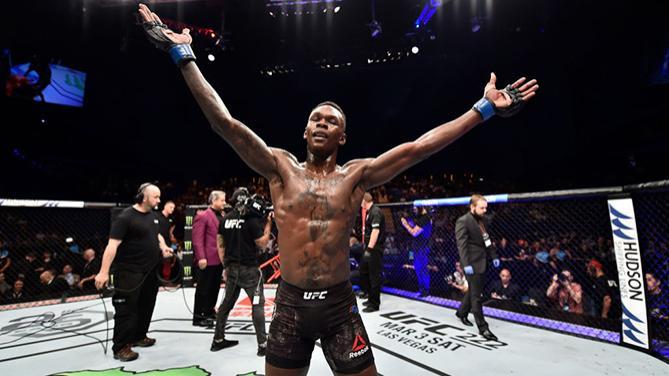 Israel Adesanya made a huge debut in the UFC at UFC 221 when he outclassed Rob Wilkinson. Adesanya’s impressive striking display was the talking point in the MMA community after the event and now, the 28-year-old has come out with some bold statements.

Talking to MMANytt.com, Adesanya revealed that the debut went just like the way he planned.

“This what I’ve been planning for all along. My plan from the get-go was to be an international prizefighter and part of that is having to deal with media and people and all that. For me, I just make sure I keep the same energy. I evolve, but I keep the same energy and my spirit stays the same. Ain’t nothing changing, but the change, and that’s all good for us.” He said.

The former kickboxer then went on to boldly state that he is not in the UFC just to swim with the sharks but to eat them.

“All these other people coming from ‘Looking for a Fight’ and they jump in the UFC after 3 or 4 fights, some of them do well, some of them don’t. Before you swim in the depths of the ocean you got to make sure you can swim with sharks. The difference is I don’t just swim with the sharks, I eat them and that’s what I’m about to do.” He added.

Adesanya holds an impressive record of 12-0 in MMA as of now with all of his 12 wins coming via finishes. He started his MMA career back in 2012 when he fought in the Supremacy Fighting Championship. He then fought in the WLF, FPF, WFC, Australian Fighting championship and Hex Fight Series before breaking into the UFC.

As there is a talk around the block that UFC might end up protecting Adesanya due to the hype he created, the fighter himself has come out and said that he is up for any challenge that comes his way.

“This is all stuff I’ve prepared for and planned for. This feels like déjà vu and I’m just waiting. Don’t protect me, I don’t need it. I’m ready to kick the door down so let’s go all in son,” Adesanya said.

Previous articleUFC: Josh Emmett opens up about the possibility of fighting his teammates
Next articleUFC: Gilbert Burns pulled from UFC on Fox 28 for reportedly being over weight