UFC: Israel Adesanya vs Brad Tavares still on; Thiago Santos to serve as Plan B 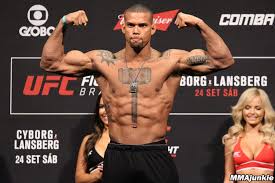 After Dana White issued a statement saying Brad Tavares was out of The Ultimate Fighter 27 Finale’s main event due to an injury, there is still a lot of confusion regarding the status of Brad Tavares. It was reported through several sources that Thiago ‘Marreta’ Santos will be replacing Tavares to face the kickboxing standout Israel ‘The Last Stylebender’ Adesanya on July 6 at T-Mobile Arena, Las Vegas.

Brad Tavares has issued a statement saying the fight is 100% on, and the conflicting reports were a lot of just miscommunication and misinformation.

The UFC has kept ‘Marreta’ as a plan B in case of either Israel or Brad pulling out with any injuries. Thiago will fly to Las Vegas and cut weight and will be ready to replace the headliners of the TUF Finale card.