UFC: James Krause on board with 165 pound division

There have been a lot of talks about introducing a new 165 pounds division and many fighters including Kevin Lee and numerous fans are onboard the idea of having a new weight class.

One such fighter is UFC fighter James Krause who is coming off his big knockout win at welterweight over Warlley Alves a few weeks ago at UFC Fight Night 135. 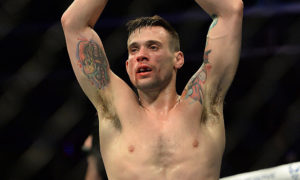 In an interview to MMAJunkie radio, Krause says:

“I felt like this fight, this was my 56th fight, pro and amateur, and I felt like I’ve never been more intimate into a fight ever, in my entire career, I was so into this fight. I don’t know if you guys can see me – I was talking to him the entire fight. I was just so involved. And even after the fight was over, the camera pans at me, and I’m looking at my coach, but I’m not really looking at him. I’m still processing.

“I felt like a different person whenever I was in there, and I think that was my ability to kind of flip that switch. There were times when I would literally just sit in the pocket and eat those kicks just so I could call him a (expletive).”

James Krause says, he is enjoying himself fighting at a higher weight class.

Krause says he has to kill himself to make lightweight and it takes him two months to make weight.

“Whenever everything is even, the power, the strength, all that stuff – maybe sometimes the 10 pounds does make the difference,” Krause said. “I completely agree. I am doing it now. It’s really because I have no choice. I don’t want to kill myself to make – it takes me two months to make 55.

“If I fight three times in a year, six out of the 12 months of my life are dog (expletive). It’s not worth it to me anymore. But you’re right, I shouldn’t have to do that.”

Only time will tell whether a new division will be introduced or not.

UFC : After her toddler got her sick on fight week, Liz Carmouche had to battle through illness for UFC Boise win