UFC: James Vick says Justin Gaethje will get ‘outclassed’ by him

Surging lightweight contender #11 ranked James ‘The Texecutioner’ Vick will finally get his crack at a top 10 opponent as he takes on #7 ranked Justin ‘The Highlight’ Gaethje at Fight Night Lincoln on August 25. 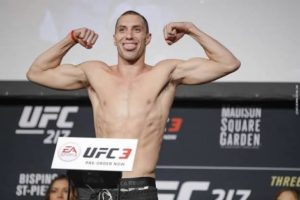 Gaethje (1-2 UFC) has his back against the wall and with the ever forward, chins up fighting style he has, the former WSOF champion is more susceptible to damage. Gaethje thus mentioned in an interview that if he gets completely outclassed by Vick, he may have to hang up the gloves.

Vick however believes if that’s the case, he might as well start preparing for his retirement.

“He’s gonna get outclassed,” Vick said point blank. “I’m fully expecting that I’m going to have to take a few leg kicks. I’m fully aware, because he’s willing to take three or four punches in his face just to land one. So I’m sure that I’m going to take a few leg kicks, but I can condition my leg to take a kick. He can’t condition his chin to take a punch, and the dude’s been knocked out two fights in a row now, and he’s been wobbled in ten of his fights. So, we’re not making it five rounds, and he will get outclassed. My skillset’s way higher than his.”

UFC: James Vick accuses Justin Gaethje of having a padded record, feels Gaethje has been exposed in the UFC

Previous articleUFC: Glover Teixeira feels Daniel Cormier should decide and vacate one of the UFC titles
Next articlePriyanka Singha Roy: The 18 year old martial artist who beat up 3 sex offenders.