The UFC and the MMA world provided Shawn Michaels a reason to smile this past weekend.

At UFC Fight Night 126, surging lightweight contender James Vick (13-1 MMA, 9-1 UFC) in his home state of Texas, earned a decision victory but also tagged Francisco Trinaldo (22-5 MMA, 12-5 UFC) during the fight with the kick. He was eager to show Michaels(via Twitter): 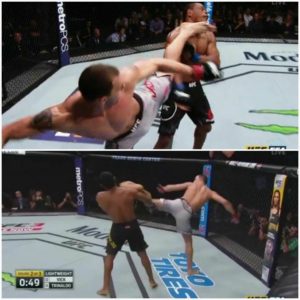 Vick actually got a response from Michaels, who said his signature move “never looked so good”

However this was not only the event which had the tribute to Michaels.Two days before UFC Austin on Friday at LFA 33, In the first AXS TV-televised bout in Dallas, Kevin Wirth (5-0) blasted Isaiah Gutierrez (4-1) with his interpretation of the kick.

Here’s his “Sweet Chin Music,” which stopped the fight (via YouTube):

Other Sweet Chin Music interpretations used in the UFC

On November 8,2014,at Fight night 55 in Sydney,Australia.Flyweight bout on the preliminary card saw another interpretation of this kick as Louis Smolka knocked out Richie Vaculik with the same kick to earn his Performance of the night bonus(via YouTube):

On June 6,2015 at Fight Night 68 in Louisiana,New Orleans,the man who was the co-main event of Austin card,Derrick ‘The Black Beast’ Lewis,got the sweet taste of this sweet chin music from Shawn Jordan (via YouTube):

Other WWE moves used in MMA:

In October 2017,MMA Fighter Jonno Mears shocked the world as he pulled out ‘BOSTON CRAB’ which was Chris Jericho’s move in the UFC (via YouTube):

Previous articleUFC: Conor McGregor now has a new record to his name
Next articleUFC: Mike Perry says that Colby Covington will try to ‘s**k his d**k for 15 minutes’ if they fought