A flyweight showdown between Jarred Brooks and Robert Sanchez will take place at UFC 228 after Sanchez’s original opponent had been forced out due to an undisclosed injury. Brooks took the fight in just five days notice.

This will be Brooks’s first appearance since losing to Jose Torres in a bizarre fashion as he knocked himself out at UFC Utica in June. Brook is also on a two-fight losing streak and he will be hoping to pick up a win in his octagon return. 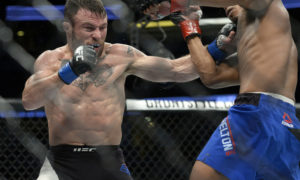 Sanchez, 32, meanwhile, hopes to build off his first UFC triumph. After dropping his promotional debut, “Little Fury” won in his second octagon appearance when he submitted Joby Sanchez in less than two minutes at UFC Fight Night 126 in February. A former Legacy Fighting Alliance flyweight champion, Sanchez is 1-1 since joining the UFC.