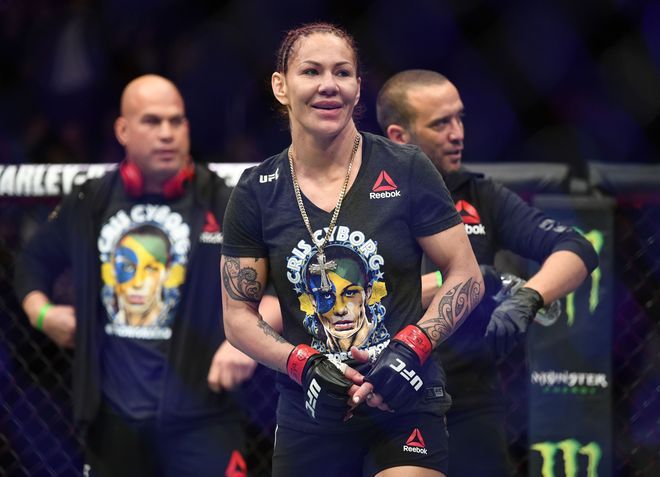 Cris Cyborg made quick work of Yana Kunitskaya last week at UFC 222. The victory was another major addition to the already impressive resume of the Brazilian. She is now pushing the idea of a super-fight with fellow Brazilian champion Amanda Nunes.

Cyborg’s boxing coach Jason Parillo feels that Amanda Nunes will be the perfect stylistic match for the Women’s Featherweight champion.

“Amanda Nunes, she obviously is a world champion. She’s the one who actually called Cris out to begin with, from what I understand. I like it. I love it. Any fight that can draw a lot of attention for Cris, I like. She deserves to be recognized around the world. She is obviously one of the most dominating fighters – not just female – out there. Realistically the bigger names, the bigger attraction. I would love to see a fight with her and Amanda.” He told MMA Junkie.

The mistake of Kunitskaya

During the interview, Parillo also commented on the mistakes that Kunitskaya made at UFC 222. He opened up about how the Russian underestimated the knockout power of Cyborg.

“Cyborg can punch. For this girl to even think for a second (that she doesn’t have power) – she might have thought because her training partner Holly Holm was able to go the five rounds with her. I think Holly Holm put every inch of her heart into that fight, and with all her boxing experience – 36 boxing fights and all the experience that she has – she was able to go roll with the punches a little bit more. But I think Yana read that a little wrong. Cris went out there, touched her with that right hand, and let her know she can crack.” He added.

The 32-year-old Cyborg is 20-1 in her professional career. Her only loss came back in 2005 in her pro-debut after which Cyborg has been tearing through her opponents with a string of dominant performances.