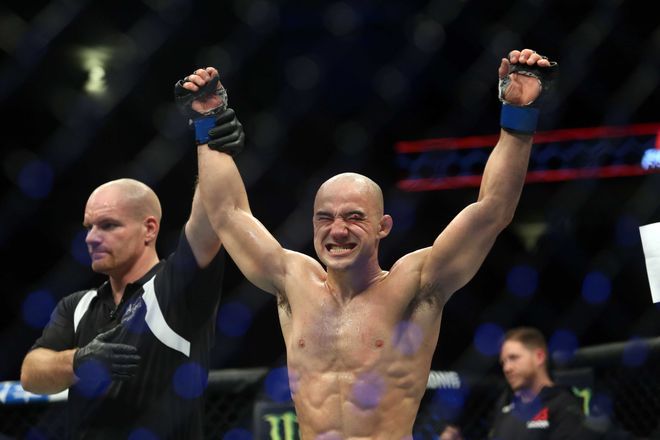 A bantamweight showdown between Jimmie Rivera and Marlon Moraes is reportedly set to headline UFC Utica. According to reports on ESPN and MMA Fighting, the fight is currently being targeted for the event which will be held on June 1 at the Adirondack Bank Center in Utica, New York.

Rivera, who holds an impressive record of 21-1 to his name, was supposed to face former champion Dominick Cruz a few months back. However, the fight was called off after Cruz suffered an injury. Moraes had expressed his interest to replace Cruz but the fight did not materialize due to lack of time.

Rivera and Moraes then engaged in a few interesting twitter exchanges which in turn made UFC plan the fight for UFC on FOX 28. Later, Rivera’s honeymoon plans forced the promotion to reschedule and if the reports are right, the fight will finally happen at Utica.

The 28-year-old Rivera is undefeated in the UFC as of now and had secured a unanimous decision victory over Thomas Almeida back at UFC on FOX 25. Prior to this, he had also defeated Urijah Faber. A 20 fight winning streak also adds to the impressive resume of Rivera who has not tasted defeat in a decade.

On the other hand, Moraes is 20-5 in his professional career and has a two-fight winning streak to his name. He defeated Aljamain Sterling via a vicious KO in his last fight. Moraes was last defeated by Raphael Assuncao at UFC 212 and this was his first defeat in more than six years.

With the Bantamweight division heating up, the winner of this potential fight is likely to get a jumpstart in the pursuit of the championship which is currently around the waist of TJ Dillashaw. Interestingly, Dillashaw is waiting for a fight with Flyweight champion Demetrious Johnson and apparently has no plans of defending his Bantamweight gold in near future.

UFC: Yair Rodriguez says that he could not handle the pressure of being the next top prospect